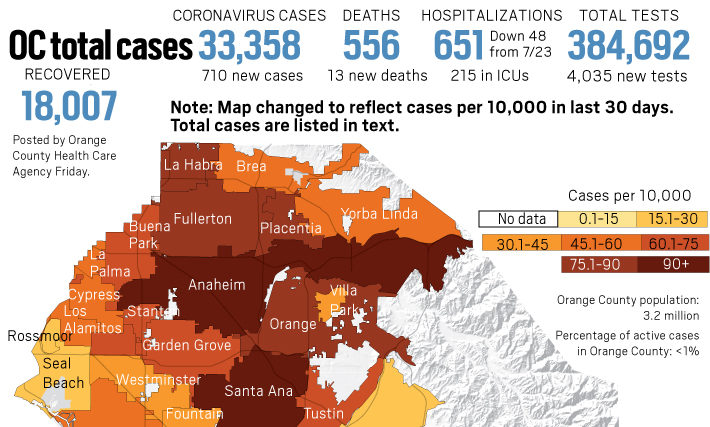 The Orange County Health Agency reported another 710 new cases of coronavirus as of Friday, July 24th.

The total number of positive cases for Orange County is 33,358 since local tests began in March. District officials clarified that they may have tested an individual repeatedly, but if they are positive, they are reported as only one case, even if they have duplicate positive test results.

It is estimated that more than half of the cases, or 18,007 as of Friday, have recovered. The number of people who recovered is based on the previous 28-day cumulative number of cases.

There were 13 new deaths in Orange County on Friday, bringing the total death toll to 556.

Data on deaths in the county are collected from death certificates or collected during the investigation of the case and may take weeks to process, officials say.

Of the 556 deaths, 247 were qualified residents of the nursing home, 1

9 were in care facilities and one was listed as homeless.

The state’s coronavirus panel said there had been 141 deaths in Orange County in the past 14 days.

The state gave a 9.9% positive test to the county, with 99,607 tests conducted in the past two weeks. The reported rate is about 10 for several days.

According to the California Department of Health, there have been 9,903 new cases of COVID-19 in Orange County in the past 14 days.

The state agency also reported 711 hospitalized patients in the past 14 days (suspected and positive) at 33 hospitals in the county as of Thursday.

The state coronavirus tracking board shows that Orange County has at least 47% of its intensive care beds on Friday.

The distribution of deaths in the county is as follows:

The data published every day are preliminary and subject to change, the employees emphasize. More information may become available after the completion of the individual investigations into the case.

Demographics of the cases as of July 20:

What should I do if I miss my second COVID-19 vaccine?