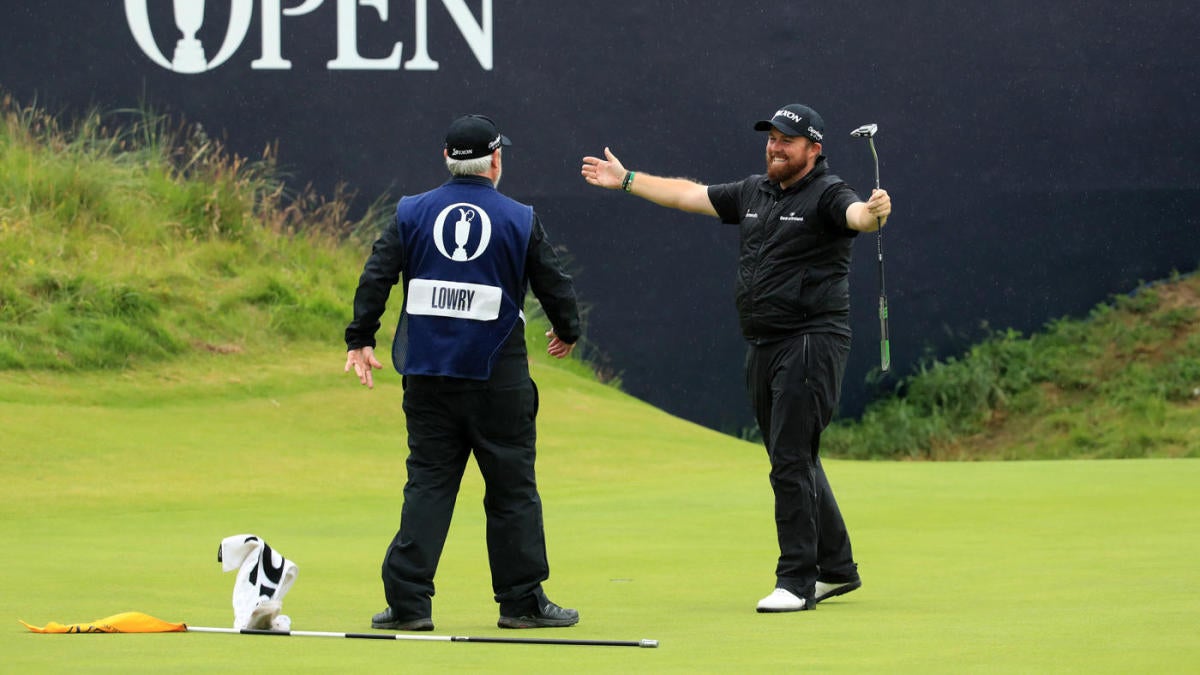 Shane Lowry was able to battle both the athletic conditions at Royal Portrush and the nerves of closing his first major championship as he shot a final round of 72 to win the 2019 Open Championship by six strokes.

Lowry's win will eventually be remembered as much for his Saturday effort than his final round, as the Irishman thrilled the local fans with a third-round 63 that broke the Open's 54-hole scoring record. The energy and adoration was still there for Lowry on Sunday, but the cushion had set left room for a few bogeys that were understandable given the conditions.

2 groups, no one finished only and the best scores, from Tony Finau and Patrick Reed, were 71s. (19659002) Only 15 players totally finished under par with 2018 Open Champion Francesco Molinari posting the round of the day with a 66 on Sunday morning. For Lowry to battle the conditions and emotions of the moment and finish with a 72 was impressive, bringing a celebratory conclusion to the story of the weekend at Royal Portrush.

Here's how the leaderboard looked at the conclusion of the 148th Open Championship:

1. Shane Lowry (-15): Holding on for the win gave Lowry some closure on a journey that started with his 2016 U.S. Open effort at Oakmont. Lowry's inability to convert that 54-hole lead left some damage that needed to be repaired over time, and by his own account it's been a building block for the confidence and form he carried to Portrush this week. Now he's got that first major championship, and this one certainly has a bit more weight and significance given the connections to the region and the course.

2. Tommy Fleetwood (-9): The season started strong for Fleetwood with top five finishes at the Arnold Palmer Invitational and The Players Championship, but the absence of regular title contention in bigger tournaments since March saw his world ranking fall from No . 11 to No. 20 heading into this week. This finish will reverse that slide in the rankings and could spark a strong finish to the 2019 season.

3. Tony Finau (-7): This marks five top-10s in majors since the start of 2018 for Finau, who maintained his status among the best scorers at the Open Championship in recent years with no rounds over par. The result can also be a good boost for Finau moving forward after having run three straight missed cuts at Memorial, U.S. Open and Travelers Championship earlier this summer.

T4. Brooks Koepka (-6): With this finish, Koepka joins Jack Nicklaus, Tiger Woods, Rickie Fowler and Jordan Spieth as the only golfers to finish in the top five of all four majors in a given year. If there was any doubt as to who has the lead in the Player of the Year race, Koepka's performance and contention here has put that conversation to bed.

T4. Lee Westwood (-6): Several times we saw Westwood make a run at taking control of this championship, but every time he was unable to sustain that title contention. His 12 top-five finishes in a major championship are the most of any golfers without a major win, and without taking anything from Lowry, there are certainly a few Westwood fans who would love to be the big story this week at Royal Portrush.

T6. Rickie Fowler (-5): A round of unfortunate bounces started with the worst of breaks, an ominous sign of struggles to come in Fowler's push to chase down Lowry. Fowler's tee shot at 1 was slightly off line and initially bounced in bounds before hitting a marshal and bouncing out of bounds. The penalty resulted in a double-bogey for Fowler, sending him on his way to final round 74.

T6. Danny Willett (-5): The best finish for Willett since winning the Masters in 2016 comes at an event where Lowry's lead was tied to that fateful Sunday at Augusta National. It was a way to keep things interesting as the championship's result seemed to be well ahead of it's conclusion, but while we were going down the memory lane, Willett held his game together in difficult conditions and moving up the leaderboard.

T6. Robert MacIntyre (-5): The 22-year-old from Scotland posted one of the best scores of the day with a 68, and as others began to total up the bogeys, MacIntyre's 5-under championship score continued to move up the leaderboard. McIntyre has recently made the move from the Challenge Tour to the European Tour, so this is the most important result as a pro for this rising star.

T6. Tyrrell Hatton (-5): Even par 71s on Friday and Saturday kept us from ever scoring in Hatton as a threat to the leaders, but his 69 on Sunday secured his third top-10 major finish since the start of 2018 and best Open finish since his T5 at Royal Troon – which, although a top-five finish technically, was 16 strokes behind Henrik Stenson's winning score of 264.

Patrick Reed (-4): It's Reed's best-ever Open finish, and I think it's enough evidence to suggest that he's started to find something special late in the year. Seems fitting that Captain America would peak later in the year, getting his "A" game ready for the Presidents Cup in December.

CBS Sports was with you the whole way Sunday updating this story with the latest scores, analysis and highlights from Round 4 of the 2019 Open Championship. If you are unable to view the updates below, please click here

Thanks for stopping by