80,000-year-old prints reveal the social life of the Neanderthal 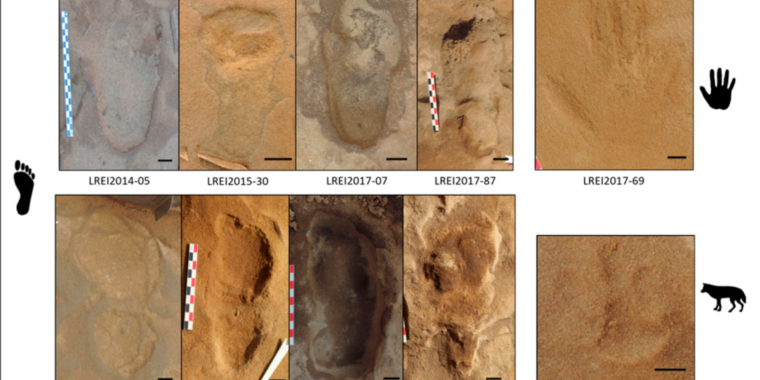 A group of prints left in the mud sands 80,000 years ago gives us a better idea of ​​what a Neanderthal social group would look like long before Homo sapiens showed it was ruining the neighborhood. Stones from the Stone Age

A rapidly growing set of archaeological evidence tells us that Neanderthals thought symbolically, made art and jewelry, buried their dead, and probably tended to their sick and wounded. We have direct evidence of what they ate, what types of tools they used, and how they made those tools. But when it comes to what groups lived and how those groups were organized, the best anthropologist can do a look at how modern day hunter-gatherers live in similar conditions. If Neanderthals live the way hunters live today, they probably spend most of their time in groups of 10 to 30 people, mostly relatives made up of a mix of adults and children.

This fits in well with the predictions that many people might live in some of the Neanderthal sites that archaeologists have excavated. These are good ways to develop ideas for Neanderthal social groups, but they are still indirect. On the other hand (ha!) Archaeological evidence does not get much more direct footprints.

Since 2012, archaeologists working in Le Rozel, Normandy, have carefully uncovered 257 Neanderthal prints, along with eight hand prints, in a layer of fine, dark sand deposited 80,000 years ago. Scattered among the remains of stonework, animal fishing and fires, the prints retain a ghostly picture of Neanderthals walking around their lives.

And archaeologists can be sure that the prints came from Neanderthals. Although evidence continues to suggest that early humans ventured much further, far faster than we had previously given them credit for, it is still a stretch to think that Homo sapiens (or anyone other than the Neanderthals) would have traveled to Western Europe 80,000 years ago.

Jeremy Duvot of the National Museum of Natural History of France and his colleagues also compared the size and shape of Le Roselle's prints with those of Homo sapiens and of much earlier homins called Australopithecus (recorded in Australopithecus). Laetoli, Tanzania). Le Rozel's prints were proportionally wider, especially in the middle of the step, than Homo sapiens . And the Le Rozel prints offered thicker, sturdy steps with shallower arches than the average Homo sapiens – exactly what you'd expect based on the fossil remains of Neanderthal steps.

This makes Le Rozel a very rare, very important object, because so far archaeologists have found only nine other Neanderthal prints at four sites scattered throughout Eurasia. And besides the 64-year-old hand-stencils traced on the walls of the Spanish cave of Malthraviso, the eight handprints left in Le Roselle's sludge are the only discovered Neanderthal handprints.

Most prints are just single steps preserved here and there, not long groups of songs. But they give archaeologists an idea of ​​how many Neanderthals lived in Le Rozel at one time. In the Pleistocene dunes in Le Rozel, the muddy sand would maintain good traces, and wind sand would quickly fill and cover them. As a result, archaeologists can rest assured that all Neanderthals whose prints appear in the same layer of sediment were circling around Le Roselle at the same time.

Duvo and his colleagues say that the prints record the presence of between 10 and 13 Neanderthals. This is in line with other anthropologists' estimates of the size of Neanderthal groups; Le Rosell's group seems to have been relatively small by the standards of modern hunter-gatherers, but not small enough to be unusual.

Imprints also provide clues to the Neanderthal group's makeup because scientists can also use the length of the imprint to estimate growth and build a person. For modern humans, anthropologists already know the average ratio of the height and length of the footprint, but for Neanderthals Duvo and his colleagues had to take a longer route. (Shape yourself: this becomes a bit esoteric.) From the length of the footprint, it is easy to calculate the length of the second metatarsal (one of the bones in the middle foot) because it correlates really well with the total length of the foot. And we have enough fossils for the Neanderthals to know that the second metatarsal is usually about 17% as long as the femur (femur), which is almost the same as Homo sapiens . The femur length, in turn, can be used to calculate a person's overall height.

104 prints of the object, including this one, have been sufficiently preserved for study and made on flat land without sliding, i. so that the archaeologist can get accurate measurements.

At least one of the Le Rosell Neanderthals looks unusually tall and stands about 175 cm (5 feet 9). This is slightly above the average of 168 cm (5ft 6 in) for a Neanderthal. But based on the size of the prints, it seems that the group is predominantly children and teens, outnumbering adults by at least four to one. The smallest prints on the subject were only 11.2 cm (4.4 inches) long, approximately the size of a 2-year-old child.

The high proportion of Neanderthals in Le Rozel is slightly different from that of most modern hunter-gatherer groups, which tend to have more adults. And this also stands out from the handful of sites where groups of Neanderthals may have died at the same time in some catastrophic event, because those groups also tend to have more adults than children. In El Sidron Cave in Spain, for example, archaeologists have discovered the remains of seven adult Neanderthals, five adolescents and a baby. But archaeologists are generally not entirely sure that sites such as El Sidron or Sima de los Huessos are actually storing the remains of groups that died in one go.

If the groups of fossilized Neanderthals in El Sidron and Sima de los Huessos do not live and die together, then Le Rozel's prints offer a first look at what a Neanderthal group looks like. But if other sites are indeed fatal images of Neanderthal groups, then Le Rosell reveals that not all Neanderthal groups look alike. This kind of social diversity is not really surprising; after all, not every human family has the same structure, and we have good reason to believe that the Neanderthals are not so different from us.