A Mystery Disease Is Killing Children, and Questions Linger About Lychees 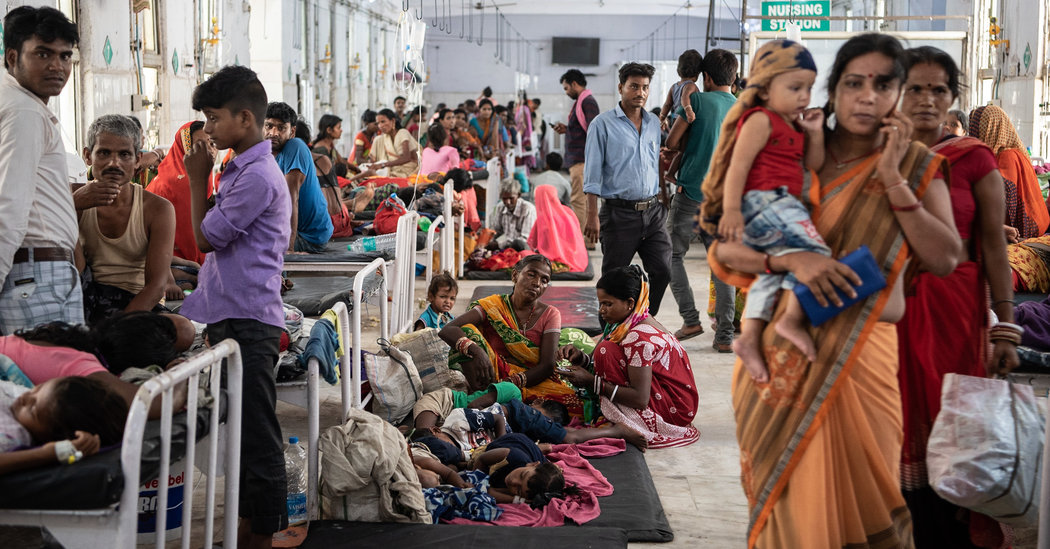 MUZAFFARPUR, India – Every year, and a mysterious disease stalks the area around the eastern Indian city of Muzaffarpur, killing children seemingly at random – there, and nowhere else

It mostly afflicts poor children younger than 10. They go to sleep, seemingly healthy, and wake up with a high fever and brain swelling that leads to convulsions, seizures and, in a third of cases, death – often within 24 to 36 hours

Two years ago, researchers declared the mystery solved, saying the cause was the prized lychee fruit that grows around this area during the hottest months of the year. A chemical in the lychee caused hypoglycemia, and a catastrophic fall in the child's blood sugar, when consumed on a empty stomach, they found. That's more likely to happen to a poorly nourished child with no reserve of glucose, the chemical form that sugar takes to be digested by the body

As a result of research sponsored by the Centers for Disease Control in the United States, published in the respected British medical journal The Lancet in 2017, the health authorities began to warn families to ensure that children did not eat lychee without a meal. Cases plummed from hundreds each season to only a few dozen.

Until this year. There were hundreds of cases again – 719 as of Monday, with 152 deaths – all among poor children here in the Muzaffarpur lychee belt, in a heavily populated area of ​​Bihar State. And this time, doctors say they are finding many cases in which lychees were not a factor.

The treatment epicenter is Sri Krishna Medical College and Hospital in Muzaffarpur, where 102 of the deaths occurred this year. That's a 27 percent fatality rate for the disease at that hospital, according to BrajMohan, the doctor in charge of a pediatric recovery ward there. On Friday, there were 65 children sharing 40 beds in his ward, and 16 mattresses in a corridor accomodated by 30 others

Most of the children

These were the lucky ones who survived the hospital's three pediatric intensive care units. who got sick this time were younger than 5, and many were only 1 or 2 and still breastfeeding, said Dr. BrajMohan, who uses just one name. "They were hardly eating lychees at that age," he said.

"It's a kind of virus or bacteria, we just haven 't detected it yet, "said JP Mandal, who, like Dr. BrajMohan, a pediatrician and a medical professor. "You have to transport samples to labs at minus 80 degrees Celsius, when the temperatures outside are 45 degrees – no wonder we have not found it," he added. (Forty-five degrees Celsius is 113 degrees Fahrenheit.)

But decades of searching have failed to find any microbe responsible for what locals often just call the "Lychee disease." Even during seasons when hundreds fall ill, there are not clusters of cases among families or communities – usually just one in a village, which undermines the infectious disease theory

But if lychees are to blame, some ask, why are there no cases in other lychee-growing areas in India, or in other countries, for that matter? And what accounts for deaths among children too young to eat fruit, or those that have occurred outside lychee season

"Why we have so many cases of hypoglycemia needs investigation," said the superintendent of Sri Krishna Hospital , Sunil Kumar Shahi. "But the lychee has no relation to it."

The countryside around Muzaffarpur accounts for up to 70 percent of lychee production in India, which is the second largest grower of fruit after China.

"We all eat lychee around here," said Kamini Kumari, whose 3-year-old daughter Anupa fell ill with convulsions but recovered after days in the hospital. "But we do not let the kids do it on a empty stomach."

Ms. Kumari lives in Minapur Block, and the farming area where there have been 47 confirmed A.E.S. cases this year.

In another Minapur village, a 15-minute drive from Ms. Kumari's, Rani Devi, lost her 5-year-old daughter, Gunja Kumari, to the disease this month. She went to bed on a stomach but she did not eat lychees that day, Ms. Devi said; she was waking up and convulsing and died the next day

"She was the healthiest of my four children," said Ms. Devi, 24.

Aakash Shrivastava, a scientist at India's National Center for Disease Control, who was the lead author of the Lancet report, said senior officials had ordered him not to discuss the outbreak. Repeated attempts to reach the center's director, Dr.

Officials from the Centers for Disease Control who are based in the American Embassy in New Delhi declined to comment on the outbreak, according to an embassy spokeswoman. a pediatrician and one of the authors of an early scientific paper on the disease, said that scientists were still convinced by the lychee theory – even if it said so has become problematic. He blamed government laxity for the surge in cases this year.

"The government just did not do what they should have done," Dr. Shah said. "They did nothing. At first they paid attention, but then 2017, 2018, there were few cases – last year only 25 cases, and they became complacent, "he said.

Kaushal Kishore, a state health department official, denied that the authorities had was amiss in not pursuing the lychee connection. "Nothing's clear about the causative factor, the causative agent has not been zeroed in," he said. "How can we blame a specific food? It has to be based on research and evidence, and there is no evidence. "

The authorities have been going to door to door in the affected area, looking for children with symptoms and telling parents what to do, Mr. Kishore said. In recent days, deaths from the disease have started to taper off.

Hospital admissions for the disease have also declined, as officials spread the word about first aid that parents could easily administer: feeding sugar and salt to a stricken child right away . If symptoms persisted, they would quickly bring the child to a hospital, where an intravenous infusion of dextrose and electrolytes was the primary treatment.

"I think we'll find that it's multifactorial, but so far it's a mystery," Dr. Mandal said. "And mystery we have to solve."