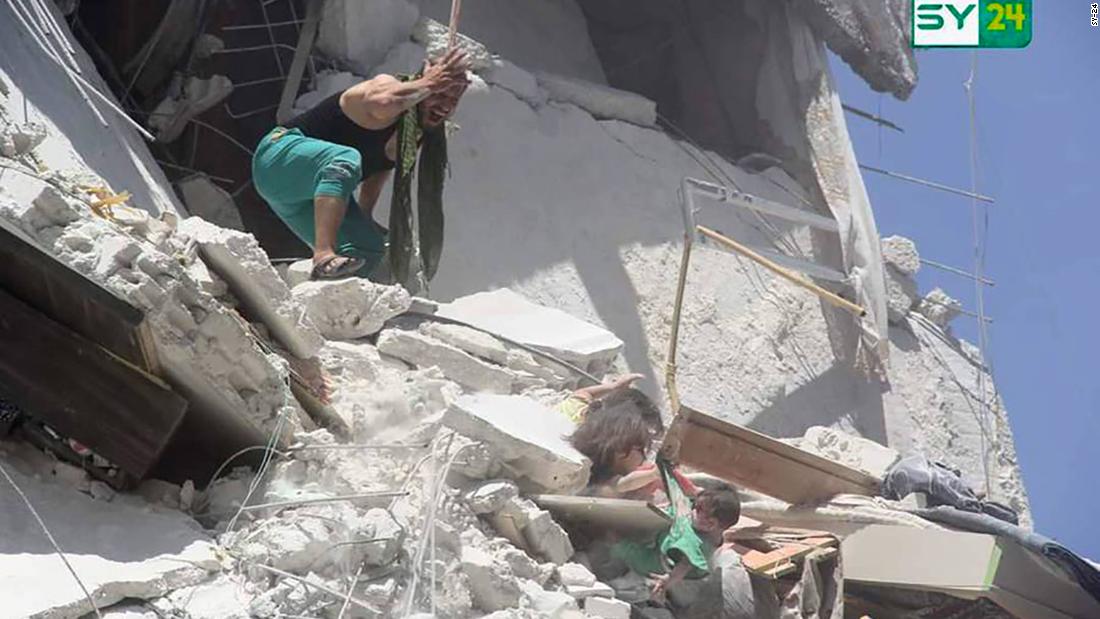 This desperate moment is filmed in a grainy photo taken on Wednesday in the Syrian city of Ariah, Idlib province, by the local media activist group SY24. He reveals the effects of an air strike by Syrian government forces backed by Russia. There is no picture of their mother who died in the attack.

In recent days, dozens of civilians have been the victims of the government offensive, backed by Russia, to regain control over Northwest Syria. Last week, nearly 100 civilians died in similar bombings, according to the White Slam, a volunteer rescue group, also known as the Syrian Civil Defense. areas – the last remaining areas controlled by the opposition. According to the Syrian Human Rights Observatory, hundreds of civilians have been killed, and tens of thousands have been reported as displaced.
More children have been killed in the last four weeks in Idlib province than the total number of perished in 2018 in the same area, a statement released Wednesday shows.

At least 33 children were killed on June 24, compared to 31 children killed throughout 2018, the charity said.

"The current situation in Idlib is a nightmare, the injuries we see are terrifying," said Sonya Hush, director of Syrian Response for the Salvation of Children in a press release. "It is clear that once again the children were killed and injured in indiscriminate attacks." As violence escalates in late April, at least 400 people – including 90 children – have died, says Save the Children.

"Mr. Trump, please stop this, stop this shooting, stop the murder of these innocent people," said a Syrian American woman, Rania Kisar, in an emotional Facebook video earlier this week. Standing in the ruins after an air strike in the city of Maarath al-Nuhman, she said, "Please America, please do something," before going into the wailing. During the week, UN chief for humanitarian affairs, Mark Lakok, warned the UN Security Council that "attacks on civilians and civilian infrastructure must be stopped immediately." according to the UN. "These attacks not only claim innocent lives," says Lockhart. "They also deprive thousands of civilians of basic health services, even when the fight is growing around them," he said, calling the attacks on civilian infrastructure "terrifying."

More than 5.6 million people have fled Syria since 2011 internally displaced, according to the latest UN numbers, as the hope for peace and normality fades.