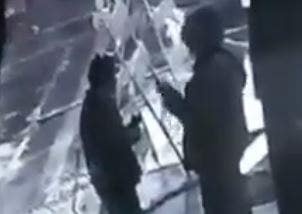 A man in Milwaukee said he threw battery acid at another man's face Friday night, police said, adding that it stemmed from a parking space dispute.

Mahud Villalaz, 42, received second-degree burns on his face, ie. Fox 6 reported. Police did not respond to Fox News' request for comment, but the Journal Sentinel said officers are investigating the incident as a racially motivated hate crime.

Speaking to reporters on Saturday, Villalaz said he no longer felt safe going out.

"I have a fear of being an American citizen," says Villalaz, adding that he is a native of Peru who immigrated to the United States when he was young. "I'm afraid I can't feel safe in my own country with my neighbors."

Villalaz told reporters that he had parked near a Mexican restaurant for dinner around 8:30 a.m. Friday when a man from a nearby a bus stop approached him and spoke to him in an anti-immigrant tone, Sentinel Magazine reports.

"He approached me with those words of hate," Villalaz said. "Return to your country. You do not belong here. This is my country."

9, MARRIED AFTER THE BROTHRAL SHORT THIS ACTION The suspect pulled out a bottle, unbuttoned it and threw a substance over his face, Villalaz said.

The substance was so intense that it burned through his jacket and sweatshirt, Villalaz said. Police are searching for the attacker, who is described as a white man approximately six feet tall with a medium build.

Alderman Jose Perez, in a statement, called the incident a "heinous" crime and an act of "senseless violence".

Woman arrested on suspicion of sending a poisoned letter to Trump