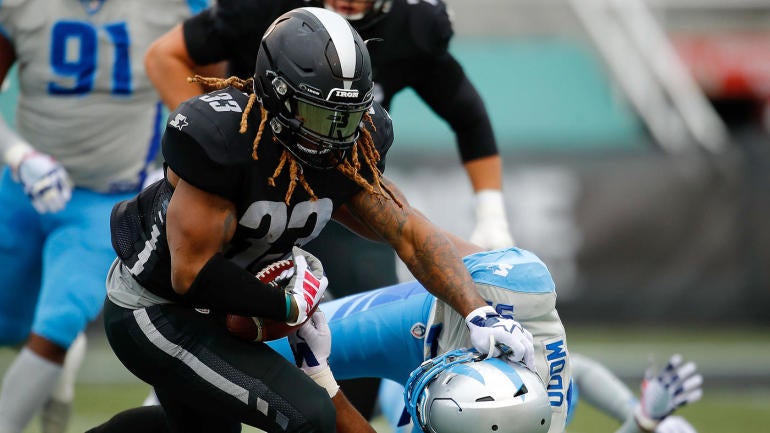 More football? More football. AAF's second week began Saturday with an afternoon game between the Stallions in Salt Lake City and Iron Birmingham. This was followed by a night game with Arizona Hotshots and Memphis Express.

Although both games started slowly, they had huge finesse. Arizona and Birmingham, the two favorites that came in the day, were late for critical turnovers. However, both gathered in the second half and came out with tougher than expected, but huge defeated, though.

The fascinating finals on Saturday were a prelude to favorites on Sunday as Orlando and San Diego? We'll find out soon enough.

CBS Sports was dedicated to being a one-stop shop for all things AAF. Below you will find everything you need to catch up on Saturday games, useful links to key updates and highlights throughout the day.

Late rally places Arizona on top to go 2-0 19659006] It was not as easy as the strange Vegas players made it look like, but the Hotshots had a winning road victory over Express 20-18 thanks to the 14-0 start of the fourth quarter. Initially, Arizona overcame her slow start by pulling out within 12-6, but then dropped her quick touchdown to Memphis to fall 18-6. But then, just as they did in Week 1, the Hotshots became due to the long touchdown by Justin Stockton.

This was followed by an enormous individual catch effort and managed by Hotshots receiver Josh Huff who set up a touchdown strike by John Walford to run back Tim Cook. The Arizona crime did not look like its own week to the last quarter or so in the game, but better late than never.

Arizona discovered that moving the ball was difficult at first. Credit protection for Memphis, which came with two big fourths down, but turning the ball over a bunch (see below) is one way to play bad football. But at the end of the third quarter, the Hotshots finally managed to keep moving, which led to the much needed touchdown of John Wolford to Rashad Ross in order to be mastered.

However, Memphis reacted immediately with his own 75-yard jump, started from Zach Sty's 50-yard mileage – Stacey became the first AAF to go back to blackout 100 yards in a game – and ended by Christian Touchdown of Hackenburg. After Arizona returned to the game, it was a response.

Based on the results of Week 1, it was not the start that many had to expect between Arizona and Memphis. A pair of first-quarter turn from Hotshots led to nine points for expressing – their first of the season. First, Memphis received a great starting position when the Hotshots broadcaster Josh Huff took the ball after he had leveled in the middle of the field. This led to the goal of the express field.

After that, John Walford's set-off put Memphis to mark his first touchdown of the season, thanks to Zach Stacy running. Wolford's second crossing in the second quarter led to another goal in the Express Field, and Hotshots failed to turn their fourth-down experience to the turn of the 50s, which for all intents and purposes was made as the fourth turnover. Trent Richardson put "Iron Forward" for good with the late TD

Once again, it was not a huge statistical day for Trent Richardson's Iron Series. But just like in Week 1 against Memphis, it looked stronger as the game continued.

Richardson joined for a late touchdown to give Iron a 12-9 lead in just under five minutes. The back flight was hampered by a traumatic injury, so it's sincerely astonishing that it was as effective as it was on Saturday, showing the ability to move the pile but also to catch the ball from the background.

The foals had yet another chance to finish the match with a 48-yard goal but Taylor Bertolet pulled the line to finish one for four per day with another potential experience that was interrupted due to a bad moment. Throw into the fluffy hole that Birmingham has become the first points of the day (more on this below), and it really was a game to forget about Salt Lake's special team.

Two more pulses have been brought to the Birmingham

And now two pulses have led to a touchdown, although the last one from the Stallions guy DeMornay Pierson-El will certainly be more controversial. Piererson-El took the ball in the third quarter during the strike of the iron, which was restored to touchdown. However, Salt Lake challenged the call.

The immediate repetition took several times to see if Pierce-El's knee had fallen before the ball came out. Ultimately, however, the replay was unable to find enough evidence to cancel the pitch. Salt Lake fans will not be happy with the decision, but it was a great time for Iron to return to this game.

Although controlling the game for most of the first half, iron is 9-0 to half thanks partly to the return of Puan Bray gave the stallion a good position on the field of the 27-yard line in Birmingham. Four plays later, Joe Buonon rushed to the score.

The half-time result is a bit surprising given that the Stallions are starting a quarterback quarterback, Austin Allen, who has, of course, been trembling for most of the first 30 minutes. However, running back to Brandon Oliver was a working horse with 40 yards on the ground and some traps from the background. He put the crime on his back.

Birmingham did not take advantage of its offensive holdings and had a rough end in the second quarter. After Salt Lake City ended, Iron failed to turn a fake pony into its own territory, which led to Stallions's later goal. Iron loves playing football, but it is not necessarily played back – even if Salt Lake has its own problems.

Richardson is active, Woodrum has appointed a third QB

One week after the season and the damage reports are already being filled. The biggest name this week is the Iron Workout of Trent Richardson, who was slowed by trauma on the right cart. He is active on Saturday, but this week he was practically limited and did not attend Thursday. Richardson rushed for a pair of touchdowns in the 26-0 victory over Express last week.

Another key name mentioned in this week's injury reports was Salt Lake City's defender Josh Woodrum, who also suffers a tendon injury he suffered during the first half of last Sunday's loss to Arizona. He is referred to as the third defender against Iron, so do not expect to see him this week. It did not participate in practice on Wednesdays and Thursdays and was limited on Friday. Austin Allen was named starter-defender for the stallion just before the start.