After all, is physics not "broken"? We're close to solving the proton-radius puzzle 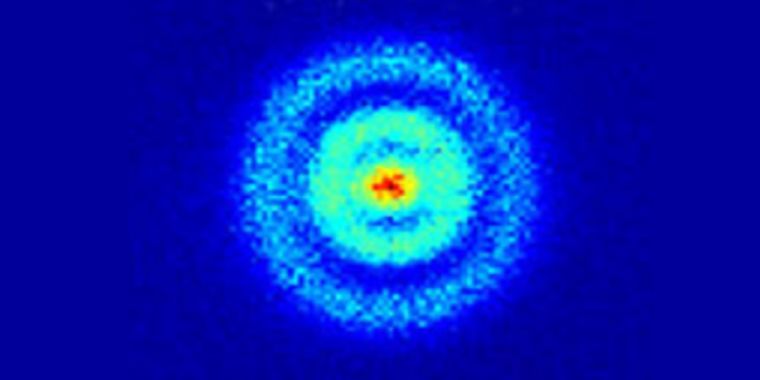 Physicists at the University of York at Toronto have spent the last eight years carefully conducting a sensitive experiment to measure the radius of a proton in the hope of resolving contradictory values ​​obtained from several similar experiments conducted in the last decade. This puzzle is called a "puzzle with a proton radius". New findings published in a new Science article confirm the 201

0 finding that the proton is significantly smaller than scientists had previously believed.

Most promotions discussing the structure of an atom rely on the very malignant Bohr model in which electrons move around the nucleus in circular orbits. It's good as a door medicine to physics, so to speak, but quantum mechanics gives us a much more accurate (albeit stranger) description. The electrons do not actually circle the nucleus; they are technical waves that acquire particle-like properties when we do an experiment to determine their position. While orbiting an atom, they exist in a superposition of states, particles, and waves, with a wave function covering all probabilities of its position at one time. Measurement will collapse the wave function, giving us the position of the electrons. Make a series of such measurements and draw different positions that lead to a result, and this will lead to something like a fuzzy orbit model.

Quantum strangeness also extends to the proton. Technically, it consists of three charged quarks bound together by a strong nuclear force. But it's blurry, like a cloud. And how can we talk about the radius of a cloud? To this end, physicists rely on a charge density similar to the density of water molecules in a cloud. The proton radius is the distance at which the charge density falls below a certain energy threshold. And it is possible to measure this radius by examining how the electron interacts with the proton, either through electron scattering experiments or by using electron or muon spectroscopy to examine the difference between atomic energy levels. (It's called "Lamb Replacement," after Nobel laureate Wallis Lamb, who first measured the change in 1947.) The combined vagueness of electron and proton means that an electron can be anywhere in this region – including within the proton. [19659004] Hydrogen atoms are the simplest nuclei, with one proton orbited by an electron, so usually these are the physicists who have used for their experiments to measure the radius of charge of a proton. For a long time, the accepted value was .876 femtometers – the "global average" of many different measurements with enough error bars to allow for future measurements.

This is the measurement of muon spectroscopy, which first caused a problem in 2010. For their experiment, physicists at the Max Planck Institute for Quantum Optics used muon hydrogen, replacing an electron in the orbit of a nucleus with a muon, heavy (and very short-lived) close to the electron. Because it is nearly 200 times heavier than the electron, it is much smaller orbital and thus much more likely (10 million times) to be inside the proton. And this makes it ten million times more sensitive as a measurement technique because of its closer proximity to the proton.

Randolph Paul, one of the physicists who did the original experiment in 2010, explained the basic concept of the 2013 American Physical Society meeting. "Let's say the proton is a charge ball. The electron is dancing through the proton," he said. "When it is centered on the proton, it is attracted equally from all sides, with charges all around it, so there is no net attraction between the proton and the muon. This shifts the entire energy state up. This is the effect we are looking at with laser spectroscopy. when measuring the difference between two energy levels: when the electron is inside and out of the proton. "

Physicists expected to measure approximately the same radius for the proton as in previous experiments, with only less uncertainty. Theoretically, there should be no difference (except mass and life) between electron and muon. Instead, they measure a much smaller proton radius than 0.841 femtometers, 0.00000000000003 millimeters smaller, far beyond the established errors. This was a strong 5-sigma result – five standard deviations from the value obtained by other methods.

"It certainly makes a pretty strong case that the small size is the right size."

Pohl et Al . they spent years checking and re-checking their data, so if it was an experimental error – or if the basic theory of quantum electrodynamics (QED, which describes how light interacts with matter) was somehow incorrectly applied – it is significant. Theorists ponder whether QED may need to be adjusted to take into account the possible slight differences in muon properties. Most exciting possibility: this may be a hint of new physics beyond the standard model. This has always been the least likely explanation, and in the next decade it becomes even less likely.

Subsequent measurements from different groups are not convincing whether the greater or lesser value is correct. For example, in 2013, a large international team carried out experiments based on muons, which confirmed the value for 2010, producing a measurement of 0.84 femtometers for the proton radius, with a statistical significance of 7 sigmas. Another experimental variation in 2016 involved the replacement of an electron by a muon in a deuterium atom – a heavier isotope of hydrogen, a neutron, and a proton and an electron. The idea was that the presence of a neutron would change the way electrons and muons perceive the charge of a proton. This was also in line with the 2010 result with a statistical significance of 7.5 sigma.

However, two experiments using regular hydrogen to measure the proton radius gave mixed results: a 2017 study by the Pohl group also confirmed the result for 2010, while the 2018 measurement was in line with higher value before the 2010 experiment. So scientists at the University of York recently chose to do electronic proton measurement of the radon, similar to the original Muon-based measurement in 2010, hoping to bring different conflicting results to consensus.