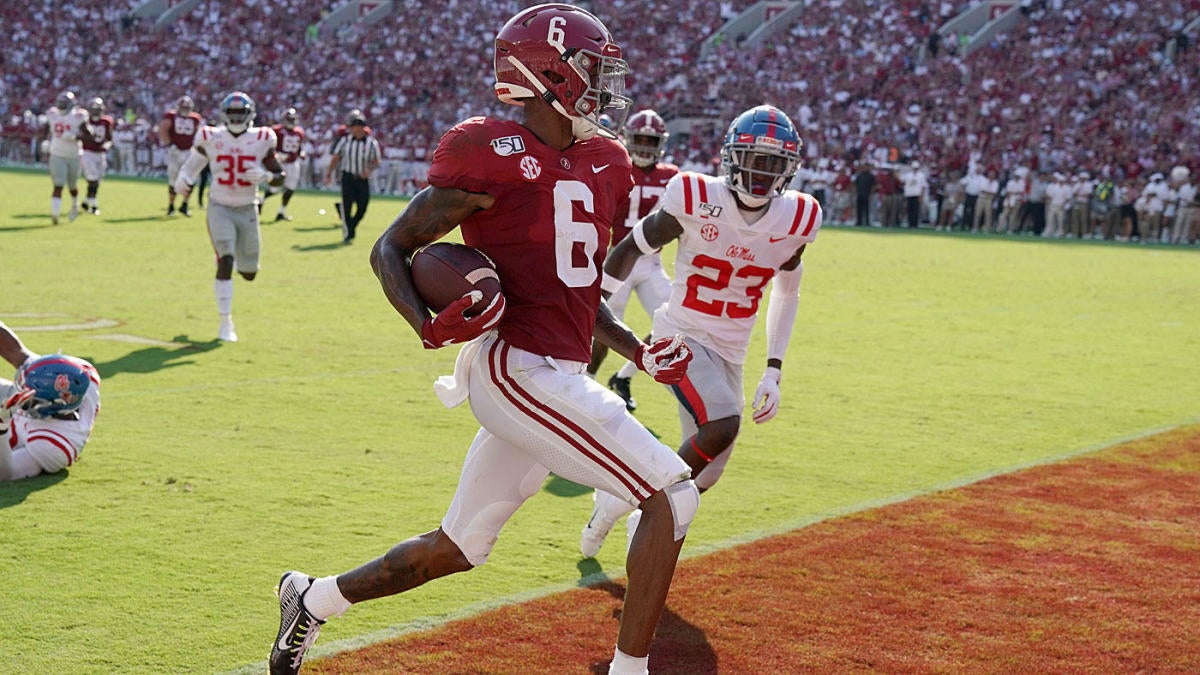 The defense struggled to slow down Rebels quarterback John Rhys Plumlee early. Freshman starting at injured QB Matt Corral did his best work on the ground with 109 yards rushing and a touchdown; he also passed for two and threw an interception but was wildly inconsistent through the air. Ole Miss added a touchdown with 5 seconds to play as backup Grant Tisdale entered, making the final score appear closer than the game was throughout.

What did we learn Saturday afternoon in Tuscaloosa? Let's take a look.

1. Alabama's No. 3 WR scored five times … Think about that for a second. The Ole Miss defense had no answer for Smith's speed and how offensive coordinator Steve Sarkisian moves his receivers around in space. His scores came from 74 yards, 25 yards, 23 yards, 33 yards and 27 yards out; the first four were all catch-and-runs. Keep in mind that he entered the game as the Crimson Tide's third-leading receiver behind reigning Biletnikoff Award winner Jerry Jeudy and speedster Henry Ruggs III. Behind him is the lightning-fast Jaylen Waddle, who doubles as one of the most electric punt returners in the nation. You can't cover these guys. Not with this depth. Not with Tagovailoa spreading the ball around to him.

The running game for Alabama hasn't been up to program standards this season, and Saturday was no different. But the ability of these wide receivers to turn a short pass into a long touchdown is the next-level stuff. Alabama's receivers have transformed this into a southern version of the Mike Leach Air Raid system with yards after catch serving as a new-age rushing attack. There's a reason for this wide receiving corps jokes about playing rock, paper, scissors to determine passing routes. Each one of them can handle every aspect of the position. Today, Smith was the rock (old).

2. The Heisman Trophy is Tua's Too Bad: The college football world's attention has been on former Alabama quarterback Jalen Hurts reemergence at Oklahoma and Joe Burrow's impact on an LSU offense that had been living in the Stone Age prior to this season. If Tagovailoa had slipped your mind, now's the time to start paying attention again. He's sitting at 23 touchdown passes this season and, like last year at this time, hasn't thrown a single interception. He threw for 301 yards in the first half, which was the fifth time in his career that he topped 250 passing yards in the first half of a game.

Don't get "Tua Fatigue." He set the program record for touchdowns on Saturday against Ole Miss after his first two, and he didn't look back after that. Mind you, he's the starter for only a year and a half, and he routinely takes a seat in the second half after building enormous leads. Yes, it helps to have track stars at wide receivers. But he has taken the advice of Nick Saban from the offseason and understands that checking down and not going for a home run on every play is the way to put up enormous stats and put games out of reach in a hurry – which is what happened after a slow start on Saturday.

3. The New Kid Can Ball: Ole Miss had no chance once Tagovailoa and Smith got in their groove, but Plumlee did everything he could to keep them in it as long as he could. The freshman made his first career start after coming in for a injured Matt Corral last week Vs. Cal, and he shouldered the load of offense. The 6-foot, 192-pounder was a solid running primarily a zone read offense. What was even more impressive was that despite his stature, he was running more like Tim Tebow and Dak Prescott. Running backs Scottie Phillips and Jerrion Ealy were counted on the edge as Plumlee handled the tough yards between tackles.

He wasn't intimidated by the atmosphere or physical Crimson Tide defense. In fact, he packed the punch. He sought out contact throughout the game, set the tone early when the Rebels were hanging in and spent that quarterback in the SEC.

CBS Sports was with you the whole way updating this story with the latest scores, highlights and analysis from the game. If you are unable to view the updates below, please click here.