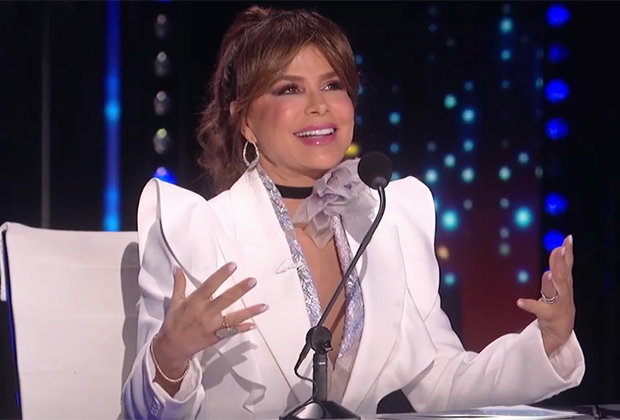 Paula Abdul returned to American idol on Monday, and the world was good again for two fleeting hours. And well, I mean wonderfully weird.

A living legend who served as a judge at the time Idolduring the first nine seasons (2002–2010), he returned to the panel to fill Luca Bryan, who announced that he had tested positive for COVID-19. This brought her back to host Ryan Seacrest, who took her on a gloriously awkward walk down the driveway of memory.

“It’s kind of nostalgic,” she said, returning to Idol. “I feel like I’m visiting my little brother on the show we started with our other brother Randy… and, of course, with our grandfather Simon. [Cowell]. “Seacrest added,”

; He’ll like it, “before clarifying,” He’s not looking. ” hope he does not watch, as Abdul later called him “STD.”)

Then Sikrest and Abdul looked at their photo from the first season of the show, a moment that went down … instantly. “Why do I look like I’m not happy?” He asked. And when Abdul noted that she too not smiling, he asked, “Why were we so unhappy?” Yikes.

Then came the biggest surprise of the night: After Abdul’s performance, Seacrest announced that Wyatt Pike “will not compete in the race. He should have left, but we wish him the best. “Oh, okay? I wish we had a little more information, but at least that explains why Idol returns the players of Season 18 to compete for his place.

Unfortunately, the following finalists did no received enough votes and were therefore sent to the danger zone: Colin Jamieson, Madison Watkins, Bean, Alanis Sofia and Graham DeFranco. The referees got a chance to save only two and eventually decided to keep Watkins and Bean in the game.

Read about Monday’s performance breakdown, with official videos added when they become available:

CASEY BISHOP, 16 | The first one released this week, Bishop made me shudder from the moment he began singing The House of the Rising Sun. Not only was this another perfect choice for her eternal voice – which has more tricks up its sleeve than the perverted Mary Poppins – but it really set the tone for the rest of the night. I watch:

COLIN JAMESON, 22 | First of all, I have to commend Jamieson for performing Dean Lewis’ “Waves,” as he did, given that he had just he was said to be the first athlete to go into the danger zone. Something about the transmission of this news felt out of place. That said, that’s exactly what we expected from Jamieson – the energy and the notes were there. (What more do you want, America ?!) Click here to watch.

DESHAWN GONCALVES, 20 | This Ohio-born turned out to be in a much better position, getting good news from Seacrest before he started to feel good in Stevie Wonder’s performance of “Higher Ground.” It was sweet, and Goncalves was obviously having fun upstairs, but I was hoping for something a little more impressive. In honor of Goncalves, this was his first high-pitched song in the race. This is growth. Click here to watch.

KASANDRA KOLEMAN, 24 | I had the feeling that we saw Coleman in her purest form during the performance of The Light of Maggie Rodgers. I came across the ethereal quality of her voice, although she often loses control of it amid the pressure of the race, and I’m excited to see what else she is preparing us for. I watch:

KALEB KENNEDY, 16 | I’m still not the biggest fan of this objectively talented teenager, but that’s only because I can’t understand him. And the judges can’t either. How can the same person who gave us absolutely Nothing during this pre-performance interview, turn around and become a completely different person once the music starts playing? We’ve crossed the line to discuss whether Kennedy has chops (he does!), But I really want him to give us even hint of a person to cling to. Click here to watch.

MADISON WATKINS, 26 | I can’t say I ever expected to hear Drake’s “Hotline Bling” performed by Idol racer, but I definitely didn’t hate him. Watkins recreated the late night love anthem as a sultry song before stepping things up with a lot of emotion and a little vocal gymnastics. I was not surprised to see her in the danger zone, although I would not put her there. Click here to watch.

AVA AUGUST, 15 | I love that the youngest finalist in the competition chose one of the oldest songs of the night – “Love of My Life” by Queen and showed everyone how it is Done. Angelic in both visual and vocal performances, her performance was simply divine. Click here to watch.

Bob, 23 | Guys, I think I could be baby Beanie? I wasn’t terribly surprised when Seacrest sent him into the danger zone, but I was it was surprised at how much I enjoyed his performance of Ben Platt’s “Grow As We Go”. Beautiful, emotional, authentic. There was no hint of a wedding singer on stage tonight, just a legitimate artist shaking me with his magical voice. (Okay, yes, I’m definitely baby Beanie.) Watch:

CHEIS BECKHAM, 24 | Once sent to a safe place, unbelievable the relieved Beckham drew encore audiences from his listening song, Colton Moore, and Clever Few’s “What Life Kills.” That was all we expected from Beckham – from a boisterous voice to an all-black ensemble – and it was very good. However, it was very good in the way that even Grammy has a few performances that double as bathroom breaks. He has always been in the top 10 shoes, but if he really wants to stand out from some of his more defined competitors, Beckham must take a page from Katy Perry’s book and give us fireworks. Click here to watch.

ALYSSA WRAY, 19 | A few weeks after smashing “I’m Your Baby Tonight,” Uray returned to the stage with a solid idea of ​​Whitney Houston’s slightly more dramatic ballad, “The Greatest Love of All.” I’m sure she could sing the phone book and sound exciting. Click here to watch.

ALANIS SOFIA, 19 | Real conversation: I even have to applaud Sofia experience this provocative transmission of Demi Lovato’s Heartbeat, which is difficult enough in itself. And she absolutely killed him … until she did. I was impressed with the jump, but by the end of her performance, the high notes just weren’t there. It became uncomfortable to watch and even more unpleasant to listen to. Click here to watch.

WILLY SPENS, 21 | I’m so glad Spence chose to sing Rihanna’s Diamonds because that’s exactly what he’s like as a performer – a monstrous diamond. Not only was this another impressive performance, vocally speaking, but it was easy and the most confident in Spence. He was alive while he sang this and the energy was contagious. Depending on America’s mood at the moment, he could really win this thing. I watch:

GRACE KINSTLER, 20 | Not all ladies wear crowns. Just look at Kinstler, who killed Ariana Grande’s “Dangerous Woman” this week. Her voice, her confidence – she is the full package. Lionel Richie was right when he called it a show, “Oh God,” and something tells me that Grande would say the same thing. Click here to watch.

HUNTING TARGETS, 22 | The last contestant sent to safety, this Tennessee native, celebrated with a wonderful performance of Bonnie Wright’s “I Can’t Make You Love Me.” I didn’t find the Mets to be the most dynamic artist this season, so I really appreciated the emotion he was able to instill in this performance. Click here to watch.

GRAHAM DEFRANCO, 28 | Maybe because DeFranco was the last singer sent to the danger zone, but there was something particularly bitter about his performance of Jason Isbel’s “Cover Me Up.” And make no mistake, it was very good – the kind of performance that makes you wonder how it wasn’t sent. (Oh, America, you are so fickle.) Click here to watch.

Your thoughts on Monday’s results? Abdul’s return? Whatever you think Idol,, post it in the comment below.