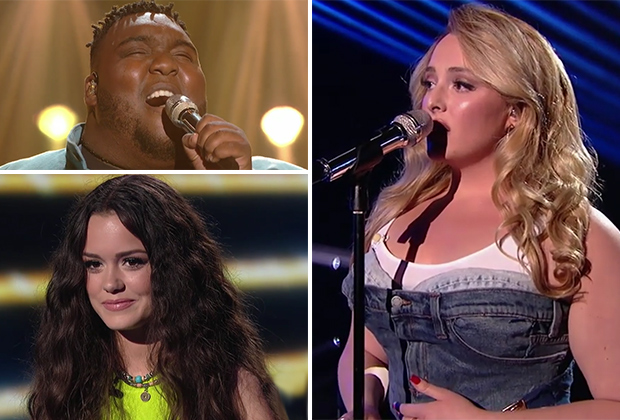 The special edition for Mother’s Day on Sunday American idol definitely justified his name, as two favorite singers of the fans were hit. Plus, Top 7 performed songs on Coldplay – the unofficial group of moms everywhere!

As always, let’s start with the results. After America’s votes were collected, Arthur Gunn and Hunter Mets were banished. That leaves Casey Bishop, Chayce Beckham, Willie Spence, Caleb Kennedy and Grace Kinstler as the Top 5 of the season.

Read about a breakdown of tonight’s performances, which include Coldplay songs and a tribute to the contestants̵

7; mothers, with the official video being added when it becomes available:

CASEY BISHOP, 16 | One of the youngest singers left in the competition started with Paradise, delivering the relaxed Coldplay jam with all the natural lightness we’d expect from a large power plant. It may not have been the best song choice in the world, but the notes were there – and so was the hair definitely there. I watch:

She followed this up with Alanis Morissette’s “Ironic,” which felt like the perfect choice of song … at least on paper. Don’t get me wrong, I would still lie in front of a fast school bus to Bishop, but this show deviated a bit from the karaoke area for my taste. Eventually it paid off completely, but even the best will give up from time to time. Click here to watch.

CHEIS BECKHAM, 24 | The judges praised Beckham’s alleged artistry, especially the great vocal moments he effortlessly worked on in his performance of “Magic,” but I thought that was good. Honestly, I have a lot more to say about Beckham ‘s hair (did You know that the single strand of hair in the front is called “slut”?!) than I do for the nap song. Click here to watch.

But if you think I will even have unmarried a negative word for “Mom,” the touching song Beckham wrote about his mother, there’s more to come. The judges talked a lot about the “artistry” that Beckham showed, but I didn’t really feel it until this show. Click here to watch.

WILLY SPENS, 21 | Don’t bother me, I’m just cutting onions here! The first contestant of the night to make Coldplay’s song sound like a real original, Spence performed Idol a studio with its signature spiritual sound; I’ve heard “Yellow” about a million times, but never. I watch:

On the other hand, Spence’s mother’s performance of “You Are So Beautiful” by Joe Cocker exactly how I would like to hear it. Did I expect it to become a crescendo in the full bloom of the gospel? Absolutely not. But I call that amen. Click here to watch.

KALEB KENNEDY, 16 | I’m not Kennedy’s biggest fan, nor am I a big Coldplay fan, so I entered this performance of “Violet Hill” with low expectations – and they were definitely fulfilled. Execution was postponed, clean and simple. Luke Brian’s claim that Kennedy seems to be on the verge of “breaking down the galaxy of music” could not be less accurate … or more confusing. Click here to watch.

Kennedy later returned to the stage with an original song about his mother, aptly titled “Mama Said.” And while I’ve been firm with him in recent weeks – even earlier in this brief review – there’s no denying his abilities as a songwriter.

ARTER GUN, 23 | You can tell me that Gunn performed “In My Place” as his first song this week, but I don’t have to believe you. Even Martin was confused by how much Gunn replaced the band’s iconic jam. (“I always thought the tune was the best bit,” he admitted after hearing Gunn’s radically different version.) The end result, I thought, was pretty cool. I watch:

Color me shocked that Gunn chose to perform another classic rock song, in this case Lininder Skynird’s The Simple Man. No, kid. The choice of the song was as heartfelt as the performance itself, and I would be lying if I said I didn’t faint a little when he dedicated it to “all the sweet mothers out there.” Even if you’re still bitter about the turnaround that led to Gunn’s return, it’s almost impossible not to like him.

GRACE KINSTLER, 20 | Known for melting our faces with her bombastic belt, Kinstler chose a more muted atmosphere this week by inviting viewers to an intimate performance of “Fix You.” Even the climax was not as extreme as you would expect from Kinstler, which only proved how versatile the singer really is. My only question: What was this piano doing in the first half of this performance? Did they think he was doing it Frozen again? I watch:

Kinstler maintains the emotions that flow with his second performance, “When We Were Young.” It looked like a million dollars and sounded even better, she crushed Adele’s ballad without sweating. And those notes that she belted in the end! What can I say about this voice that is no longer spoken?

MEN FOR HUNTER, 22 | Did anyone else feel like watching baby Chris Martin on this stage tonight? “Everglow” is another Coldplay song that I’m not very familiar with, so my performance through the angelic vocals and warm demeanor of Metts was the perfect script. Click here to watch.

In a truly charming way, the Mets returned to the stage with “The River,” an original song that showcases everything he has to offer. The notes weren’t always there (blame the emotions!), But love was always there.

Your thoughts on performances and eliminations this week? Post them in the comments below.