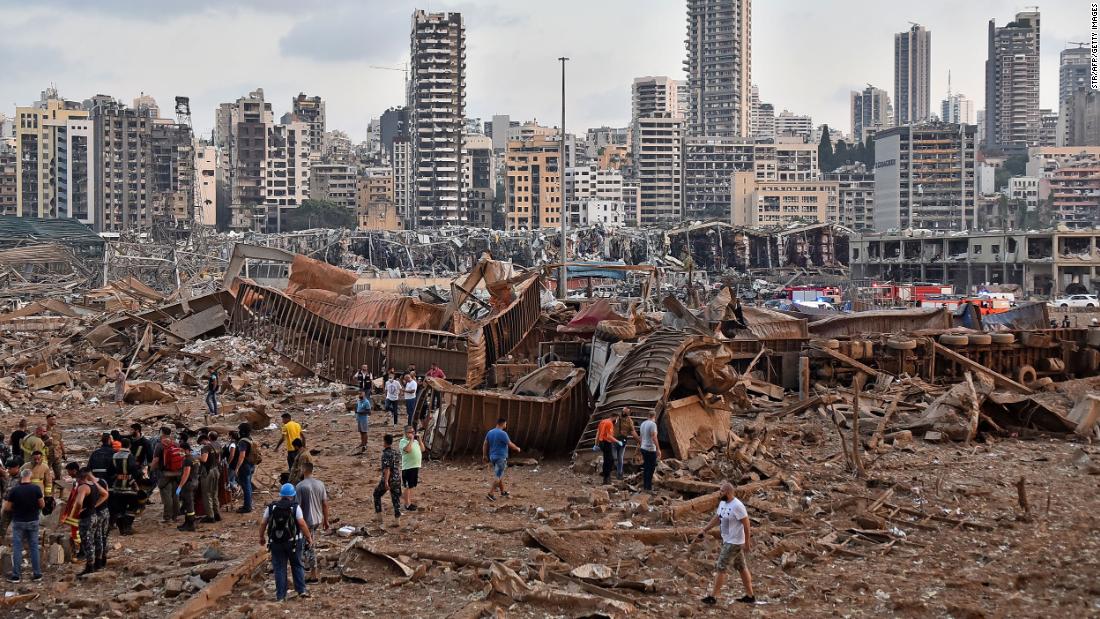 Many people are still missing the day after Tuesday’s blast, and 300,000 have been evicted. Emergency services in the city, already strained by the Covid-19 pandemic, were operating at reduced capacity after four hospitals were damaged. The shock wave of the blast damaged buildings within 10 kilometers (6 miles).

Prime Minister Hassan Diab said 2,750 metric tonnes of ammonium nitrate – commonly used as agricultural fertilizer – had been stored for six years in a warehouse in the port of Beirut without security measures “threatening the safety of citizens”, according to a statement.

Initial state media reports blamed the blast on a large fire at a fireworks depot near the port. The country̵

The director general of the port of Beirut, Hassan Kraitem, said on Wednesday that he knew that the materials stored in “warehouse number 12” were dangerous, “but not to such an extent”. The maintenance was carried out at the warehouse door 12 hours before the blast on Tuesday, according to Kraitem.

“Customs and State Security sent letters [to the authorities] “with a request to remove or re-export the explosives six years ago, and we have been waiting for this problem to be resolved ever since, but to no avail,” Kraitem told local television channel OTV.

Maritime services and documents received from CNN describe a shipment of 2,750 metric tons of ammonium nitrate that was detained in Beirut in 2013. The Russian-owned ship MV Rhosus was destined for Mozambique but stopped in Beirut. due to financial difficulties, which also created unrest with the Russian and Ukrainian crew of the ship.

Lebanese customs director Badri Daher told CNN that officials had written to law enforcement six times calling for the cargo to be removed from the port, but requests went unheeded.

On Wednesday, Lebanese Information Minister Manal Abdel Samad Naid said there were documents and documents from 2014 proving the existence of an exchange of information about the “material” confiscated by the Lebanese authorities. She told Jordan Al Mamlaka’s state channel that the exchange was being considered in connection with the potential cause of the deadly explosion in Beirut.

Asked in a telephone interview if there were any early findings in the investigation into the cause of the explosion, she said: “There are no preliminary results or clarifications.”

The Lebanese cabinet has ordered an unknown number of port officials to be placed under house arrest in the coming days, pending the results of an investigation into the blast, according to displaced Minister Gada Shreim. Those involved in “the storage, guarding and investigation of Hangar 12 from 2014 to the present” will be included in the arrests, Schreim said.

Lebanese President Michel Aoun has promised a transparent investigation into the causes of the blast, promising on Wednesday that those responsible would be held accountable and face “severe punishment”.

Calls for an international investigation into the blast are growing. “Former Prime Ministers Najib Mikati, Fuad Siniora, Saad Hariri and Tamam Salam consider it necessary to ask the United Nations or the Arab League to form an international or Arab commission of inquiry,” a joint statement issued by Hariri’s cabinet said.

He called for the committee to be “composed of judges and investigators who are professional and impartial to begin their duties in uncovering the circumstances and causes of the disaster in Lebanon.”

Amnesty International’s legal group also called for the establishment of an international mechanism to investigate the incident in a statement issued Wednesday.

Ammonium nitrate is an industrial chemical that is often used around the world as agricultural fertilizer and in explosives for mining. It has also been used as a key component in makeshift explosives, particularly in the 1995 Oklahoma City bombings, the 2002 bombings in Bali, Indonesia, and the far-right Norwegian terrorist Anders Bering Breivik in his shooting and bombing. 2011

Following the blast on Tuesday, the US embassy in Beirut called on people in the area to “stand indoors and wear masks, if any” due to reports of toxic gases released from the blast.

Anthony May, a retired ATF explosives investigator for the U.S. government, said the amount of explosives and shockwaves created by the blast “is typical of what would be equivalent to a kiloton of a nuclear bomb dropped when it comes to the weight of the explosives. “

“There was no nuclear material that we know was involved, but the generated shock wave, the generated blast wave, is equivalent to a small nuclear device,” May said.

The death toll is likely to rise among Hiroshima-like scenes

Immediate concerns remain with victims, who are expected to increase further. After the explosion, hospitals in Beirut were overwhelmed with the injured and doctors conducted triage on dozens of injured people in parking lots and sidewalks. Some were so full that they repelled people, one witness said.

“The emergency department looked like a war had started. The children – the arms, the legs. I couldn’t believe what I saw,” said Serge Mahdesyan, a hairdresser in Beirut.

Open lots turned into makeshift field hospitals as people pulled themselves and their loved ones out of the rubble of their homes. Some had broken limbs, others were strewn with pieces of glass. Some patients were unconscious. One of Beirut’s major hospitals, the Dieu Hotel, received about 400 injured patients, a CNN official said.

Relatives of the missing are robbing hospitals in search of their loved ones. Lebanese authorities say hundreds are still missing, including children.

Four hospitals are out of order due to blast damage, Health Minister Hamad Hassan said on Wednesday, adding that the health ministry has an emergency plan, with field hospitals sent from Qatar, Iran, Kuwait, Oman and Jordan. Hassan estimates that six to eight field hospitals will be ready “soon.”

Although only 5,417 coronavirus cases and 68 deaths have been confirmed in Lebanon, according to Johns Hopkins University, pandemic-related restrictions have exacerbated the country’s deep and protracted financial crisis. Power outages are common in the capital, increasing pressure on basic casualty services.

The blast, which occurred shortly after 6 p.m. local time (11 a.m. AD), swept through the city and wreaked havoc on almost every neighborhood in Beirut, registering a magnitude 3.3 earthquake in the Lebanese capital. The crater created by the explosion appeared to be approximately 124 meters (405 feet) in diameter or over the length of a football field, according to a CNN analysis of a satellite image by Planet Labs, Inc.

Footage was taken of the wounded staggering through the streets of the capital; ambulances, cars and military vehicles packed with the wounded.

One resident said the scenes looked “like an apocalypse” and another said the port was “completely destroyed”.

The official residence of the Lebanese president, former Prime Minister Saad Hariri’s headquarters and CNN’s office in central Beirut have been damaged. According to home witnesses, homes within 10 kilometers were also damaged.

City Governor Maroon Abdoud said the scene was reminiscent of the atomic bomb blasts at the end of World War II in Hiroshima and Nagasaki.

“I have never seen destruction on this scale in my life,” Abad said. “It’s a national disaster.”

The Lebanese Red Cross asked the public on Twitter for blood donations to help the wounded and said it had opened triage centers and first aid stations to help people with non-critical injuries. All his ambulances across the country were sent to the capital to support the rescue and evacuation of patients.

The Philippine embassy in Beirut confirmed on Wednesday that two of its citizens had died in the blast. Eight other Filipinos were injured, including one in critical but stable condition. Two of the injured were part of a group of 13 Filipino sailors whose ship was moored “about 400 meters from the blast area,” the embassy said, adding that the other 11 were reported missing.

Four Bangladeshi nationals were killed and nearly 100 others were injured in the blast, Bangladesh’s state news agency Sangbad Sangsta (BSS) said. Among the injured were 21 members of Bangladesh’s navy on duty at the port as part of a United Nations peacekeeping mission, the FSU said, adding that one of the fleet’s personnel was in critical condition.

Australian Prime Minister Scott Morrison said at least one Australian had been killed in the blast and that the Australian embassy building was “significantly compromised”.

Six Turkish citizens, a Chinese citizen, a Japanese citizen and an Indonesian were also injured, according to their governments.