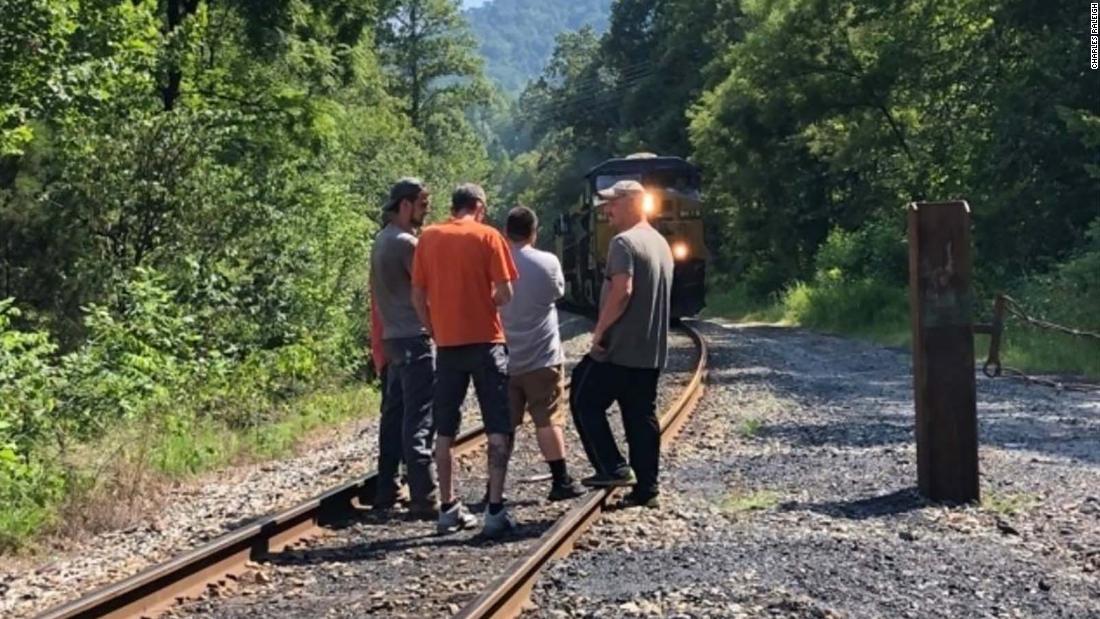 The protest, which has remained peaceful, began Monday after a train was seen going onto the property of Blackjewel, the mine operator that filed for bankruptcy without warning on July 1.

Word quickly spread throughout the community around Cumberland, a town of about 2,200 in Harlan County in southeastern Kentucky. Dozens of miners started showing up to block the tracks – angry that they mined the coal, but didn't get paid for the work.

"We're doing no money, food and everything else before our kids are starting back "We can't even get clothes or anything else for them, it was like a kick in the face," miner Chris Rowe told CNN affiliate WYMT. "That's basically what it was."

At one point, more than 1

00 people were at the scene. Miners occupied their time playing cornhole on the train tracks; other times, they took turns forming a human chain to make sure the train could not move.

A handwritten sign on a piece of cardboard read: "No pay we stay."

Kentucky Attorney General Andy Beshear said he was monitoring the situation and that he had completely backed up the miners.

"Blackjewel failed to pay them for weeks of hard work and the way the company filed for bankruptcy prevents miners from accessing their 401ks, making it even harder for them to feed their families during this trying time, "Beshear said. "What this company is doing to them is wrong – and I'm doing everything I can through my office to help these families. Every Kentuckian should see their plight and support them."

CNN has been unable to reach Blackjewel for comment.

CSX, which owns the rail line, said it had taken "precautions to ensure the safety of our employees and hopes for a quick resolution."

Cumberland Mayor Charles Raleigh said bankruptcy has forced an array of hardships on miners, from them bouncing checks to losing health insurance.

"The miners can't draw unemployment because they were technically not fired and they didn't quit," the mayor said. "They can't get medical insurance, so they're stuck between rock and a hard place."

He said the situation would grow more desperate as the miners begin their second month without pay. "The miners showed up one day and the gates were locked with no notice," the mayor said.

He said some protesters had traveled two to three hours to support "their brother miner." He said many members of the community were pitching in support of the miners by bringing food, water and chairs.

"Why are they not entitled to get paid for the coal they have mined?" Raleigh asked.