Ann Coulter doubles down: Trump will be 'dead in the water' if he does not build the wall 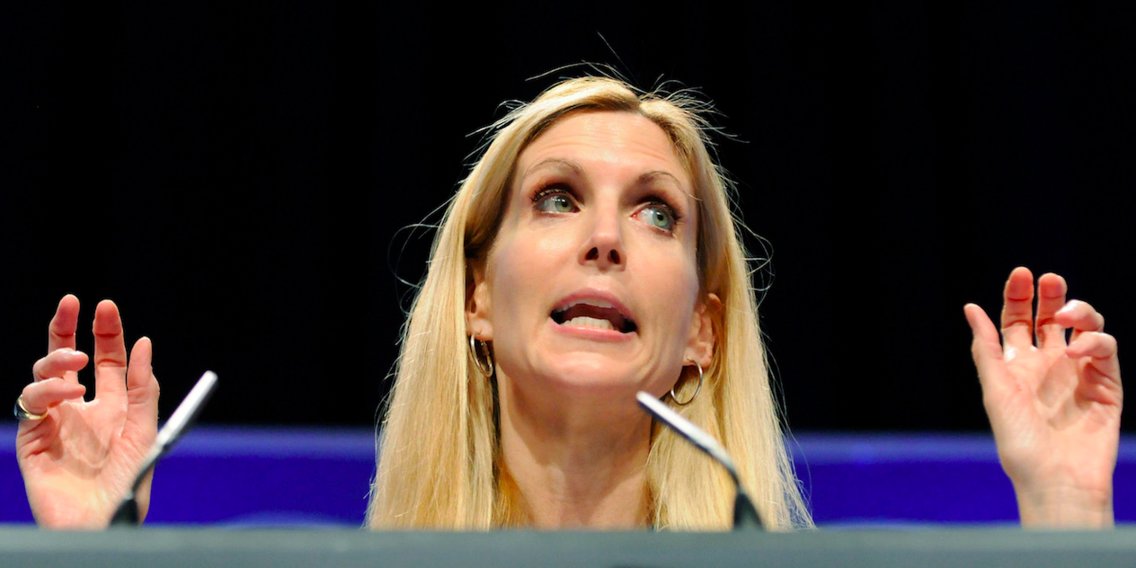 Ann Coulter has a message for President Donald Trump: "He's dead in the water if he does not build that wall. Dead, dead, dead."

Several days before the partial government shutdown began on December 22, the right-wing columnist and commentator appeared on The Daily Caller's podcast, where she slammed Trump.

"Trump will just have been a joke presidency who scammed the American people, amused the populists for a while, but he will have no legacy whatsoever," she said.

At the time, Trump signaled that he would sign a stopgap measure to keep the government funded until February 8, without $ 5.7 billion in funding for his proposed border wall.

Coulter and other conservative pundits like Rush Limbaugh were not pleased. Building a wall along the US-Mexico border was a key campaign promise.

Later in that December week, Trump made a face-to-face, saying he would not sign a bill that did not have funding for the wall. A bill with border wall funding could not be passed by the deadline, and on December 22 a partial government shutdown began.

Left-leaning commentators and a Republican lawmaker acclaimed Trump of caving to Coulter, et. al. "You have two talk-radio hosts who completely flipped the president," Republican Sen. Bob Corker told reporters. "So, do we fall under the tyranny of talk-radio hosts?"

Now, almost a month into a government shutdown over Trump's proposed wall, Coulter is leaning in on presiting the president.

In an interview with Vice News, which appeared on Tuesday, Coulter shared her frustration with the president, but also said, "as long as he does the fight for immigration, he will win."

Coulter lashed out at Democrats for not funding the wall while "weeping" over the 800,000 federal government employees who are either furloughed without pay or working without pay ̵

1; and who may have missed their first paycheck last Friday – saying government workers get better benefits and pensions than most people.

"Oh, gosh, they'll have to wait a few months before they know that they're going to be paid in full," she said. "Look, I'm not in favor of this, but previous shutdowns have been much more difficult."

The shutdown is not just affecting federal employees: the economy is suffering, airport security and wait times have been impacted, already backlogged immigration courts have stagnated, and national parks are falling into disrepair.

Still, Coulter told Vice News, the wall is all.

"More Americans die from drug overdose every year than they died in the course of the Vietnam War, and the vast majority of these drugs are brought in because we have a wide-open border," she continued. "What more about that I like about the Yosemite gift shop being open."

This line – a variation used by Trump during his primetime Oval Office address last week – has been fact checked. The overdose death toll figure on its own is accurate.

"According to preliminary data from the Centers for Disease Control and Prevention, more than 72,000 people in the US are predicted to have died from drug overdoses in 2017 – nearly 200 a day," Vox reported. Vox continued: "As with 2016, the 2017 death toll is higher than all US military casualties in Vietnam and Iraq wars combined."

However, according to The Washington Post, the Drug Enforcement Administration says that most drugs come through legal ports of entry, not at unsupervised areas of the border, so a wall would not necessarily stop the flow. Potent opioids like Fentanyl, and synthetic opioid that is 50 times more potent than heroin, can also be ordered online from places like China.

Coulter, who was originally all-in on Trump (writing a 2016 book called "Trump We Trust"), has also expressed his dismay over his presidency. Their relationship may have been somewhat shaken (after recent criticism, the president unfollowed her on Twitter), although Coulter claims in the interview that Trump still keeps her ear for her.

Trump "reads my stuff," she claimed.