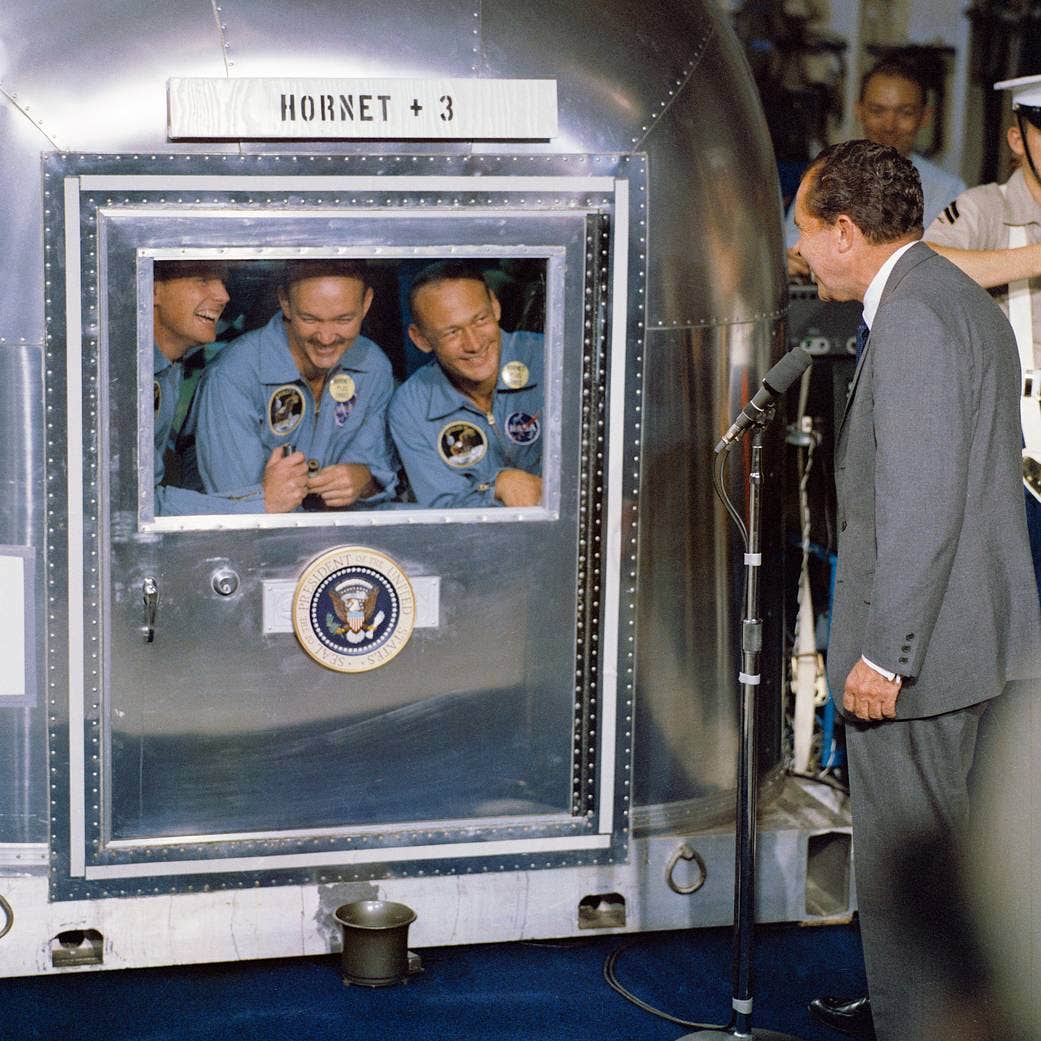 The world rejoiced when Apollo 11 astronauts Neil Armstrong, Buzz Aldrin and Michael Collins safely splashed down in the Pacific Ocean on July 24, 1969, after their incredible journey to the Moon.

By Armstrong, Aldrin and Collins, however, the three astronauts were given a hero's welcome by President Richard Nixon, who had been anxiously awaiting their return on board the aircraft carrier. , their return from the Moon still represented the step into the unknown

APOLLO 11: 50 YEARS ON THE WORLD CELEBRATES THE MOON LANDING

Scientists were concerned that the crewmembers may have brought pathogens back from the Moon with them, so they immediately entered a Mobile Quarantine Facility (MQF), and converted the Airstream trailer that was waiting for them on the USS Hornet

An interior view of the Mobile Quarantine Facility shows the Apollo 11 crew after their arrival at Ellington Air Force Base. Mission Commander Neil Armstrong is strumming on a ukulele while Michael Collins (right foreground) and Buzz Aldrin (right background) are looking out the window. The other people in the picture are MQF support staff.
(NASA)

The MQF containing the astronauts was lifted off the USS Hornet when it reached Pearl Harbor and then transferred to Hickam Air Force Base, where it was loaded onto an Air Force C-141 jet transport and flown to Ellington Air Force Base in Houston. From there, the astronauts were taken to the more spacious confines of the Lunar Receiving Laboratory at Johnson Space Center.

In addition to NASA staff, the astronauts also had a large group of rodent room mates at the Lunar Receiving Laboratory, who were closely monitored for signs of any germs brought back from the Moon

"We had a huge colony of white mice," Collins told Fox News. "The three of us had gone to the Moon – that was either national, international, triumph, or it was a total disaster depending on the health of the white mice we had."

"If the mice lived, everything was fine," he added.

After traveling hundreds of thousands of miles to and from Moon, the trio of astronauts were now going nowhere, for a while

"Although all three astronauts were veterans of previous missions, none had ever spent so much time in space and post-mission activities have never been conducted under strict confinement, "notes NASA's history office. "So the quarantine became oppressive, the more so because only the meager provision was made for recreation. An exercise room was available as well as a Ping-Pong table, and they could read or watch TV or talk to their families, but it was not like being at home. "

The MQF carrying the Apollo 11 crew is being transported to Hickam Air Force Base in Hawaii.
(NASA / Marshall Spaceflight Center / National Archives and Records Administration)

Less than a week after their return from space, NASA asked the astronauts how their time in the receiving laboratory was going. Armstrong's "noncommittal" response was that, so far, it had been going "as well as you can expect." Collins, understandably, said, "I want out," according to the space agency's history office.

Fortunately, the colony of mice did not show any ill effects and the astronauts were finally released from the quarantine on Aug. 10, 1969.

Half a century later, Collins, now a sprightly 88-year-

The MQF with the three Apollo 11 astronauts is unloaded from a U.S. Air Force C-141 jet transport at Ellington Air Force Base. (NASA)

The astronaut's choice of reading matter in the quarantine was particularly apt. "At the time, I was reading a book by John Steinbeck – 'Of Mice and Men,'" he said, with a smile

Collins spoke to Fox News in New York on Sunday after taking part in "One Giant Leap , "An event organized by the New York Times to commemorate the Moon landing.

July 20, 2019, marked the 50th anniversary of Moon landing when Armstrong and Aldrin became the first humans to set foot on the lunar surface. While his crewmates were exploring the Moon, Collins was piloting the Columbia Command Module, which was orbitning 60 miles above them.

The MQF used by the Apollo 11 astronauts is now in the collection of the Smithsonian National Air and Space Museum. 19659003] Follow James Rogers on Twitter @jamesjrogers