Apple One packages are now available in the United States and more than 100 other countries, allowing customers to subscribe to a variety of Apple services through a single plan, including Apple Music, Apple TV +, Apple Arcade, iCloud and more. 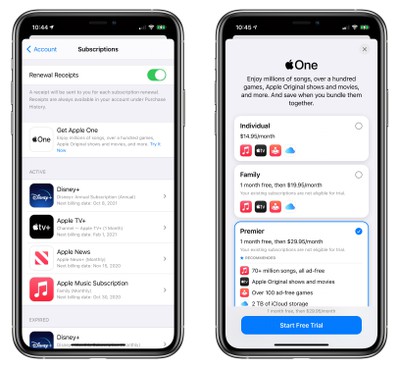 To sign up for Apple One on iPhone, tap Apps Settings> Your Name> Subscriptions. The Apple One prompt is still running for all users, so keep checking to see it right away.

Overview of the three levels of Apple One:

At launch, the Premier level is limited to the United States, Australia, Canada and the United Kingdom, as these are the only countries where Apple News + is currently available. And while the premiere level includes Apple’s new Fitness + service, which will offer workout videos and more, the service won’t be launched until later this year.

Apple One includes a 30-day free trial for all Apple services that customers don’t yet have. Once subscribed, customers can use the services included in their package on any platform where the services are available, such as iPhone, iPad, Apple TV, Mac and more.

To save even more, customers in the United States can pay for their Apple One subscription plan with an Apple Card to receive 3% of their daily money.