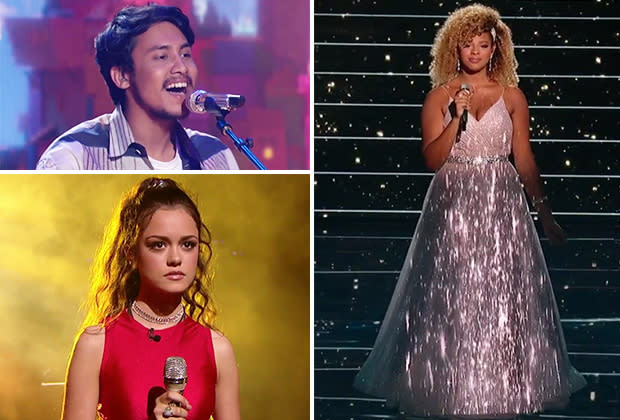 The sweet sounds of synergy filled American idol studio on Sunday, as the Top 9 (plus one!) for this season performed classic recordings from the Disney songbook.

But first, a returning finalist from last season was given a good time to wish for a star, as Ryan Seacrest revealed that America had voted Arthur Gunn (also known as last season̵

7;s runner-up) back in the game. And that’s exactly how we returned to the Top 10.

Before we split this week’s performances, let’s go straight to the results. After the two-hour broadcast on Sunday, the following three finalists were eliminated from the competition: Deschaun Goncalves, Alice Rai (!!!) and Cassandra Coleman (also !!!). That leaves Chayce Beckham, Casey Bishop, Willie Spence, Hunter Metts, Caleb Kennedy, Grace Kinstler and Arthur Gunn as our Top 7.

Read about our breakdown of Sunday performances, with the official video added when it becomes available:

KALEB KENNEDY, 16 | First, I’m surprised by the zero percent that this walking bottle of Nyquil chose to perform a song by Cars. He was relieved that he didn’t make “Life is a Highway.” To his credit, Kennedy seemed to bring an ounce more excitement to this performance than he had in previous songs (I’ll admit the dust), but it was still the same old routine that gave us every week. Katy Perry once again tried to draw more energy from him (“Every time you hire us, we bend!”), But expectations are so low, Lionel Richie applauded him that “he actually smiled at us.” Click here to watch.

WILLY SPENS, 21 | Shaking a new “do”, this beautiful soul supported the show with a joyful arrangement Lion Kingis the “Circle of Life”. It hadn’t dropped as much as some of Spence’s previous performances, but the last-minute key change and the strong final note ensured that we would remember it for hours to come. Luke Brian, saying “You just made me feel alive in your circle of life,” also won the award for the strangest comment of the night. I watch:

DESHAWN GONCALVES, 20 | After consulting with Stamos in the bathroom, Goncalves decided to try something a little different this week, playing a jazz spin on “When You Want a Star” by Pinocchio. There was something a little awkward in this open segment, but once the song settled into its casual groove, Goncalves was very much in his element. The notes weren’t always there, and at times it felt like a full show in the courtroom, but the judges absolutely ate it. Click here to watch.

CASEY BISHOP, 16 | When I saw Bishop perform “When She Loved Me,” my expectations immediately went through the roof and I was not disappointed. Not only did she perform chilling vocals, but she was also the first finalist of the evening to tell the full story of the scene. More vulnerable (but no less exciting) than some of Bishop’s previous performances, this one Toy History 2 the ballad also demonstrates new emotional pockets in his voice. The whole experience was like sailing in a cloud, unlike the wallpaper on Andy’s bedroom. I watch:

CHEIS BECKHAM, 24 | I was practically raised Dumbo (you know, minus this scene), so I’m always worried when someone performs “Baby Mine” on this show. And by that I mean I’m worried about how much I’m going to cry. (Perry’s cover took me last year, even with that ridiculous costume.) Anyway, Beckham’s’ 90s alt-rock for the most depressing lullaby in the world was perfectly adequate, though it didn’t bring tears. which I expected. I guess I also agree with Brian that it was “great for the ears.” Click here to watch.

ALYSSA WRAY, 19 | The vocals, the dress, the vibration – all about this performance of Cinderella“A dream is a desire that your heart makes” received a great yes from me. Idol loves to update classic songs, so I appreciated that Wray stayed true to the period with this one. I felt like a real Disney twist, more than most other shows at night. And it all started as a wonderful look at a beloved princess, a ballad turned into a bombastic display of Wray’s amazing trumpets. Just great. I watch:

ARTER GUN, 23 | After welcoming us to the basement of “Kiss the Girl” on a Disney night last season, Gunn got a unique look at “Remember Me” from Coco – a movie to watch right away, and you, if you haven’t already. At first I was against the idea of ​​bringing someone back from last season, but I sang a different tune after that absolute pleasure of returning. Gunn belongs to on this stage. Honestly, I’m just surprised he didn’t try to convince the judges that “Have You Ever Seen the Rain” is a secret Disney song. Click here to watch.

KASANDRA KOLEMAN, 24 | I feel that we rarely hear such a song Hercules“Go the Distance” performed by a female vocalist, even less a real tree nymph, so it was really delightful. As he sometimes does, Coleman took a minute to find her, but once he arrived on this bridge, she absolutely took off. Confident, powerful and completely in her element, Coleman built to a powerful ending, worthy of a hero. I watch:

MEN FOR HUNTER, 22 | Fresh emotional lyrical flood, the Mets returned to the stage with renewed confidence. Its soft, sweet take Tarzan“You’ll be in my heart” was beautiful, gradually growing into something really impressive. I wasn’t sure how I felt about the Mets after last week’s dramatic incident, but this show was a solid reminder of all it has to offer. Click here to watch.

GRACE KINSTLER, 20 | And then it happened. Idol usually keeps it for the last time, but even I was unprepared for this melting of the face of “Into the Unknown” by Frozen II. Equal parts Idina Menzel and Panic! At the disco, Kinstler blew up the roof of the studio, giving us the biggest moment of the night. And after this the next the biggest moment. Then another. I watch:

Your thoughts on this week’s performances and (somewhat shocking) eliminations? Post them in the comments below.

The best of TVLine