Beijing on high alert ahead of October 1 national celebration 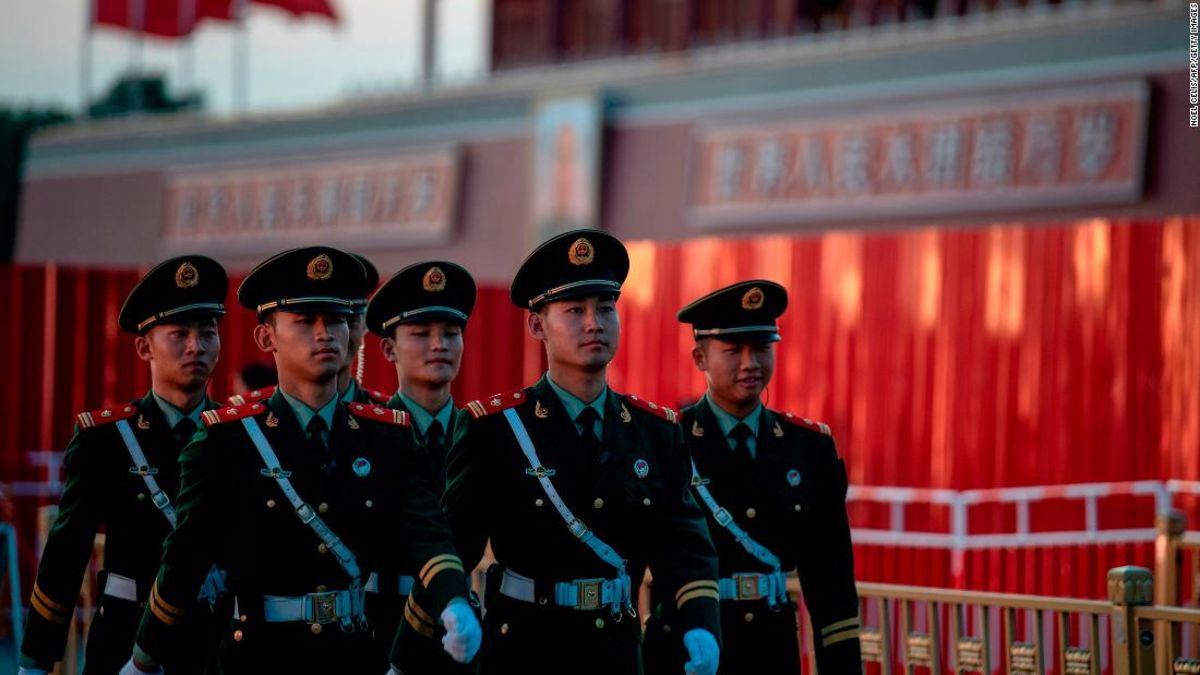 Beijing (CNN) – Every week for the past month, residents of Chaoyang District in Beijing have their streets shut down by uniformed men and bizarre vehicles.

14, security men dressed in black told them that floats for the upcoming October 1 parade were coming through.

One week later, they scraped to even get into their building compound. This time there were large, tank-shaped objects hidden under green military blankets.

Many of those in the community were understanding, even a little bit amused.

"It is for the 70th anniversary," said a retired local surnamed Liang. "We feel happy our country is 70 years old. … We will keep the weapons a secret."

A sign celebrating the 70th anniversary of People's Republic of China on a wall next to Tiananmen Square.

The inconvenience and heightened security come in the lead-up to the 70th anniversary of the founding of the People's Republic of China on October 1, an important moment for the ruling Communist Party and Chinese President Xi Jinping.

To celebrate, the Chinese government is holding a massive military parade through the center of Beijing – about 15,000 personnel, more than 160 aircraft and 580 pieces of weapons and equipment will take part.

Authorities have been working overtime to make sure nothing goes wrong ahead of the parade or during, and it is not just locally affected.

Even tourists could see that Beijing is preparing for a major event.

All along Central Chang'an Avenue, in both directions, black clad security guards with red arm bands stood every few feet for miles.

Chinese police block off a street corner at the front of a military truck next to Tiananmen Square ahead of an overnight rehearsal on September 7 .

On Friday, crowds of domestic Chinese tourists were scrambling to get into Tiananmen Square, where entrances and roads were blocked in random places by police and security barriers.

One visitor was an overheard complaining that if the government was going to impose such strict measures ahead of the event, they should issue a national warning to travelers.

But a Beijing mother who'd brought her daughter down to the square said that they we re happy to just come back another day if they couldn't get in.

"I brought my daughter down here just to feel the atmosphere ahead of the 70th anniversary," said the woman, who was declined to be named for speaking to foreign media during a politically sensitive time.

Even Pinto, visiting from Shanghai, said that he was not concerned, and it was nice to have fewer people on the street while he was in Beijing.

"We were expecting many more crowds but so far it's very good … we're fine with it, "he said.

During rehearsals leading up to the major event on October 1, hotels near Tiananmen Square reportedly sent notices to guests informing them they would be unable to leave the property for several hours each day.

But restrictions have become worse draconian in the lead-up to the event. On September 15, the Beijing Municipal Government announced that all civilian flying objects would be banned until after the celebration.

A Chinese woman holds a national flag near a large screen set up for the 70th National Day celebrations as they visit Tiananmen Square on September 27. “/>

A Chinese woman holding a national flag near a large screen set for the 70th National Day celebrations as they visit Tiananmen Square on September 27.

From the night before the parade, the majority of central Beijing will be out of bounds as preparations get underway.

On October 1, Beijing's Subway Line 1, which travels east-west through the city and passes Tiananmen Square, will be reportedly stop running for the whole day.

Meanwhile, Beijing's normally-restricted Internet has become even more difficult to navigate for users trying to access sites outside China's Great Firewall in the lead-up to the anniversary.