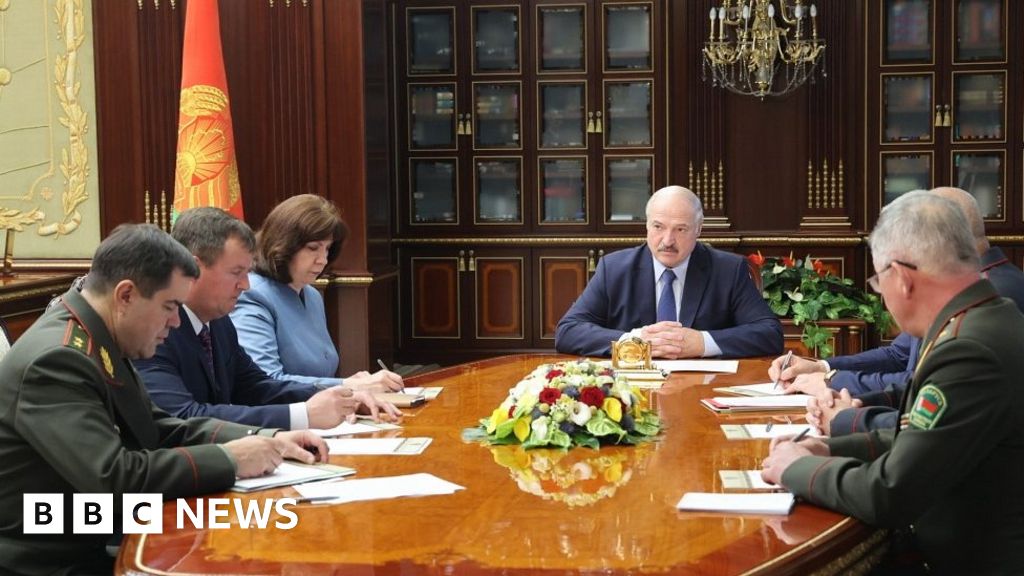 ; ahead of the country’s August 9th presidential election.

Russia is seeking clarification on the arrests, a Kremlin spokesman said.

Dmitry Peskov said he knew nothing about a conspiracy or a Wagner paramilitary group that Belarus suspected of involvement.

President Alexander Lukashenko has been in power since 1994 and is seeking a sixth term.

He exercises authoritarian control over Belarus in a Soviet-era style and faces a wave of opposition protests over his re-election candidacy.

After the collapse of the Soviet Union in 1991, Russia maintained close ties with Belarus and they conducted joint military exercises.

The Investigative Committee (SC), which is investigating the case, says it is investigating possible links between the suspects in Russia and the wife of opposition presidential candidate Svetlana Tsikhanouskaya.

Syarhei Tsikhanuski, a popular opposition blogger, has been accused of trying to stir up mass unrest while in prison. He also faces other charges.

Mr Statkevich, a veteran opposition activist, is also in prison.

Andrei Raukov said 14 of the detained Russians had fought in the Donbas conflict in Ukraine, describing their presence in Belarus as a “very unpleasant situation”.

Reports from UN investigators, the US military and journalists have documented Wagner’s group operations in Ukraine, Syria, Libya, Sudan and the Central African Republic. The Russian government denies any ties to the group.

The Belarusian state news agency Belta named all 33 Russian suspects and gave their dates of birth.

Meanwhile, Ukraine’s SBU security service said it plans to seek the extradition of Russians so they can be prosecuted for alleged crimes in eastern Ukraine.

Russia is under international sanctions for its military involvement in Ukraine, although the Kremlin denies arming pro-Russian separatists in Donbas.

The state television channel Belarus 1 showed that the Russians had been arrested by the Belarusian KGB in a sanatorium. The video report (in Russian) states that the group has raised suspicions because of its disciplined military behavior – for example, they avoid alcohol.

A statement from SK said on Wednesday that authorities had “arrested 33 Russian citizens, members of PMC Wagner [private military company], staying in the sanatorium “Belarusochka” in the Minsk region.

Videos of the group’s arrest showed they had Sudanese currency and a Sudanese phone card. Wagner’s group is known to be operating in Sudan and there is speculation that it has used Belarus as a transit country for African operations.

In Moscow, Mr Peskov said on Thursday: “We know that 33 Russians were detained in Belarus yesterday. Two hundred people are still at large. We do not know of any illegal activity that could justify their detention.”

He also said that in Russia there is no such thing as “PM Wagner PMC”.

“There are already insinuations that some organizations from Russia are sending someone to destabilize the situation in Belarus. Or, of course, this is nothing but insinuations,” he said.