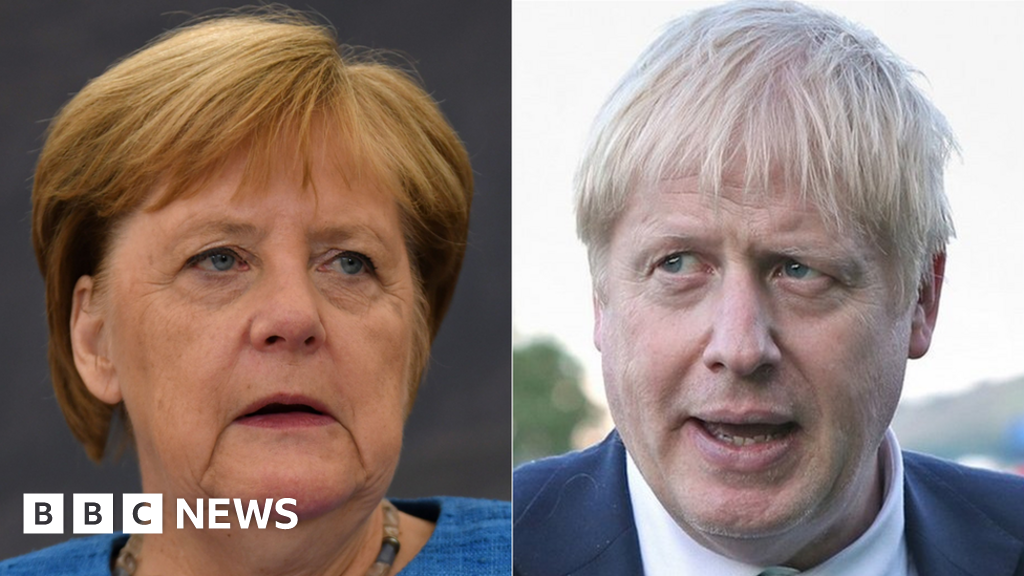 Boris Johnson will meet later with German Chancellor Angela Merkel in Berlin, where he is expected to repeat his call for a plan for the backstop to be rejected.

The Prime Minister said the Northern Ireland agreement on avoiding a hard border was "anti-democratic" and should be removed in order to strike a deal for Brexit.

But the EU rejected the possibility of any changes to the rear stop.

Mr Johnson said the EU's response to his requests was "a bit negative".

However, he said he would start talks about Brexit with "a lot of oomph" and there was "a real sense that something had to be done" with the backstage.

"We cannot pass it through Parliament as it is," he added.

The prime minister will also emphasize that although he wants a deal, if the EU does not want to negotiate, the UK will still leave at the end of October.

Speaking before the meeting, Ms Merkel said that a solution could be found on the issue of the Irish border, which meant that a return stop would not be necessary – but indicated that there would be no change in the withdrawal agreement.

Mr Johnson's meeting with the German Chancellor is the first in a series of talks with EU leaders.

On Thursday, Mr Johnson will travel to Paris to meet with French President Emmanuel Macron, and on Saturday he will attend the G7 summit with other world leaders, including US President Donald Trump.

In a letter to European Council President Donald Tusk on Monday, Mr Johnson said that the back stop – which is part of a withdrawal agreement negotiated by former Prime Minister Theresa May – risks undermining the peace process in Northern Ireland.

The deal was rejected three times by Parliament and Mr Johnson claimed it would not be adopted by lawmakers unless the backstop was removed.

The Irish border is a matter of great political, security and diplomatic sensitivity and the UK and EU agree that whatever happens after Brexit, there must be no new physical checks or infrastructure at the border.

The rear stop is a last resort position to ensure that, if implemented, it can be seen that Northern Ireland will remain in compliance with certain rules in the EU single market.

It will also include a temporary single customs territory which effectively holds the whole of the United Kingdom in the EU Customs Union.

European Council President Donald Tusk says those who oppose a stopover without "realistic alternatives" supports the restoration of a hard border.

The European Commission stated that Mr Johnson's letter did not contain a "legal operational solution" to the Irish border issue.

Meanwhile, the government has announced that British officials will only stop attending most EU meetings from 1 September if they attend those where the United Kingdom has a" significant national interest ".

said it would "remove" them from discussions "on the future of the Union after Britain leaves" and allow them to focus on "our immediate national priorities".

But SNP's Fiona Hislop expressed concern that the move could leave Scotland and the UK unrepresented while he is still an EU member.

The government is also intensifying its preparations for a no-deal deal by announcing that it will automatically register British companies in the customs system to allow them to continue trading with the EU after Brexit.

Labor calls on ministers to put business and the economy first and to exclude Brexit without a deal.

Treasury Secretary-General Peter Dowd said the "panicked message" was "late in the day" for businesses and would not come close to mitigating the damaging effects that Tory Brexit would have on the exporters of the deal. small business ".