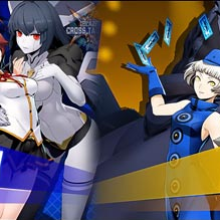 Toru Adachi and Elizabeth Hail from Persona 4 Arena, Celica A Mercury and Susanoo come from BlazBlue Centralfiction and Hilda is from Under Night In-Birth.

Selika seems to use a puppet of some kind while fighting. The name of this machine is Minerva.

Like other characters in Persona 4 Arena, Toru Adachi and Elizabeth fight alongside their Staff.

Hilda's play style has a serious emphasis on zoning opponents. During her trailer phase, she was never shown to hit an enemy with a melee attack.

Susanoo is known as the God of Destruction.