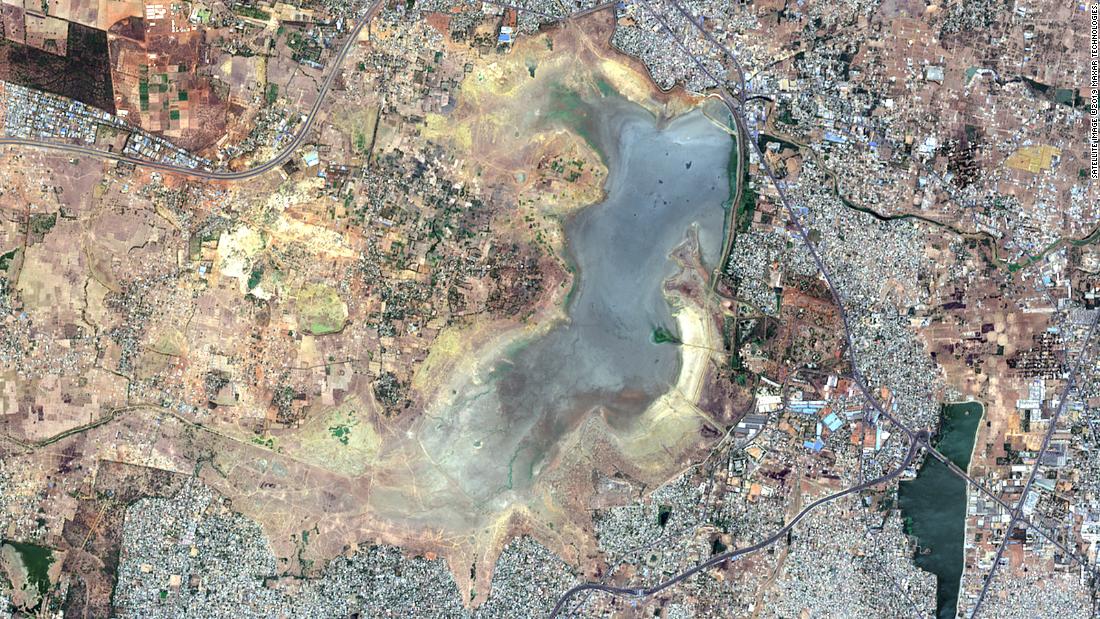 Chennai's water supply comes from four reservoirs, all of which are almost completely dry because the monsoon rain that replenishes them has not come on time. Satellite imagery makes it very clear how low their reservoirs are.

Lake Puzhal, the city's largest, is the large body of water in the satellite image from Maxar below. On June 15, 2018, it was full of blue water.

One year later, the reservoir was reduced to an almost completely dry lake bed.

Aerial video from a passenger plane shows the dusty lake bed now. Srini Swaminathan took the video of Lake Puzhal as he left Chennai on a flight.

"I intentionally paid for and chose a window seat to see the drought situation of my city from above," he told CNN.

Comparing more satellite imagery from Maxar shows just how much water has dropped in the last two months. The video and images above show that there's barely any water in Lake Puzhal.

The same is true further south in the smaller reservoir of Lake Chembarambakkam.

With the reservoirs dwindling, Chennai residents are forced to find water.

From the February to June of this year, more and more of the lake bed turned into dust. Richer residents and businesses have water trucked in from nearby provinces.

Anyone who can not afford these deliveries is forced to find and wait with buckets for their allocated amount from state water trucks. rain is a blessing for Chennai residents, and they got a little shower on Thursday – roughly 1.14 inches of rainfall.

While it is not enough to alleviate the water crisis, it is a hopeful sign that the monsoon rain is beginning.