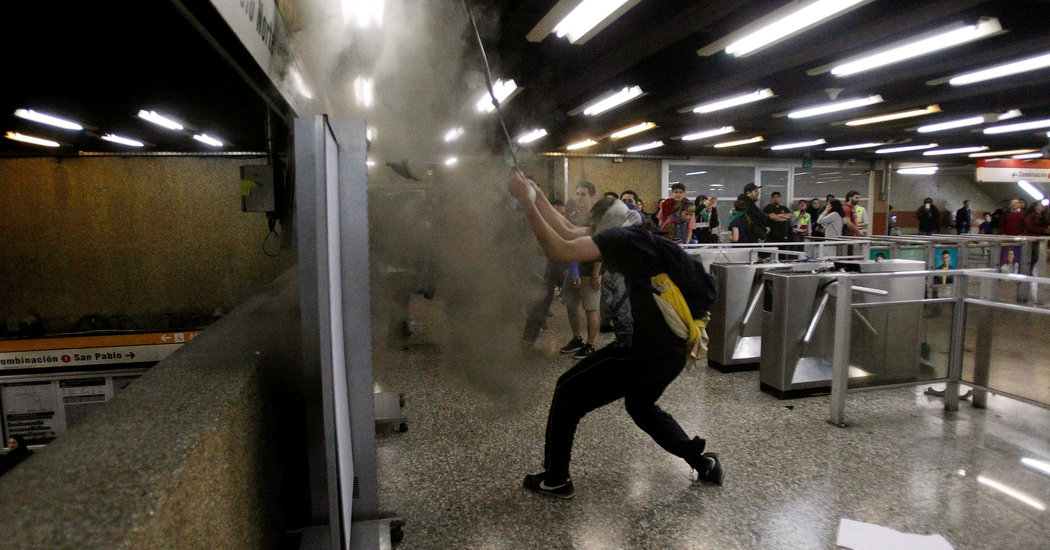 SANTIAGO, Chile – Chilean President Sebastian Pinera has declared a state of emergency in the capital after protests against public transport marches on Friday night turned into robberies and arson aimed at metro stations, banks and buses.

The demonstrations began earlier this week as a campaign by high school students who jumped underground turnstiles to protest the second tariff increase this year. But on Friday night, demonstrators set fire to a dozen subway stations, several banks, buses and the headquarters of the country's largest electricity provider, Enel.

One student was killed by police and another was injured by rubber bullets during demonstrations that shook one of Latin America's most prosperous and orderly capitals.

The state of emergency declared by Mr. Pinera imposes restrictions on the right of citizens to move and assemble freely, and this entitles the army to internal security. Speaking at the presidential palace around midnight, he said the measure was needed to restore order after the chaos caused by protesters, whom he called "criminals."

The sight of servicemen wandering the streets after Mr Pinera's announcement was concerning to many Chileans, given the country's 17-year military dictatorship during which violent human rights abuses were carried out by the armed forces. The president has appointed an army general to oversee security operations.

The tariff increase, which came into force on October 6, unleashed anger, comes at a time when the cost of living of poor and middle-class families is rising while wages remain stagnant.

"Everything that happens is so unfair because everything goes up: transportation rates, electricity, gas and wages are so low," says Isabel Mora, 82, an old pensioner who receives a monthly pension of about 62 dollars.

While declaring a state of emergency, Mr. Pignera stated that he would try to find ways to mitigate the increasing transportation costs. With the fare increase, subway rush hour travel now costs about $ 1.20.

The subway system stopped service for several lines and was forced to close the entire network at night. Hundreds, if not thousands, were left on the street. Unable to get on the crowded buses, many had to take hours to get home.

Government officials called the demonstrators "organized vandals" and "criminals" and announced that they would enforce an internal security law that gives the state the power to impose higher penalties for crimes.

Residents in the capital were knocking down dishes and pans all over town on Friday night. As people loot supermarkets and put up barricades, police seem to be withdrawing to their stations.