Cliffside Italian Cemetery and its coffins carried by a landslide 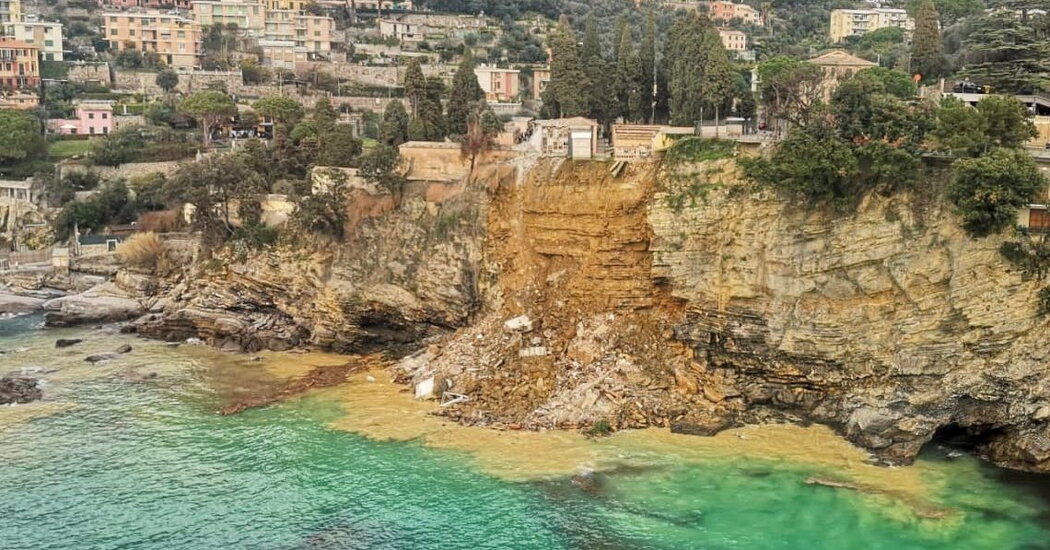 ROME – A landslide swept away a cemetery on the edge of a cliff in the northern Italian region of Liguria, scattering about 200 coffins and bodies over a hill and in the Mediterranean.

Divers managed to pull 12 coffins out of the sea by Wednesday after a landslide in the town of Camogli, about eight miles north of Portofino, two days earlier. Most of the coffins from the cemetery remained scattered around and under the rubble caused by the landslide.

Relatives of people buried in the cemetery gathered in the main square of the seaside town to get news and protest against the negligence of local authorities, according to them.

“It was the only place I could go to see my parents and talk to them,” said Clara Terile, 66, who owns a shoe store in Camogli, in a telephone interview Wednesday.

The landslide was probably caused by erosion of the rock beneath the cemetery, exacerbated by storms that have hit the fragile Ligurian coast in recent years, according to Italy’s National Council of Geologists.

“This event hit the community very emotionally,” said Francesco Olivari, the mayor of Kamogli. “The whole of Liguria is characterized by these phenomena, it was difficult to predict,” he said.

The landslide, which occurred off the coast of Genoa, where a bridge collapsed in 2018, killing 43 people, caused outrage in Italy for lack of infrastructure maintenance and prevention of natural disasters. Prosecutors in Genoa have launched an investigation into the collapse of the cemetery.

“This is Italy, even the dead can’t rest in peace,” one person complained on Twitter.

The landslide shows “the lack of support that we, geologists, have condemned for years,” Domenico Angelone, secretary of the National Council of Geologists, said in a statement. Despite their “high social, moral and cultural value”, cemeteries are often built in unstable places and have suffered a “lack of attention” in recent years, he added.

The town had begun work to strengthen the rock near the cemetery, and the area had been closed in recent days after officers noticed cracks and heard a squeak. Mr. Olivari, the mayor, said. Some locals protested that they had been reporting cracks and problems with the structure of the cemetery for years.

Lila Mariotti, a resident of Camoli, posted on Facebook a photo of cracks in the walls of the cemetery, which she said she sent the mayor in 2012. “I never received answers,” she wrote.

Ms Terrile said she wrote to City Hall in 2007, reporting cracks in the front of her father’s grave, but also received no response. In 2019, she reported more cracks and the mayor’s office repaired them, she said. A few weeks ago, while visiting the cemetery, she noticed that the same cracks had reappeared.

“I hope my parents are among the bodies they found,” she said, “I don’t even have a place to bring a flower anymore.”

Mr Olivari, the mayor, said the city had provided psychological support to the families affected.

The regional authorities have asked for help from the national rescue services, as the operation to search for the coffins and bodies depends on the safety of the rock, which has been at risk of further collapse.

For now, divers can only rescue coffins floating in the sea, as most of the others are buried under the rubble of the landslide, said Giacomo Giampedrone, the region’s top civil defense official.