Coca-Cola will sell Dasani in aluminum cans and bottles 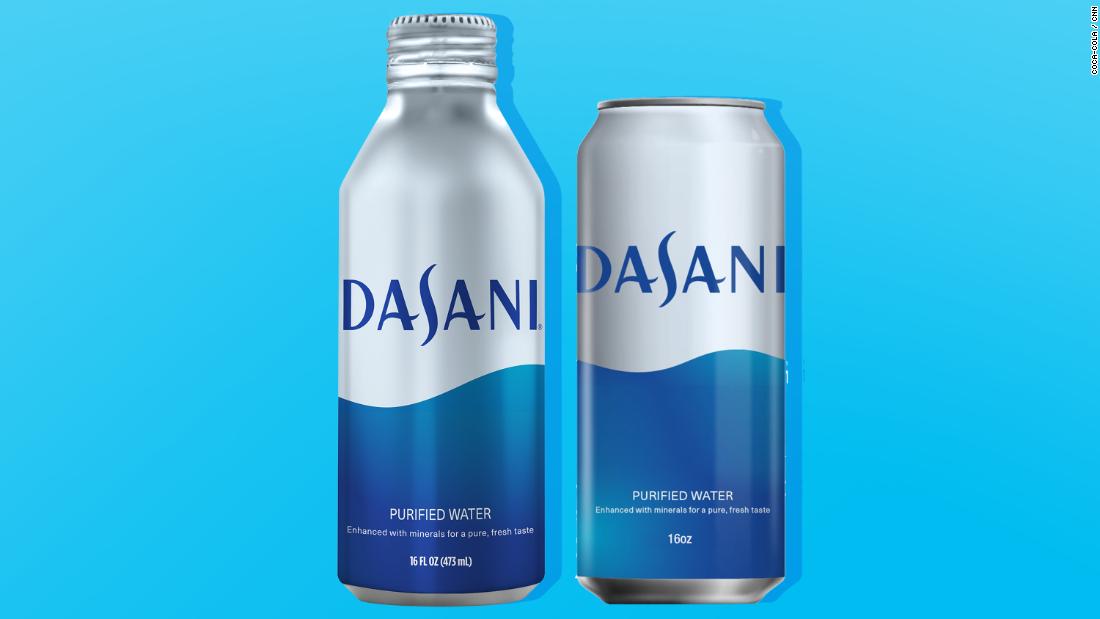 Coca-Cola ( KO ) will continue to sell Dasani in plastic bottles, but this will reduce the amount of plastic in these containers through a process called lightening. Coke also launches a new hybrid bottle made of up to 50% recycled plastic and plant-based renewable materials.
As consumers become concerned about plastic pollution, large companies promise to reduce packaging waste. Coca-Cola produced 3.3 million tonnes of plastic in 2017, according to a recent report from the Ellen MacArthur Foundation. And environmental activists have called for the company to contribute to the problem. A recent report published by Greenpeace called Coca-Cola the "most productive pollutant" in comparison to other top brands, since the largest number of global beach cleanups were the collection of Coca-Cola brands.

"We believe that all packaging materials have advantages and, if properly managed, can be turned into valuable resources for reuse," Coca-Cola says in response to the report. "We are ready to do our part."

Coca-Cola has promised to collect and recycle the equivalent of each bottle or sell it by 2030. It also commits to making its bottles and cans of at least 50% recycled material over the next 11 years. And recently, Coca-Cola said it has withdrawn from the Plastic Industry Association because the lobbying group has taken positions that "are not fully in line with our commitments and goals."

Changes at Dasani can help Coca-Cola achieve these goals and remove about 1 billion pristine plastic bottles made from non-recycled plastic from the supply chain over the next five years.

There will be some competition.

PepsiCo ( PEP ) has also announced that it will begin selling its brand of Aquafina water in aluminum cans in US fast food chains and restaurants next year. The company is also expanding its distribution to retail stores.

Using aluminum bottles and cans can help increase the number of Dasani products that are recyclable. Aluminum is easier to recycle than plastic, and How2Recycle labels should help clarify how packaging should be recycled.

The company also releases a new version of Dasani PureFill water dispensers that allows people to fill their own bottles or glasses with Dasani products, including flavored and sparkling water.

Environmentalists say the best way to eliminate waste is to reuse containers. But "the solution can't be one," said Bruce Caras, vice president of environmental and sustainability at Coca-Cola North America.

Coca-Cola's plan is "to create a future where the consumer has a variety of choices," which can reduce their environmental impact, he said. Releasing several types of products will help Coca-Cola learn about consumer behavior, he added.

"We really think about the future of this brand, which is different from the mandate for sustainability," said Lauren King, brand director for Dasani, who noted that Dasani is growing along with the trend of bottled water.

Packaged water sales have been steadily increasing over the last few years, according to a report published by the Mintel research brand in February. The sector is likely to continue to grow, Mintel said, as consumers discard sugary drinks for healthier options such as water and selfies.

But sales can be a hit if customers decide to fill their own tap bottles instead of buying water in plastic bottles to help protect the environment.

"Major brands of waters such as Dasani were under pressure," said Coca-Cola CEO James Quincy during a conversation with an analyst discussing the company's second-quarter earnings. "There is some challenge there," he said.

But Coca-Cola's premium water brand Smartwater is doing "really well," he said. This may be because it offers certain ingredients that people would not find in ordinary tap water, including added electrolytes or antioxidants.