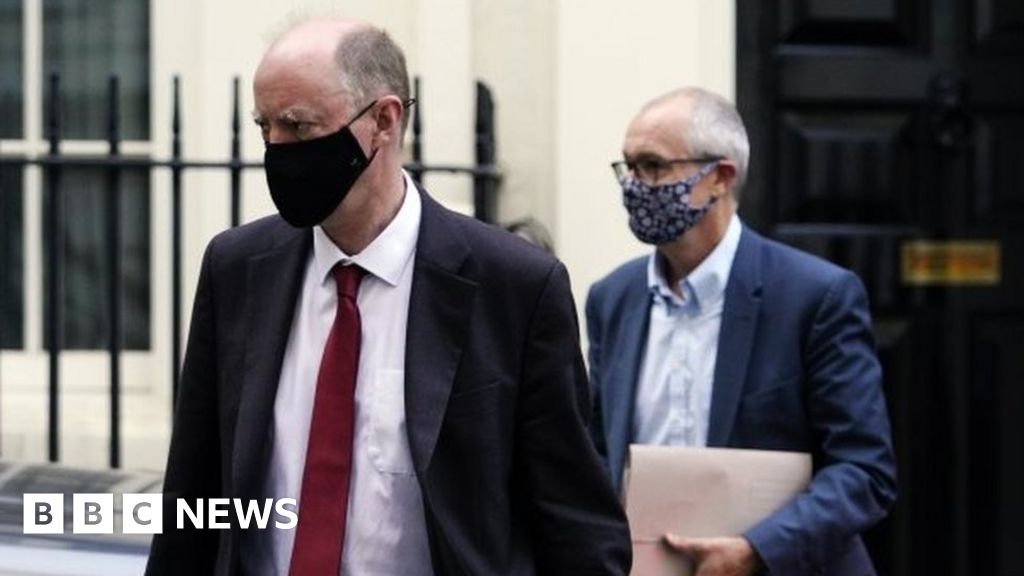 As the UK introduces new restrictions on social contacts to curb the spread of the coronavirus, controversy continues to rage over whether the government initially considered trying a completely different approach.

At the start of the pandemic, the government̵

7;s chief scientific adviser, Sir Patrick Valence, spoke of “herd immunity” – the idea that once a sufficient population has been exposed to the virus, they will build natural immunity against it.

Sir Patrick and the government insist that this has never been an official policy. The government also denies any delay in locking the country, as some critics have suggested.

Emails received from the BBC reveal concern among the government’s top scientific advisers in response to Sir Patrick’s remarks.

In an email in March, Sir Patrick asked for help to “reassure” academics who had expressed anger at his repeated mentions of herd immunity and delays in announcing the blockade.

The material received by the BBC at the request of the Freedom of Information Act consists of any email sent by Sir Patrick and the Chief Medical Officer for England, Professor Chris Whitty, from early February to early June, containing the words “herd immunity “.

No emails were reported until March 13, when Sir Patrick discussed herd immunity in a number of media interviews.

“Our goal,” he told BBC Radio 4 this morning, “is to try to reduce the peak – not to suppress it completely, also because most people get a mild illness, to build some degree of herd immunity.” while protecting the most vulnerable “.

To many, his words seemed an unequivocal endorsement of herd immunity. They also explained the government’s reluctance to order the blockade and social distancing measures already in place in many other countries, despite cases of growing and disturbing scenes in hospitals in Italy.

Speaking to Sky News the same day, Sir Patrick spoke of not suppressing the virus completely to avoid a “second peak” and also to “allow enough of us who will get a mild illness to become immune to it”. .

When asked how many of the British population will have to shrink the virus to make herd immunity effective, he calmly replied “probably about 60%”.

With approximately 1% mortality in the cases the interviewer answered, that would mean “an awful lot of people are dying.”

At the time, there was no strong evidence that coronavirus infection would lead to long-term immunity.

The next day, a group of more than 500 scientists published a joint letter criticizing the lack of social restrictions on distancing imposed by the government, adding that “embarking on” herd immunity “at this time does not seem a viable option, as it put the NHS at an even higher level of stress, risking many more lives than necessary. ”

In an email to Sir Mark Walport, a former UK chief scientific adviser, discussing the scientists’ letter, Sir Patrick suggested the response was: “Herd immunity is not a strategy. The strategy is to smooth the curve … and protect adults. people … As we do this, we will see immunity grow in the community. ”

Sir Patrick seems clearly shocked by the reaction to the use of the phrase.

In response to an email titled “Covid-19 and Herd Immunity,” from an academic, he wrote rudely, “No, that’s NOT the plan.” However, he does not explain his previous references to herd immunity.

That same weekend, he wrote to a colleague, “Anything you can do to reassure our academic friends about herd immunity will be greatly appreciated.”

Sir Mark Walport told the BBC he believed the interviews were misunderstood.

He suggested that what Sir Patrick meant when he said that it was not desirable to completely suppress the virus was that it would be so “draconian and difficult to implement that it would not be achievable.”

However, others suggest, despite denials, that “herd immunity” was indeed a strategy for a period of time.

The first public use of the term by a British official appears to have been in a BBC interview on 11 March with Dr David Halpern, CEO of the National Behavioral Insight Team, known as the “push unit” and a member of the Scientific Advisory Group. for emergencies (Sage).

He told the BBC: “You will want to protect these risk groups so that they do not catch the disease and by the time they emerge from their cocoons, herd immunity has been achieved in the rest of the population.”

However, emails received from the BBC confirm that the herd’s immunity was discussed as early as January.

In an April email, Prof. Whitty met with colleagues for a report in the Times, in which an unnamed senior politician said he had interviewed Prof. Whitty in January that “they were absolutely focused on herd immunity.”

In the email, Prof. Whitty complains that he has been misrepresented, saying he never thought the herd’s immunity “is actually a sensible policy goal”, but suggests that the concept was talked about when answering “questions, assigned to me by ministers. “

In another email to the president of the Faculty of Public Health, who sets standards for health professionals – who had raised questions about the lack of tests – Prof. Whitty insisted that the government had never followed a “herd immunity strategy”.

In a statement, a government spokesman said the emails “clarify … herd immunity has never been a policy goal”.

However, this is unlikely to end the dispute, especially given the lack of references to herd immunity prior to Sir Patrick’s March 13 interviews.

Campaigns representing the families of some of those killed in the pandemic are calling for a public study of the government’s response to the disease.