COVID-19 unrest in Oregon, which worsens younger people and forces them to return to restrictions 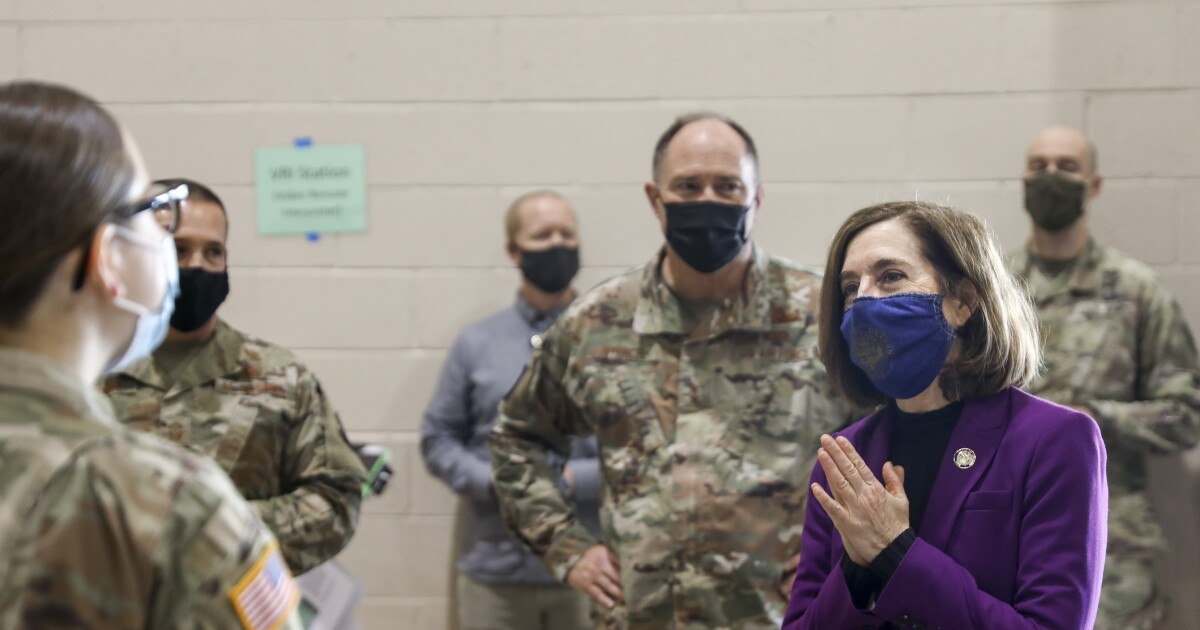 For months, Susanna Sbragia waited her turn to be vaccinated against COVID-19, while Oregon teachers, seniors and others with higher priority received theirs.

The 55-year-old financial director of the city was meticulous about wearing a mask and washing his hands during the pandemic. She worked from home and kept fit in daily walks and dance lessons on YouTube with her husband.

But a week before her shooting appointment on April 22, she felt exhausted and began to ache. A test confirmed COVID-19. She took a breath during an ambulance trip to Samaritan Lebanon Municipal Hospital, a 25-bed medical center in a former logging and logging town 80 miles south of Portland.

9 that hit Oregon, alarming officials who threw measures to open the state in the opposite direction. Doctors say the patients they meet are younger, sicker and often without basic medical conditions, suggesting that the powerful options may be partly to blame.

On Friday, Gov. Kate Brown placed 15 counties in the “extreme risk” category, banning indoor dining in restaurants and limiting the number of visitors to gyms. She said returning to restrictions could save hundreds of lives and prevent up to 450 hospitalizations over the next three weeks.

“What I can’t do is bring back someone’s life lost by this virus,” Brown told a news conference on Friday. “That is why, no matter how difficult it is, we must act immediately. This is really a competition between options and vaccines. “

It imposed restrictions after cases increased by 51% in two weeks, the fastest growth in the country and hospitalizations jumped by more than a third. As cases declined in much of the rest of the country, Oregon took the opposite direction.

The situation is far from terrible. The average number of daily cases in the country last week was 19 per 100,000 people – half of what they were at the peak of the state at the end of last year and the middle class at the national level. In Michigan, where a record number of children are hospitalized, the average daily number of cases is 45 per 100,000.

But the worry is that the situation in Oregon could develop rapidly.

Officials were particularly concerned that more than 300 people remained hospitalized with COVID-19 in a country with relatively few reservation beds.

The reasons for the jump in Oregon – a state that has the third lowest cumulative case rate in the country and the fourth lowest mortality rate – are something mysterious. Experts are trying to determine which factors are unique to the state.

Option B.1.1.7, first identified in the United Kingdom, accounts for more than half of Oregon’s recent cases. Hearing the circumstances of Sbragia’s infection, Chunhui Chi, director of the Center for Global Health at Oregon State University, said in an interview that she may have this option, given its highly contagious nature.

But he noted that B.1.1.7 is widespread as the coronavirus spreads around the world. Instead, he said, seeds from the Oregon wool may have been sown months ago, when the state slowly began vaccinations.

“I suspect that may have contributed,” he said. “We are looking at a number of factors contributing to this leap, including options and people releasing their guards due to pandemic fatigue and a sense of security or hope from vaccinations.”

In another anomaly, which Chi said could be partly to blame, in January Brown moved schoolteachers to citizens aged 65 and over for vaccines. She said she had moved to the rapid opening of schools, but critics saw it as proof of her loyalty to the teachers’ union.

Dr. Dean Sidlinger, a state epidemiologist in Oregon, said Brown’s limited success could help explain the jump. Keeping the number of cases low left the larger population without natural immunity to conclude with COVID-19, he said.

“The success we have had in preventing disease and serious illness means we have to make up for it in vaccination, and it takes time,” he said.

But Chi and Dr. Katie Scharf, an infectious disease specialist at Kaiser Permanente in Portland, were skeptical. “I think that’s a small part of the reason cases are on the rise in Oregon,” Scharf said.

She pointed out that the Upper Midwest, including Michigan and Minnesota, had previous waves and yet they see another significant wave. Vermont, Maine and Hawaii had low levels of infection during the pandemic, and yet their incidence continues to decline, she said.

Scharf noted that frail older people remained largely healthy during the current Oregon high tide, indicating that the vaccines were effective. “Unfortunately, there is a small part of the population who either did not have access to the vaccine or chose not to be vaccinated, and that is what we see in our hospitals,” she said.

She believes the jump stems in part from the authorities removing some restrictions too quickly. Allowing wrestling and other indoor sports with young people is premature, she said.

But business owners are pushing for a reopening, and Oregon Restaurant & Lodging Assn. opposes Brown’s new restrictions. “It’s an incredible failure for thousands of businesses in our industry,” said Jason Brand, president of the association and CEO.

Lebanon, a city of 17,000 at the foot of the Cascade Range, was the site of some of the first coronavirus infections in Oregon last March, a week before Brown issued a state order to stay home. The disease killed eight residents of long-term care veterans near the hospital.

The hospital, which serves a population with a high rate of diabetes, lung disease, drug abuse and mental health, admitted its first patient with COVID-19 on June 18th. Initially, staff members felt they could offer nothing but oxygen and supportive care, said Dr. Bill Barish, the hospital’s medical director.

“We’re used to doing things and helping people, not just watching them go around the sewers,” he said.

But staff were resourceful, Barish said, describing a team of five people who went to the intensive care unit at the start of the pandemic to pump air into the lungs of a 60-year-old COVID-19 patient who had been intubated. “It was like trying to aerate concrete,” said Barish, who monitored the man’s oxygen levels shortly after telling his family he was recovering.

Schyler Sprague, a young respiratory therapist, ran to his office and returned with a PEEP, a valve that increased airway pressure in the lungs.

“She saved his life,” he said.

The hospital’s highest admission for COVID-19 came in the summer, with five or six inpatients at once, a few months before the peak number of state cases. The intake is comparable during the current tide.

Sbragia, who was released from the hospital on Friday, falls into the age group between 50 and 64, which has seen the biggest increase in hospitalizations across the country during the wave.

“You are seeing a reduction in the impact on the elderly,” because many of them have been vaccinated, Sidlinger said. “But we are also seeing an increase in the youngest adults, in the 18-34 age group.”

In Portland, for example, a healthy 30-year-old woman was admitted to hospital this week with severe COVID-19 after being infected by her child.

In downtown Oregon, Bend, St. Charles Medical Center has exceeded 90% of its capacity at high tide. But Blue Mountain Hospital in Grant County, which had the third-largest case in the country this week, is not busy as people manage to recover at home.

Oregon has little room for error because it is the state with the fewest hospital beds per capita. In good times, the ratio is considered a plus, which shows efficient use of resources.

The race is now running across the country to vaccinate as many people as possible, hoping the current tide will be the last. But the drive has met with resistance, especially in rural areas, and the counties with the lowest levels of vaccination have the least demand for vaccines.

At a hospital in Lebanon, doctors and administrators are advocating for vaccines. But not all employees are interested. Two housekeepers who clean and disinfect the rooms where patients with COVID-19 are treated have said they have no plans to take pictures.

“I see people getting sick after vaccination,” said Barbara Strasman.

“I feel like we were born so healthy that there’s no reason to put things in our bodies like that,” said Heather Atterberry.