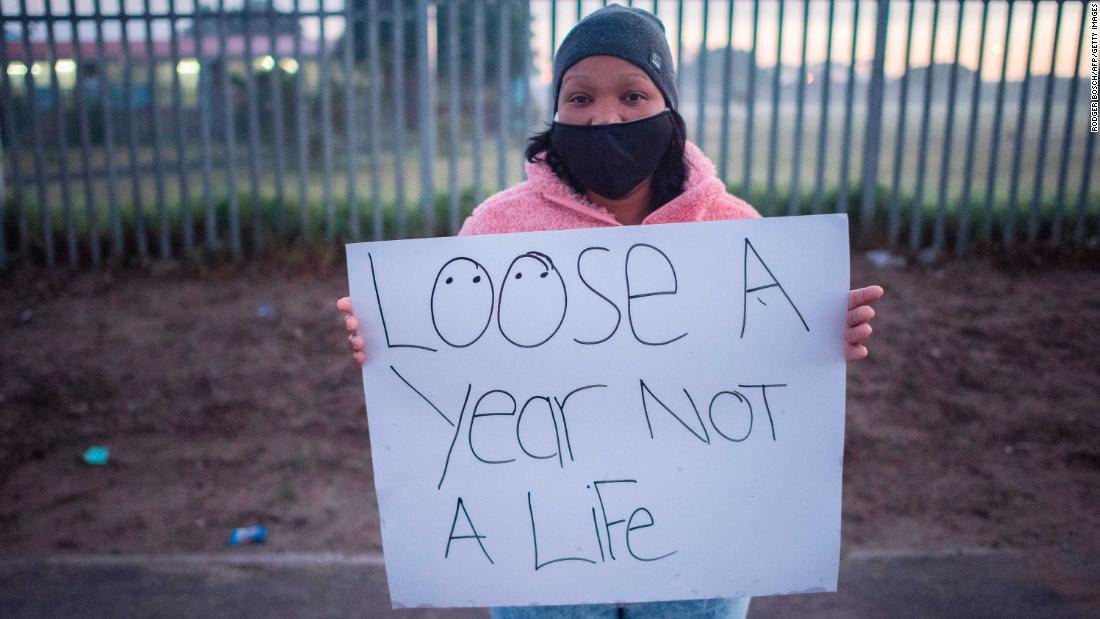 Malawi last closed schools when President Lazar Chakvera announced they would be closed for three weeks after a sharp rise in numbers.

The country has not reported any cases for more than two months, but they have now jumped, and a third of a total of 353 deaths have occurred in the past two weeks, according to data from John Hopkins University.

“The time has come to impose these things on the common good,” Chakvara said in a televised address on Sunday. However, boarding school students will remain on campus until health authorities determine whether it is safe to return home.
Government officials have died from the virus, including Malawi’s transport minister and another senior cabinet member who died last week.
Zimbabwe’s Foreign Minister Sibusiso Moyo died Wednesday after contracting the virus, as did South Africa’s presidency minister Jackson Mtembu on Thursday.

Chakvera said he had ordered an increase in the number of test sites and had hired additional medical staff, noting that facilities in the country were terribly underused. The president said he had ordered the finance minister to allocate about $ 23 million as soon as possible to meet the requirements of the current disaster.

In neighboring Zambia, schools were due to reopen on January 18th, but this was delayed by another two weeks due to a growing number of cases. They will now open on February 1st, authorities said.

Zimbabwe, like Malawi, only allows the opening of exam classes, but under strict Covid-19 rules.

Rwanda has closed schools in the capital, Kigali, with the possibility of closing schools in other regions if more cases are confirmed, according to the country’s education minister. The cabinet ordered a complete blockade of the city on Monday.

Parents “in trouble and anger”

However, in Nigeria, Africa’s most populous country, schools opened on January 18th, despite opposition from some lawmakers and a growing number of cases in the country.

“After extensive consultation with relevant stakeholders … the consensus of the opinion is that the resumption date of 18 January should remain, while parents and relevant institutions should ensure full compliance with the COVID-19 protocols …”, said the Federal Ministry of education in aa statement.
Nigeria registered 1,386 new cases and 14 deaths on Wednesday, according to the Nigerian Centers for Disease Control, with Lagos alone having 476 cases. The number of cases in the country exceeded 110,000 on Monday.

Parents there told CNN they were concerned about the decision to return the children to school.

Brenda Uphofo, director of the Lagos Festival, said she had chosen to keep her nine-year-old son at home.

“I don’t understand why this is happening,” she said. “I’m so in trouble and angry. Is it okay for children to miss school? They can catch up when it’s safe.”

South Africa, which has the most cases in Africa and is dealing with a new virulent strain of the virus, delaying the reopening of schools by another two weeks.

“Given the pressure experienced by the health system over the last few weeks caused by increased COVID-19 infections that led to the second wave, the Board of Education… Decided to postpone the rebuilding of both public and private schools,” the Minister of Primary Education, Reginah Mhaule, MP said in a statement.

South Africa registered 12,710 new cases on Wednesday, bringing the total number of infections to nearly 1.4 million. 566 died from the virus and another 839 died the day before, according to data from Johns Hopkins University.

In Malawi, hospitals are “overwhelmed” with patients and empty beds are scarce. Medical supplies, including ventilators, are also in short supply.

Chakvara declared a national disaster Ohn January 12 in all 28 districts of Malawi in response to the recent jump.

He has since called for support from donors, including the United Nations.

But there has been criticism of the state’s handling of the virus. A recent Oxfam report shows that the previous government – which lost power last June after a run-off presidential election – used 80% of the money raised to fight Covid-19 for bonuses. The charity warned the current government not to repeat the same mistakes.

Onjezani Kenani, a campaign participant calling on the government to equip hospitals with medical supplies and personal protective equipment, requested donations to help hospitals through a Facebook post on January 15th.

“Friends, I prefer action,” he said. “We can point out things that our government is not doing right, but the fact is that people are suffering there and some are dying. Because the government is doing its part, you and I can hear and do ours.”

“I’m calling for donations so we can buy oxygen pressure regulators – they enable oxygen cylinders to deliver oxygen to patients,” said Kenani, whose fund has raised $ 100,000 so far.

“I therefore welcome the efforts of private citizens who are already conducting capital campaigns to raise money to meet these needs,” said President Chakvera, acknowledging the efforts. “I would like to call on private sector companies to follow this example and practice their corporate social responsibility at this critical time.