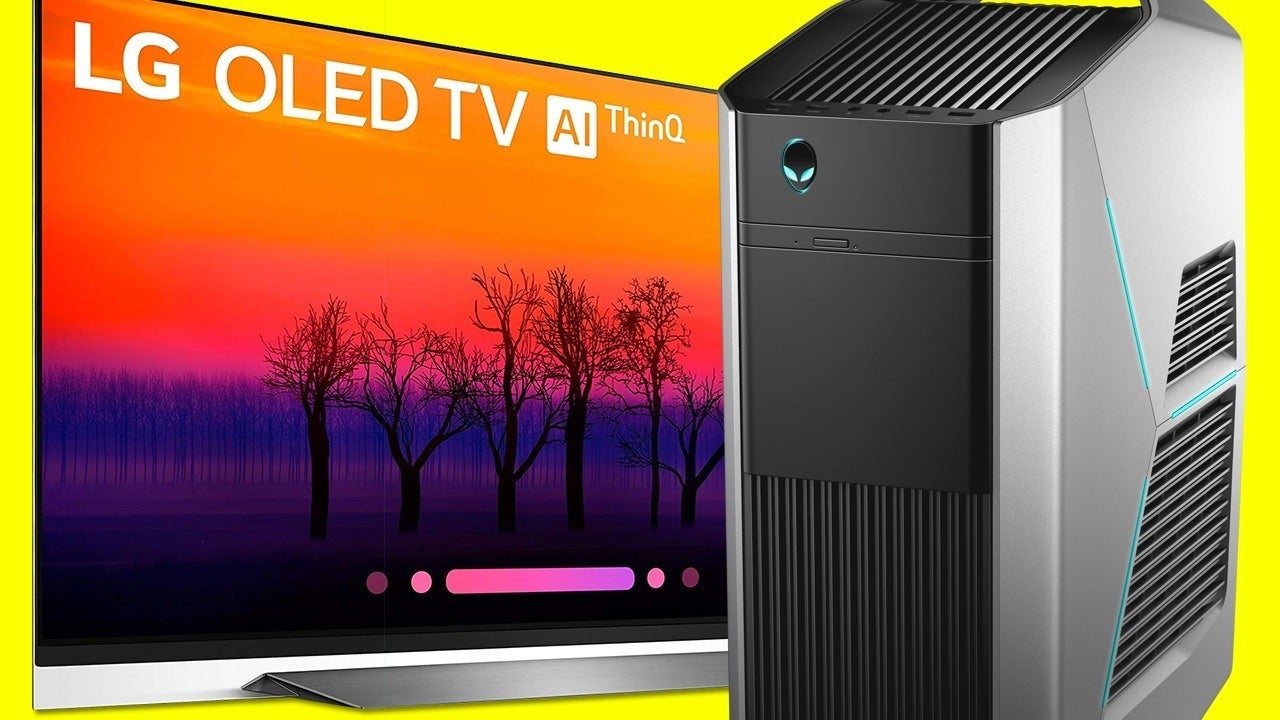 We bring you the best deals we've found today on video games, hardware, electronics, and a bunch of random stuff too. Updated 7 days a week, 365 days a year.

This is the best price all year long on this LG OLED 4K TV. OLED TVs are still considered the TV to buy if you want the absolute best image quality.They are superior to traditional LED LCD TVs thanks to their unparalleled contrast ratios and black levels.Of course they are also fully HDR compatible and have Smart TV functionality.

The price for this TV is the best you'll find on the Internet, but the gift card is what makes this deal really stand out. The gift card can be used on anything at Dell, including video game consoles, monitors, PCs,

The Vizio P-series TV lineup is often considered Vizio's cream of the crop, but there's actually a TV model that's even superior, and that's the P Quantum series The Quantum series improves image quality by increasing the number of active LED dimming zones to 200 and pumping up brightness to 1100 nits, making it an exceptional 4K TV and HDR content Other features include 240Hz refresh rate, ultra -thin bezel, Chromecast built right in, and included SmartCast remote with voice recognition.

Dell offers some great TV deals during its Labor Day Sal e. You will find both value-minded and uber high end options available. Not only are these TVs marked down to the lowest current prices you'll find anywhere, they also include a gift card that can be used on almost anything at Dell.com, including consoles, monitors, games, video cards, and PCs. You will receive a gift card within 2 weeks after the TV ships and performs a 90-day expiration.

This beast of a rig should handle every game you can throw at it, including VR games. The Intel Core i7-8700 6-core processor is still one of the best processors to get for gaming and overclocks very well. It's paired with the RTX 2080 video card, which is superior to the GTX 1080 Ti (the previous generation's fastest video card).

If the config above is too rich for your blood, then try this one. The Intel Core i5-9600K processor is every bit as good as the i7-8700 for gaming. The RTX 2070 video card is definitely no slouch; it's better than the previous generation GTX 1080.

The Alienware m15 is a newly designed 15" laptop for 2019 and weighs only 4.8lbs, which is remarkably given its payload. We reviewed the m15 and highly recommend it. This particular model pairs an 8th generation Intel Core i7-8750H 6-core processor with a very capable GeForce GTX 1060 video card with a full 6GB of VRAM (not the gimped 3GB version). It's a great matchup especially with the 15 "1080p 144Hz IPS display.

This Alienware m17 is a newly designed 17 "laptop for 2019 and weighs only 5.8lbs, which is remarkably given its payload. We reviewed the m15 (15 "model) and highly recommend it. This particular model pairs the 9th generation Intel Core i7-9750H 6-core processor with the latest GeForce RTX 2070 Max-Q video card.

Here's a stupid big discount on a game that was just released last week and scored very high here at IGN. Both the Xbox One and PS4 versions are discounted, but if you're playing on the Xbox One you can save an extra dollar. Use that dollar to buy something at the dollar store. yours.

We rated this game an "A" mazing "9.5 / 10. Brandin Tyrell writes " A stylish, focused stealth-action take on the FromSoftware formula that's something amazing all its own ." If you like Souls or Bloodborne at all, this game is an absolute must buy.

This sponsored deal was brought to you by Udemy.

This inexpensive course will teach you HTML, CSS, JS, Node, and much more.

The Asus Blue Cave Router has an atypical design but has been well-rated by professionals and users alike. It boasts commercial-grade security and Amazon Alexa integration that allows for voice control of your home network.

This 9-disc set includes all three films from the latest Star Trek trilogy in both 4K UHD and Blu-ray, a Timeline foldout poster, and hours of special features.

It's like RGB, but for your entire home. This Philips Hue set includes three color changing light bulbs as well as the Phililp hub. The A19 bulbs screw into any standard light bulb and allows you to choose from over 16 million colors. This is the best deal we've seen so far and usually only available on Black Friday.

find a PC with better specs under $ 1300, period. This PC is equipped with an 8th generation Intel Core i7 6-core processor, GeForce GTX 1080 Ti video card, more RAM than you will ever need, tons of SSD and hard drive storage, and a 2 year warranty.

The Alienware AW2518HF 25" 1080p Monitor is all about speed and gaming accuracy. Besides having a blazing fast 1ms response time, this is one of the very few monitors that can support a 240Hz refresh rate. This is the lowest price we have ever seen for this monitor. The AW2518H model adds GSYNC functionality.

If you want a new 2019 model AND a tremendous value, then take a look at this Dell G5 gaming desktop. Again, this is a customizable config so you can pick and choose your preferred combination of components. The config we chose gives you a 9th generation Intel Core i5 6-core processor and a powerful GTX 1660 Ti video card for about $ 800. That's hard to beat. You can upgrade the video card all the way up to the RTX 2080 and you only have to pay an extra $ 20 for the required power supply upgrade.

The new 2019 Alienware Aurora desktop is here. With it comes a whole new facelift, improved thermals, a new RGB LED lighting system, toolless chassis for easy swapping of parts, and performance-minded components. You can customize this config yourself and the code will still work, but the one we provided here is a great bang for your buck. It has the capacity to handle any of your games at up to 1440p resolution and the GTX 1660 Ti is the most powerful card before you'd spend $ 100 on an 850W power supply upgrade.

This is the only deal we've seen far that includes the recently released Nintendo Switch with the bigger battery.

For no extra cost you get a free Ematic wired controller, or you can pay an extra $ 7 for the wireless model. ] For the first time ever, all fifteen Godzilla films from Japan's Showa era are now available in one definitive 8-disc set. This Criterion Collection includes all movies digitally remastered in HD with new English dub tracks and translations, premium packaging, deluxe hardcover book with detailed notes on each movie, and plenty of additional supplementary material.

This preorder bundle just went up on Amazon. This sweet looking bundle includes an Xbox One X 1TB console with a custom Gears 5 themed, matching wireless controller, the Gears 5 game, full copies of Gears 1-4, one month of Xbox Game Pass, and one month of Xbox Live Gold. The bundle is out on September 6th.

Switch Lite Preorders Are Finally Up On Amazon. The Switch Lite is lighter than the original Switch, has integrated (non-detachable) controls, and does not have a docked mode. But the biggest difference? It's $ 100 cheaper.

This is a YMMV (your mileage may vary) deal because the code only works for people who has never purchased an Amazon gift card before. Add a $ 50 gift card to your cart and apply the code. If the code was successfully applied, you should be receiving a $ 15 credit to your Amazon balance within 3 days.

The Sega Genesis Mini is now up for preorder with a slated release date of September 19. 40 games will be pre-loaded onto the console. The full list of games can be found in our "Sega Genesis Mini" article. All reports indicate that Sega is going to this release right. According to our own Seth Macy, " if you have emulation worries, Sega has M2 working on emulation for its mini console. If you're unfamiliar with M2, it handled the excellent Sega Ages Collections and also the delightful Sega 3D Classic collections for Nintendo 3DS. It would be hard to find a developer with a better pedigree to handle the software for the first-party Sega Genesis Mini. "

11% Off the Batman Beyond The Complete Series Deluxe Limited Edition on Blu-ray, Now $ 89.30

The Deluxe Limited Edition includes all 3 seasons (52 episodes) in remastered high definition, The Batman Beyond: The Return of the Joker animated movie on Blu-ray, Metallic Batman Beyond Funko POP and more . You even get a digital copy (including the movie).

Eric Song is IGN's deal curator and spends 25% of his pay on stuff he posts.