Ebola spreads in Uganda – 2 deaths, 27 in contact – WHO calls for urgent meeting 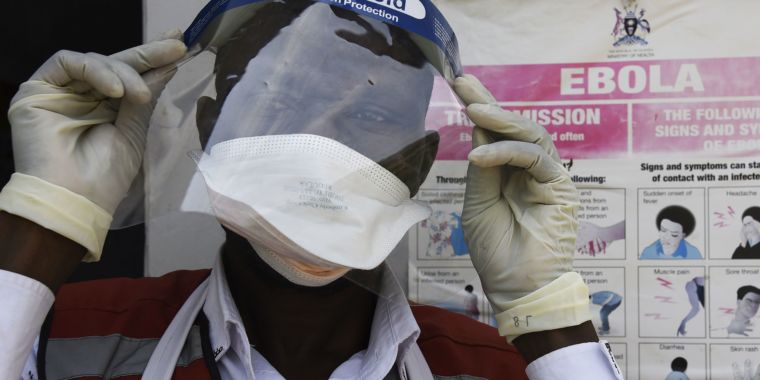 Local and international health officials are trying to stifle the outbreak Ebola in Uganda, which spread this week from a massive, monthly epidemic in the neighboring Democratic Republic of Congo. The outbreak of the disease increased by 2 084 people and killed 1 405 from last August.

Uganda announced its first case since the outbreak on Tuesday, June 11th. The case was the 5-year-old Congo boy who traveled across the border a few days earlier. The Ugandan Ministry of Health reported shortly thereafter that the boy succumbed to his infection on June 12 morning . At that time, two of his family members also had positive results: the boy's 50-year-old grandmother and his 3-year-old brother.

Today, June 13, the ministry announced that grandmother has also passed . During an emergency meeting on the situation, officials from Uganda and the DRC decided to send the remaining family to the DRC. This includes a three-year-old boy with a confirmed case, as well as his mother, father, 6-month-old brother and their maid. The health authorities noted that the last four family members are considered "suspicious cases".

Infected 3-year-old children in the DRC currently have zero confirmed cases in Uganda. However, there are three non-family members who have had contact with the deceased 5-year-old and are now considered dubious cases. They are kept in isolation in a treatment unit of Ebola in the western city of Uganda Bevera. He sits on the border with the DRC and is where the 5-year-old child is being treated

Officials have identified 27 others who have had contact either with the deceased boy or with the suspected cases.

In this sense, Uganda remains in Ebola's "response regime," the ministry said. The DRC donated 400 doses of the Ebola vaccine, and Ugandan respondents are planning to start ring vaccination on Friday, June 14th. The aim of this effort is to immunize contacts with contacts and contacts to prevent the spread of the disease. The World Health Organization has performed 4,000 additional doses of vaccine, which is 97.5% effective, according to preliminary data.

Also on Friday, the WHO will convene an Emergency Committee to assess whether the outbreak of the disease is now "a public health emergency of international concern" or PHEIC. Declaring the outbreak as such would signal the need for international responses and likely lead to more resources to curb the spread of the virus.

The outbreak in the DRC has been raging since last August in the provinces of North Kivu and Ituri in the DRC. Officials gathered 2 084 cases on 11 June (1,990 confirmed, 94 possible cases), 1 405 deaths (1 311 confirmed, 94 probable). These figures make the outbreak the second largest since the West African epidemic in 2014, which suffered more than 28,000 cases and killed 11,000 people.

So far, violence and ongoing conflicts have seriously hampered the medical response to the outbreak. Fighters have attacked medical facilities many times, and an epidemologist from the WHO was assaulted last month.

North Kivu and Ituri are located in the eastern part of the country, bordering South Sudan, Uganda and Rwanda. However, despite local challenges in response to disease, WHO staff have so far found that the outbreak is not PHEIC. The Friday meeting will be the third to assess the possible PHEIC status for this outbreak.