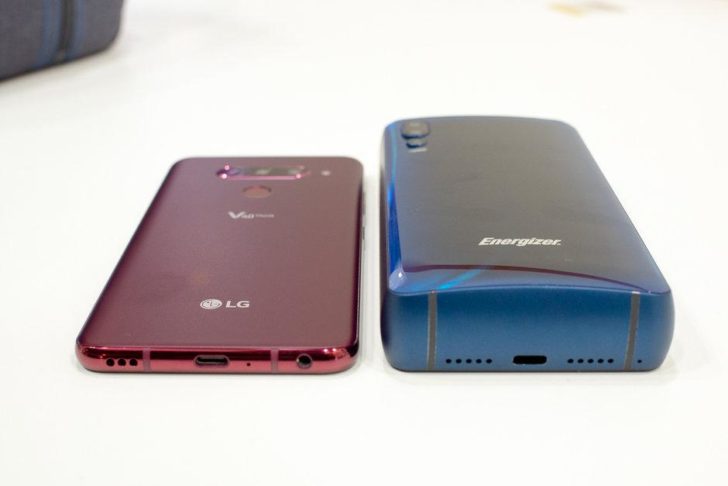 Earlier this month we announced that Energizer is planning to announce countless MWC phones. The rumors were that some of them would have a pop-up camera and could even play with a 18,000 mAh battery. Considering the brand's experience in energy storage, it was fair to expect the headphones to get a respectable battery size, but we did not think it would represent anything as big as the actual brick.

It turns out that the vine was right; The Power P18K Pop has a pop-up camera and a 18,000mAh battery that promises up to 50 days of standby. However, given its depth (there is still some confusion about 18 or 30 mm), the device is so thick that it hardly resembles a phone and instead looks like a giant power-on-screen banner captivated on it.

It is unclear what Energizer was thinking about when defining the camera's features because the Mediatek Helio P70 SoC can not coincide with the latest Snapdragon 855, Exynos 9820 or Kirin 980 processors, and the 1

080p 6.2-inch LCD screen is just sub-rated. However, the other components of the phone seem acceptable, as they have 6GB of RAM, a three-way rear camera setup, a dual lens sensor and two SIM card pads, one doubles as a microSD slot. headphone jack, which is a bit more difficult to swallow, considering how much room Energizer has to enter. Finally, thanks to the roll-on feature, Power Max P18K Pop can serve as a power bank (spirit!), So you can charge other devices that are slimmer.

This is literally my dad. pic.twitter.com/x4K8xluEpo

The device has neither water nor impact resistance, means it can actually serve as a weapon if you decide to throw it on someone or even double up as a fishing accessory if you drop it into a lake. Let's hope at least that Energizer knows what it's doing and will save us another fiasco like Note 7 because I do not even want to imagine what happens if these massive 18,000 mAh will light up … Assuming your pockets are large enough to wear the Power Max P18K Pop, you'll have to wait until June to buy it – it's long enough to think about how you will carry it with you.