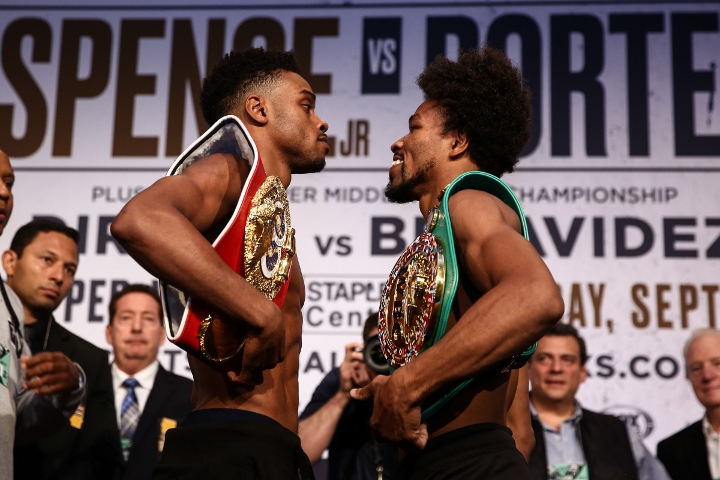 LOS ANGELES – Errol Spence, Jr. knows that Sean Porter's perseverance is one of the greatest qualities of a WBC light heavyweight champion.

Spence is also confident that he will ultimately win Porter's determination in their 12th round 147-fight to unite the pounds. The undefeated IBF Champion has promised again on Friday that he will become the first opponent to knock out the hard-working, gritty Porter on Saturday night at the Staples Center.

"I know he is a solid fighter, he will come to fight," Spence told FOX Sports & Heidi Androl after weighing them at the Intercontinental Los Angeles hotel. "But as I said, I will violate his will and be the first person to stop Sean Porter."

Kel Brooke defeated him with a majority decision to take the IBF light heavyweight title by Porter in August 2014 in Carson, California. In June 2016, former WBA middleweight champion Keith Thurman led Porter by unanimous decision in a closely contested match.

Porter battled Thurman and Brooke and defeated five former heavyweight champions, including Danny Garcia. With all due respect to its long list of quality opponents, Porter believes Spence will provide the toughest test of his career in the main event of four-bit FOX Sports Pay-Per-View telecast (9pm ET / 6pm) PT; $ 74.95 in HD).

Keith Idek is a senior writer / columnist at BoxingScene.com. You can find him on Twitter @Idecboxing.