ESPN's Jackie MacMullan on Kyrie Irving Rumors: 'I do not put any stock in it' 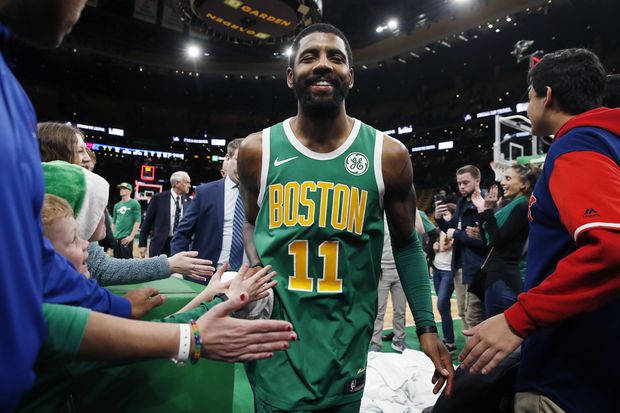 The NBA's silly season has been crashing through the wall like Kool Aid Man this week. Anthony Davis' trade request has been accompanied by all sorts of rumors, most notably the idea that there is growing concern that Kyrie Irving may not re-sign with the Boston Celtics and is, in fact, interested in reuniting with LeBron James

Jackie MacMullan was on ESPN's "Around the Horn" on Tuesday and she shot these reports down when asked if she heard similar things saying "I'm going to say this, there is some frustration from Kyrie Irving. Of course there is, because this team is not performing the way he had hoped and he is carrying a huge load, and he does not want to be James Harden of New England, OK. But, it's January. He has not made any kind of seismic decision like that. And let's say even if he's a little unhappy and a little unsure, do not you think bringing Anthony Davis onboard may quell all those fears or concerns for Kyrie Irving? So, I do not put any stock in it. Sorry. "

She starts the segment clearly suggesting that Davis' agent, Rich Paul of Klutch Sports, is behind this. Paul, a long-time friend of LeBron James, seems to be driving Davis towards the Lakers and playing with LeBron. ESPN's Adrian Wojnarowski reported earlier today that Davis may soon declare a willingness to re-sign with Los Angeles.

If Paul is behind the slew of reporting suggesting Irving is open to Los Angeles, it could be part of a PR campaign aimed at pushing Davis to Los Angeles by the trade deadline. If the New Orleans Pelicans feel Irving is a flight risk, they could fear Boston will drop out of the race for Davis and keep all the assets they might be trading away. If the Pelicans feel Boston's assets are off the table, they may be inclined to accept the Lakers offer before the deadline.

It's hard to say if that's the case, but Jackie MacMullan is not the only person suggesting Rich Paul is feeding this beast right now. As always during trade deadlines and free agency, beware of rumors. There are people on all sides of them trying to push agendas to sway public opinion and plant seeds in the heads of people involved.