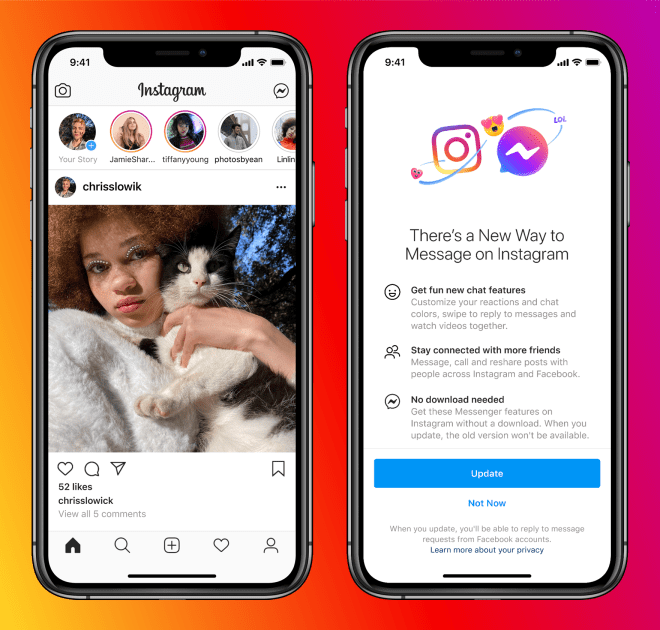 During a briefing with reporters, Facebook representatives repeatedly stressed that the update is such no merge your Facebook and Instagram accounts or combine mailboxes. If you use both applications, you will still be able to send and receive messages separately. Facebook also allows you to control whether you want non-Instagram users to be able to send you messages on Instagram and whether non-Facebook users can talk to you on Messenger.

Loredena Krisan, vice president of product design for Messenger, likened the change to turning messages on Facebook more like email. “Just like you can talk to a Gmail account today, if you have a Yahoo account, those accounts will be able to talk to each other through the shared protocol, which is Messenger,” Krisan said.

The change also comes with some other messaging upgrades in the Instagram app, which have long lagged behind Messenger. Instagram users will be able to forward messages, add reactions or set chats to disappear automatically with a new “disappear mode”. The update will also improve Instagram’s tools for reporting harassment and other policy violations, as Messenger has more sophisticated reporting tools.

Krisan said that Facebook took this into account when creating the feature and that “we don’t even want to risk leaking identity in the apps”, which is why the social network allows users to disable messages between apps if I choose.

At the same time, Facebook has previously acknowledged that it links users’ accounts to its apps – even if they have never chosen to do so – so the concern is not entirely unfounded.

The good news is that all this is not mandatory yet – at least for now. Although Facebook makes the feature available to Instagram and Messenger users, it doesn’t force them to switch to the “new experience.”