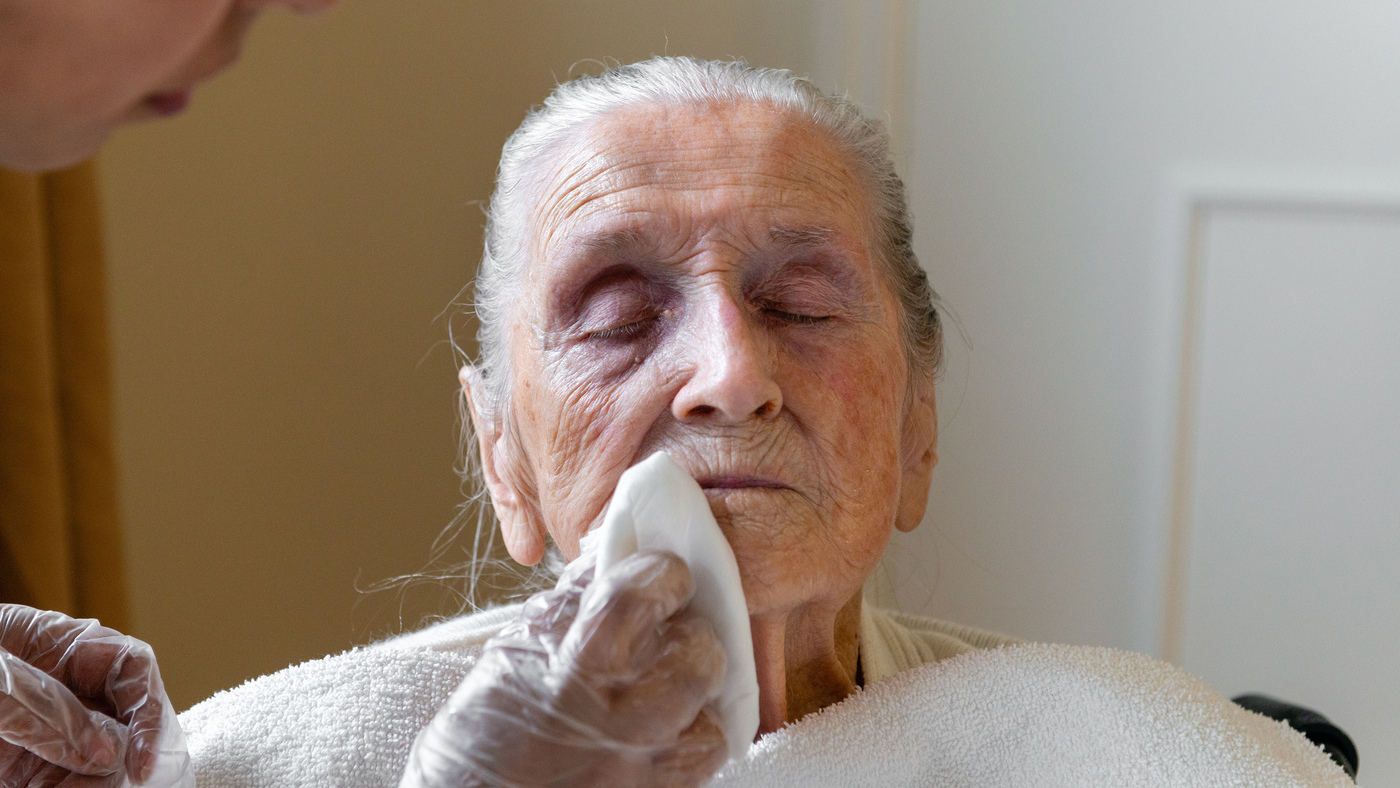 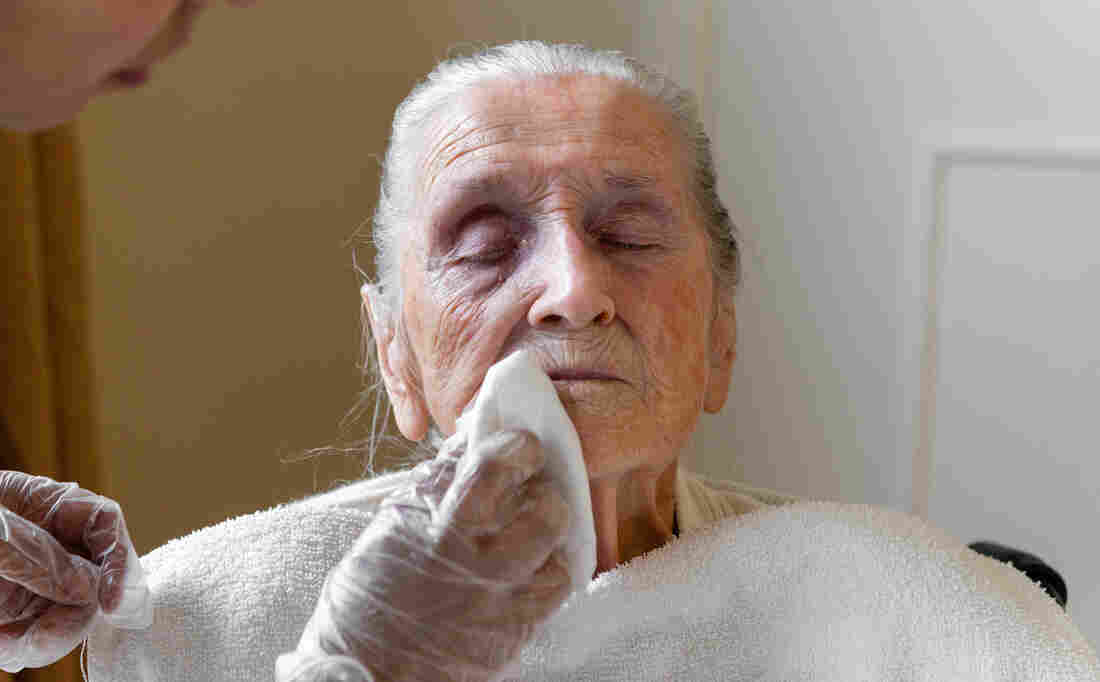 A certified breastfeeding assistant cleanses Neva Shinkle's face with chlorhexidine, antimicrobial wash. Shinkle is a patient at Coventry Court, a nursing home in Anaheim, California, part of a multi-center research project aimed at halting the spread of MRSA and CRE ̵

1; two types of bacteria resistant to most antibiotics.

A certified breastfeeding assistant cleans Neva Shinkle's face with chlorhexidine, antimicrobial wash. Shinkle is a patient at Coventry Court, a nursing home in Anaheim, California, part of a multi-center research project aimed at halting the spread of MRSA and CRE – two types of bacteria resistant to most antibiotics. ] Heidi de Marco / KHN

Hospitals and homes for health care in California and Illinois have a surprisingly simple strategy to stop dangerous, antibiotic-resistant hyperboles that kill thousands of people every year: washing patients with special soap. $ 8 million from the federal government's disease control and prevention centers are held in 50 establishments in these two countries.

This new co-operation recognizes that super-teenagers do not remain isolated in a hospital or nursing home, but move quickly through the community, says Dr. John Jennifer, who runs the CDC office to investigate healthcare-acquired infections. "No health institution is an island," says Jennifer. "We are all in this complex network." “/>

At least 2 million people in the United States infect some kind of antibiotic-resistant bacteria every year, and about 23,000

People in hospitals are vulnerable to these bugs, and people in homes are particularly vulnerable. Up to 15% of hospital patients and 65% of the nursing home population have drug-resistant organisms, although not all of them will develop infection, says Dr. Susan Huang, an infectious disease specialist at the University of California at Irvine. ] "Superbots are scary and not cut," Huang says. Some of the most common bacteria in healthcare facilities are resistant to methicillin Staphylococcus aureus, or MRSA, and carbapenem resistant Enterobacteriaceae, or CRE, often referred to as "nightmare bacteria." E. coli [1959906] and Klebsiella pneumonia are two common microbes that can fall into this category when they become resistant to antibiotics known as carbapenems. CRE bacteria cause approximately 600 deaths each year, according to the CDC.

CREs are "predominantly distributed" among healthcare providers in the Chicago area, says Dr. Michael Lin, an infectious disease specialist at the Rush University Medical Center headed the CFC-funded efforts there. "If MRSA is hypersensitive, it's the extreme super super."

Containing dangerous bacteria is a challenge for hospitals and homes. As part of the CDC's efforts, doctors and health workers in Chicago and Southern California use the antimicrobial chlorhexidine soap that has proven to reduce infections when patients bathe with it. 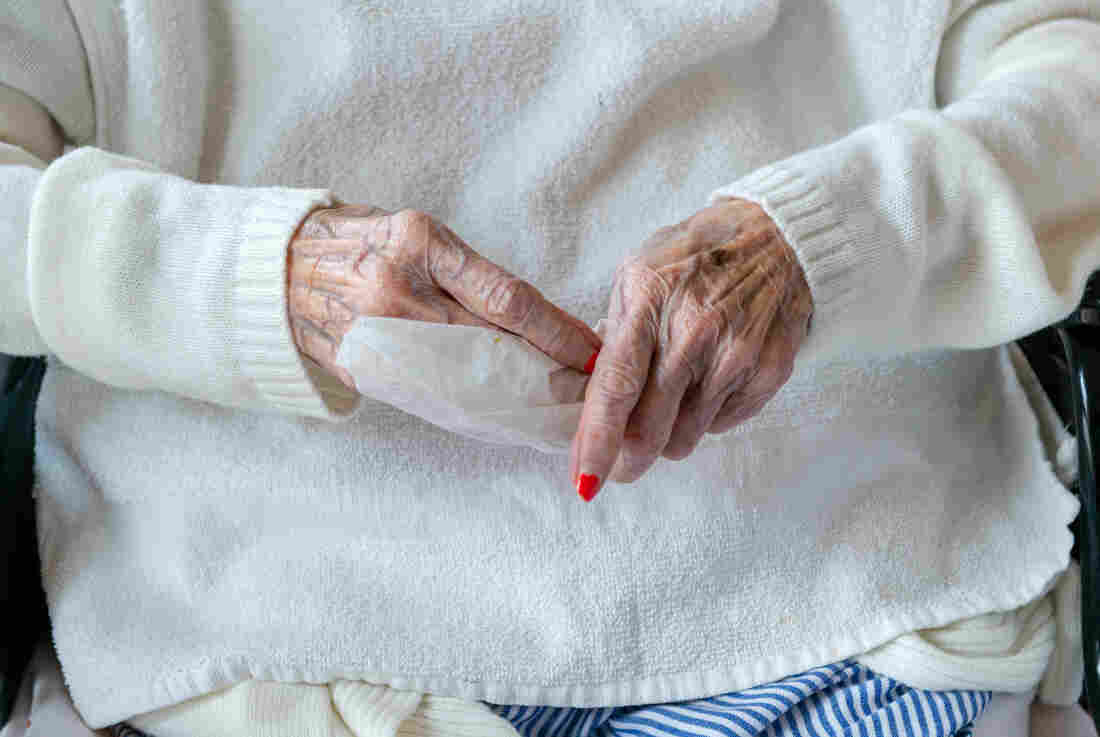 The Centers for Disease Control and Prevention fund the project. in California, based in Orange County, where 36 hospitals and nursing homes use antiseptic washing, along with an iodine-based nose pad, on patients to stop the spread of lethal superfibers. 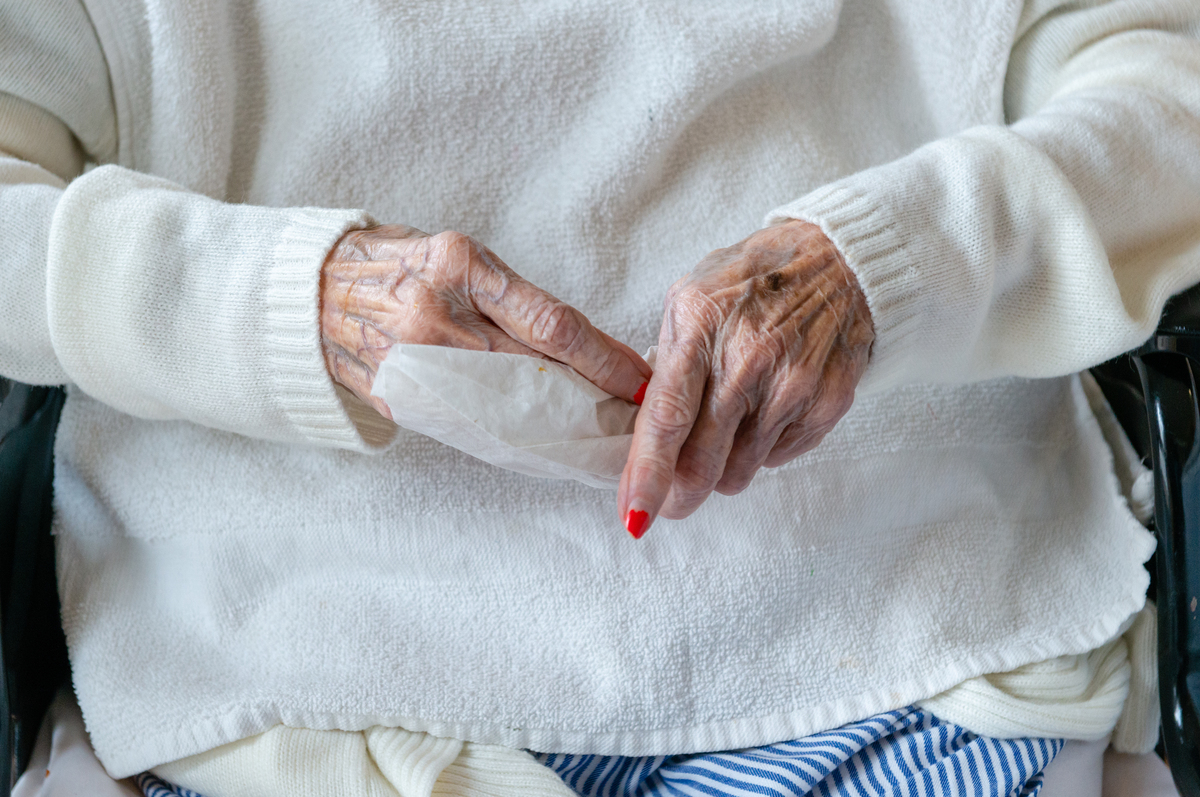 Although hospital intensive care units often rely on chlorhexidine to prevent infections, it is less commonly used for bathing in elderly homes. Chlorhexidine is also sold without prescription; The FDA noted in 2017 that it had caused rare but severe allergic reactions.

In Chicago, researchers are working with 14 nursing homes and long-term acute care hospitals where staff checks people for CRE bacteria when taken and bathes them daily.

The Chicago project, which began in 2017 and ends in September, includes a campaign to encourage hand washing and enhanced communication between hospitals for which patients carry drug-resistant organisms. Indeed, three quarters of US nursing homes received quotes about infection control issues for four years, according to Kaiser Health News, and facilities with repetitive quotations were almost never fined. Residents of the elderly home are often sent back to hospitals for infections.

In California, health officials carefully monitor CRE bacteria that are less prevalent there than elsewhere in the country and try to prevent CRE from arrest, said Dr. Matthew Zan, medical director of epidemiology at the Health Care Agency Orange County

"We do not have much time," says Zan. "Taking a chance to make a difference in the CRE trajectory is now really important."

The CDC-funded project in California is based in Orange County, where 36 hospitals and adult homes use antiseptic wash along with iodine pad . The goal is to prevent new people from getting drug-resistant bacteria and to keep those who already have bacteria on their skin or elsewhere to develop infections, says Huang, who runs the project. 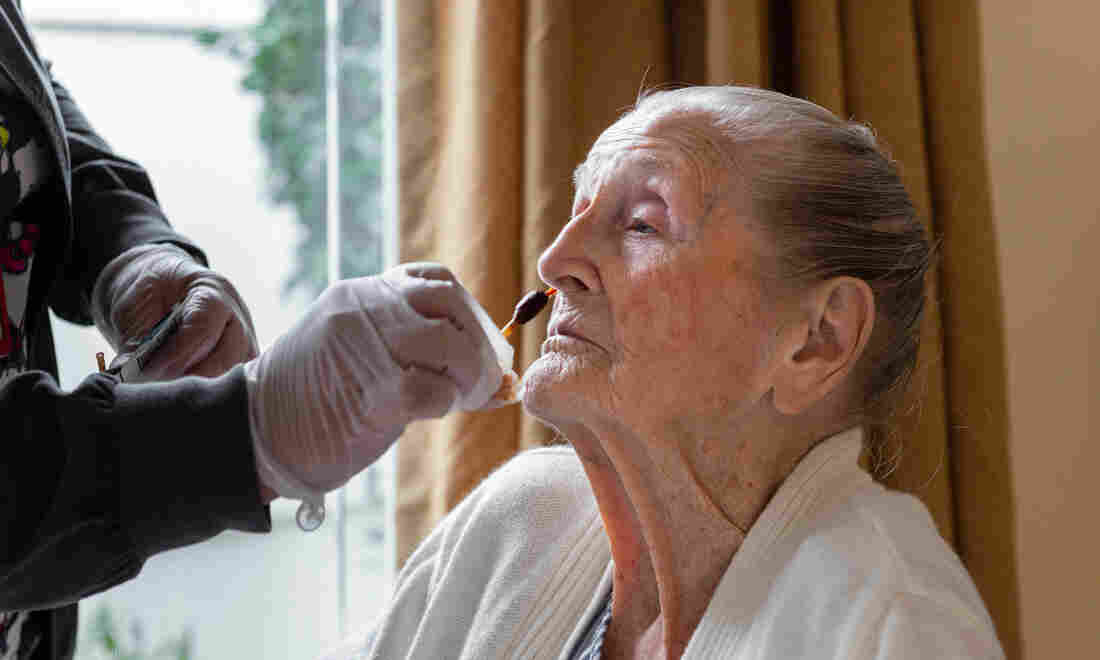 Licensed nurse Ioan Bartholom clears nose with an antibacterial solution of iodine in the Coventry Health Center. Studies have shown that patients may contain drug-resistant strains in their nose that have not yet made them sick. 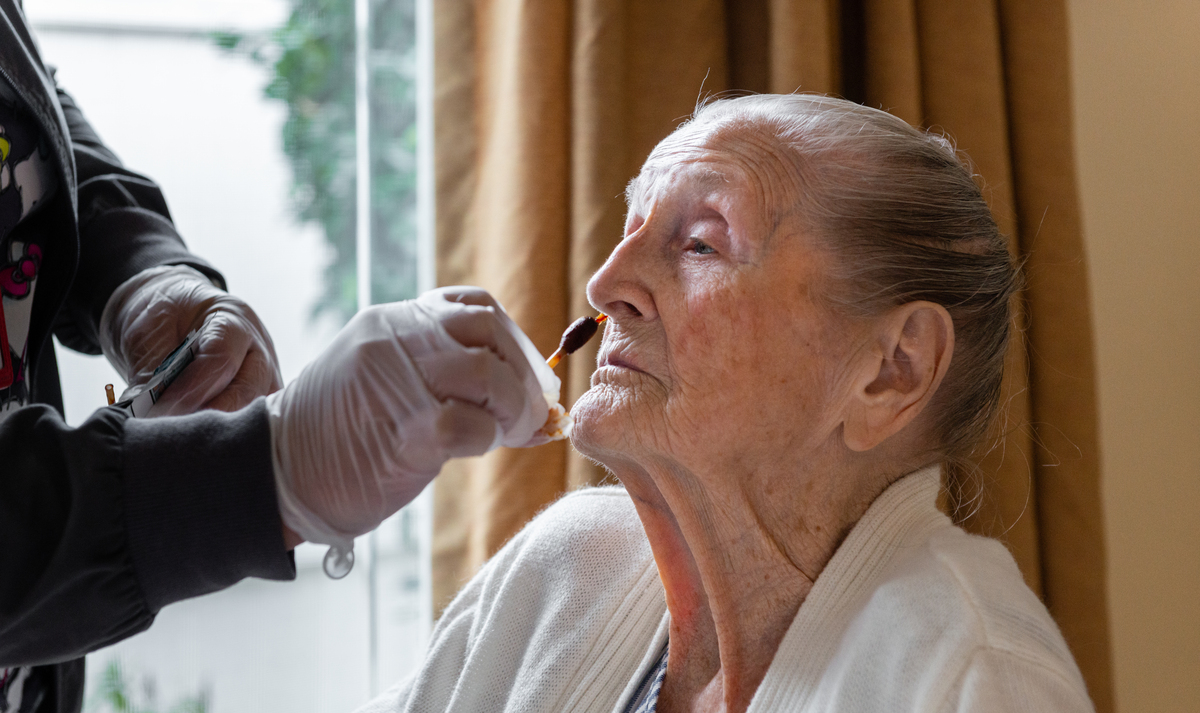 Licensed nurse Joanna Bartholomew wipes Shinkla's nose with an antibacterial, iodine-based solution at Coventry Health Center. Studies have shown that patients may contain drug-resistant strains in their nose that have not yet made them sick.

Juan started the project by exploring how patients moved between different hospitals and homes in Orange County – they found that they were doing so much than previously thought. This is a key issue, she says, "What can we do to protect our patients, but to protect them when they start moving anywhere?"

<img src = "https://media.npr.org/assets/img/2017/03/08/unlovelyladylump_final_kondrich_1npr_sq-8f33a04f78708c3b1c789adf56acf437b4e14520-s100-c15.jpg" data-original = "https: //media.npr "My unpleasant lady Lump: When MRSA is ugly but not her previous study has shown that patients, who have been carriers of MRSA bacteria on their skin or nose, for example, who for six months have used chlorhexidine for bathing and as mouthwash, and have wiped their noses with nasal antibiotics have managed to reduce the risk of developing of MRSA but all patients in this study, published in February in the New England Journal of Medicine have already been cleared by hospitals

The aim now is to target patients who are still in hospitals or old homes and to expand the work of CRE. Traditional hospitals involved in the new project focus on patients in intensive care units and those already carrying drug-resistant bacteria, while adult homes and long-term emergency hospitals carry out the cleaning – also called "decolonization" – of

A recent morning at Coventry Health Center, a nursing home in Anaheim, California, 94-year-old Neva Shinchel patiently sat in her wheelchair. Licensed nurse Ioanna Bartholomew rubbed her nose and asked if she remembered what he had done. "Kills microbes," Shinkla replied.

"That's right – it protects you from infection."

In a neighboring room, Senior Project Coordinator Raviena Singh from UCI spoke to 71-year-old Caridad Coca, who recently arrived at the club. She explained that Coca would be bathed with chlorhexidine rather than plain soap. "If you have an open wound or cut, it helps to protect yourself from infection," Singh said. "And we not only protect you, one man, we defend everyone in the old house."

Coca said he had a cousin who spent months in the hospital after receiving MRSA. "Fortunately, I never did," she said.

Coventry Administrator Court Sean Dahl says he is anxious to participate because people arrive at a nursing home with MRSA or other bugs. "They were sick and sick here," Dahl says.

The results of the Chicago project are ahead. The preliminary results of the Orange County project, which ends in May, show it looks like it works, says Huang. After 18 months, the researchers noticed a 25% drop in drug-resistant organisms in the nursing home population, 34% in patients with long-term acute treatment settings and 9% in patients with a traditional hospital. The most dramatic falls are in CRE, although the number of patients with this type of bacteria is smaller. Preliminary data also show a promising effect of ripples in non-effort facilities, a sign that the Zann project from the Orange County Health Agency says that in our community we are seeing an increase in antimicrobial-resistant infections, he says ( 19459031). "This allows the curve to bend and bend in the right direction." Kaiser Health News is a non-profit information service and an independent editorial program of the Kaiser Family Foundation. KHN is not associated with Kaiser Permanente.