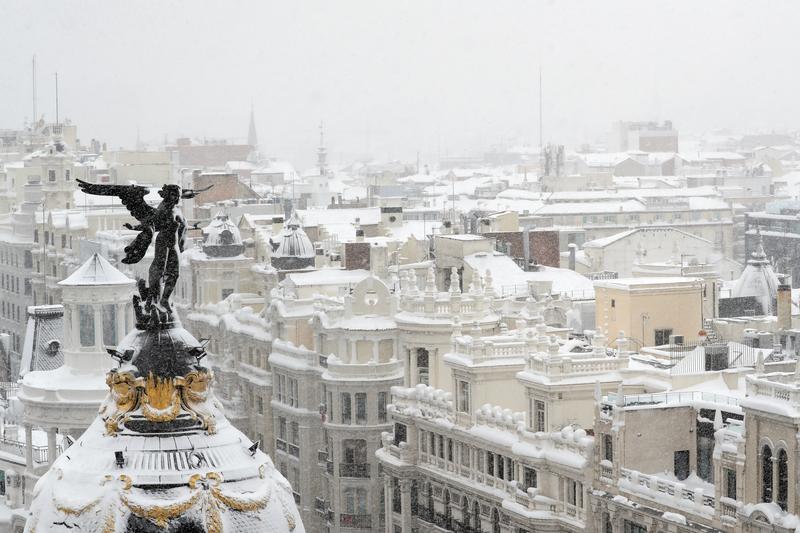 MADRID (Reuters) – Four people died in Spain as storm Philomena wreaked havoc on travel across the country, covering Madrid with the heaviest snowfall in decades and forcing authorities to mobilize troops to rescue trapped motorists.

Rescuers reached 1,500 people trapped in cars as skiers slid down the Gran Via, usually one of the busiest streets in the capital. Other Madrid residents used the monstrous blizzard to snowboard down the road or to throw snowballs at each other.

A man and a woman traveling by car drowned after a river broke its banks near Malaga, southern Spain, and two homeless people froze to death, one in Madrid and the other in the eastern city of Calatayud, authorities said.

In response, King Felipe VI and Queen Letizia tweeted: “The royal family would like to express their grief for the victims of the storm … and demand extreme caution against the risks of ice and snow.”

Interior Minister Fernando Grande-Marlasca called on Spaniards to avoid all but essential travel. “We are facing the strongest storm in 50 years,” he said.

More than 650 roads were blocked by snow, Grande-Marlasca said, leaving some drivers trapped in their cars from Friday night to Saturday.

Patricia Manzanares, trapped in her car on the M-40 motorway in Madrid from 19:00 on Friday, told RTVE: “I was stuck here without water or other assistance.”

Aena, who controls the country’s airports, said Madrid’s Barajas airport, which was closed on Friday night, would remain closed until the end of Saturday. According to him, at least 50 flights to Madrid, Malaga, Tenerife and Ceuta, Spanish territory in North Africa, have been canceled.

The State Meteorological Agency said it was the heaviest snowfall in Madrid since 1971, while Jose Miguel Vinas, a meteorologist at Spanish National Radio, said it had fallen between 25cm and 50cm (10-20 inches) in the capital. which, according to him, made it the biggest snowfall since 1963.

Atletico Madrid’s match against Athletic Bilbao, which is scheduled to start at 1515 GMT on Saturday, has been postponed, La Liga said in a statement.

The driver of the Valley Lyft was insulted with racist, homophobic insults after the trip

Chinese scientists may have a key to slowing aging