Gareth Foster brought his gun to Austin’s protests. He was then shot. 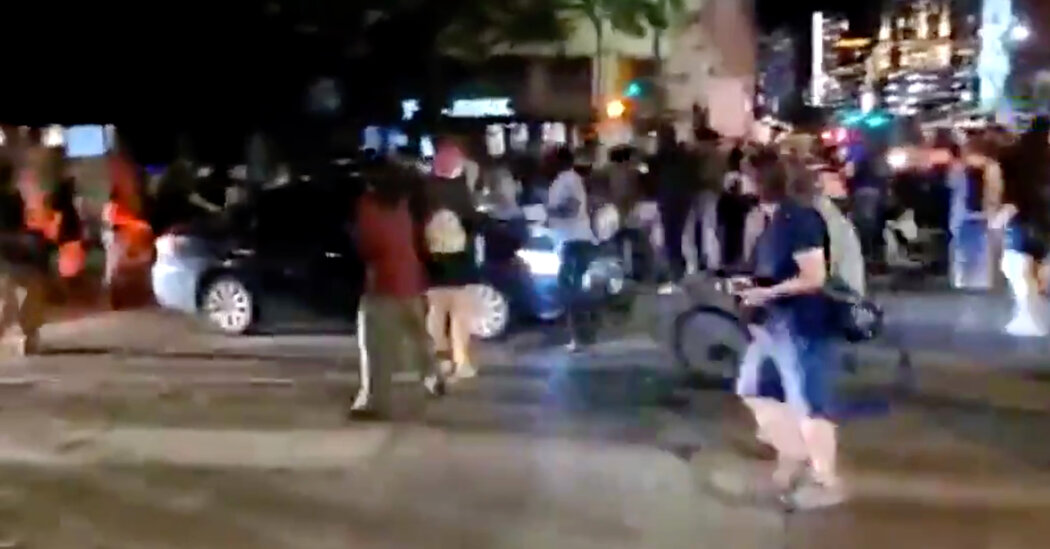 Austin, Texas – It was not uncommon for Gareth Foster to protest police brutality on Saturday night. And it was not typical for him to be armed while marching.

Mr. Foster was carrying an AK-47 rifle when he joined the Black Lives Matter demonstration blocks from the State Capitol in Austin, Texas. Proponents of gun rights, both left and right, often carry rifles to protest in Texas, a state whose liberal gun laws allow it.

Mr Foster, wearing a black bandana and baseball cap, came across an independent journalist at Saturday’s march, and he spoke in essence about the weapon that was strapped to him.

“They don’t allow us to march through the streets, so I have to exercise some of our rights,” Mr Foster told Hiram journalist Gilberto Garcia, who was broadcasting the live interview on Periscope. “If I use it against the cops, I’m dead,” he admitted.

Later that evening, Mr. Foster was fatally shot, but not by police. Authorities say he was killed by a motorist who threatened protesters with his car.

Police and witnesses said the man in the car directed her aggressively toward the marches, and then Mr. Foster approached her. The driver opened fire and shot Mr Foster, who was rushed to hospital and later pronounced dead.

The shooting stunned a capital where demonstrations and marches are a proud and common tradition. Until Sunday, Austin police released little details about the shooting or the motive or whether prosecutors planned to file charges against the unidentified motorist, who was detained and co-operating with authorities. A GoFundMe page to help Mr. Foster’s family with his funeral expenses had already raised nearly $ 50,000 on Sunday afternoon.

Mr Garcia, a freelance journalist, has filmed numerous demonstrations in Austin in recent weeks, and he has captured the chaotic moments in live video footage. Protesters are seen marching through an intersection when a car blows up its horns. Participants appear to be gathering around the car as one shouts, “Everybody stand up.” At that moment, five shots were heard, followed recently by several more loud explosions echoing through the city center streets.

Mr Foster, who served in the military, is armed but is not looking for problems with the campaign, relatives and witnesses told reporters. At the time of the shooting, Mr. Foster pushed his fiancé across the street into his wheelchair.

Mr. Foster and his fiancée Whitney Mitchell took part in protests against police brutality in Austin on a daily basis after the murder of George Floyd in Minneapolis. Mr. Foster is white, and Mrs. Mitchell, who has been quadrupled, is African-American. She was not injured in the shooting.

“He did it because he felt really strong about justice and was very strong against the brutal police and wanted to support his fiancée,” said Mr. Foster’s mother, Sheila Foster, in an interview with Good Morning America, adding that she was not surprised. that he was armed while on the march.

“He has a license to wear and would feel the need to defend himself,” Ms. Foster said.

In Texas, it is legal to carry rifles, shotguns and other so-called. Long rifles on the street without a permit, as long as the weapons are not cut in a threatening way.

The shooting took place shortly before 10 pm at the intersection of Fourth Street and Congress Avenue.

Witness Michael Capocchiano said he was marching with other protesters when he saw a motorist bend his horn and turn to the crowd, forcing people to disperse.

“You heard the wheels squeak from the impact of the gas so fast,” said Mr. Capochiano, a 53-year-old restaurant accountant. “I am a little surprised that no one was hit. He drove at an aggressive speed in the crowd. “

The car stopped after turning from Fourth Street to Congress Avenue and appeared to hit a pylon. As people shouted angrily at the driver, Mr. Foster walked toward the car, the muzzle of his rifle pointing downward, he said.

“He did not aim at the weapon or did anything aggressive with the gun,” Mr Capociano said. “He didn’t hold it aggressively.” He added: “I’m not sure if there was a big exchange of words. It wasn’t like there were any verbal arguments. It did not charge in the car. He just went there.

Mr Capociano, who was standing near the back of the car, said he saw a gun pop out of the driver’s window and heard multiple shots.

“I saw him come down,” he told Mr. Foster. “I heard people shouting, ‘There’s a gun, get down.’ As far as I know, he only shot at the victim. I have a feeling he’s just shooting at this man. “