Giants beat Cubs 5-4 with late rally, go above .500 for the first time 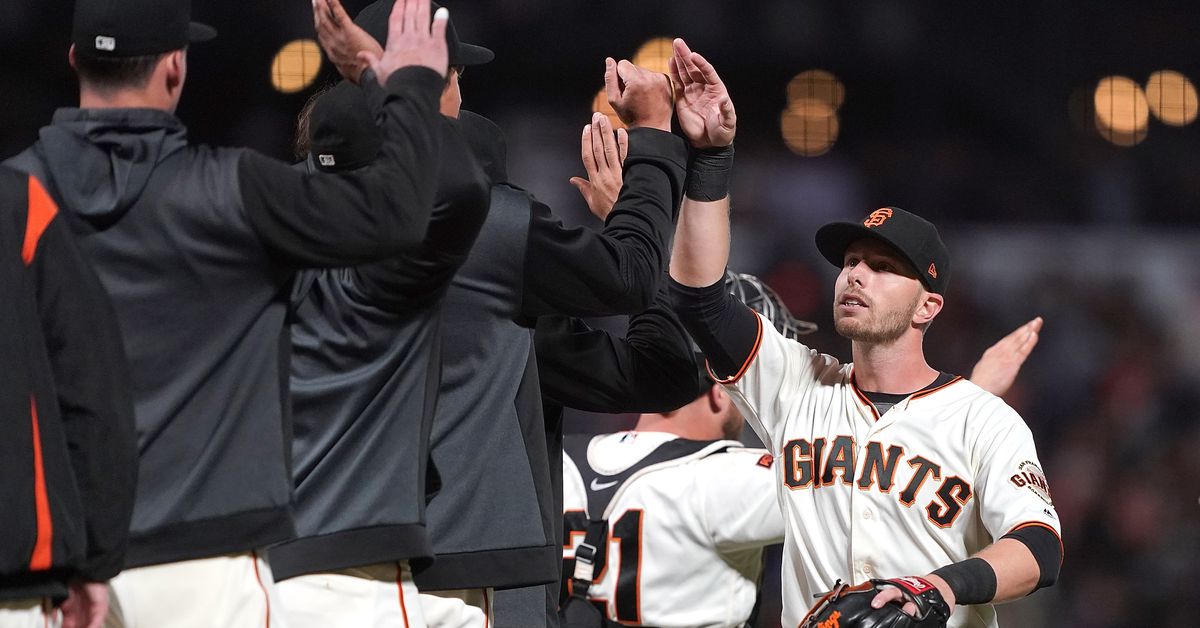 For a while, the San Francisco Giants 5-4 victories over Chicago Cubs on Monday night had all the moods of one of their early-season losses.

The Giants puttered along, staying within the striking distance of the Cubs, but never looking pretty on their level. Chicago jumped out to a 3-0 lead, behind something that those April and May Giants knew nothing about: home runs.

Robin Garcia and Kyle Schwarber had a couple of dingers, the former being one of the most impressive splash hits I can remember seeing by someone whose name does not rhyme with "hairy swans."

The Giants kept pace, with Shaun Anderson limiting the damage, and the bullpen pitching beautifully. The offense showed grit, but an inability to hit the ball hard, far, or when it was needed most. Through seven innings, the Giants had nine hits, but only a double by Stephen Vogt had gone for extra bases.

And then the eighth innings came around, and the Giants continued to make a compelling case for being a competent baseball team ̵

1; a case they've been making for two months now.

Pablo Sandoval led off the inning, and he was in dire need of a hit. Not only had Sandoval struggled mightily since the All-Star break, but he was 0-3 in the game, with all three outs ending an inning, including a double play with runners at the corners. And get a hit he did, roping one in the right corner corner, and hustling to beat out a nice Jason Heyward throw at second base.

After a Vogt strikeout, Brandon Crawford sent one back up to the middle to Sandoval, and cut the lead in half. But a tailor-made ground ball from Kevin Pillar threatened to once again cut a rally short.

Apologies for spouting clips, but baseball is a game of inches. The Giants trailed, in part, because Anthony Rizzo scored the Cubs third run on a single to right field, when a divine throw from Austin Slater was an inch late because Vogt reached for the ball instead of letting it come to him. They trailed, in part, because when Mike Yastrzemski scorched the stitching off of a ball with two on and two out in the seventh, it was just enough enough for Kris Bryant to make a diving grab. [19659909] And they took the lead, in part, because Pillar punched Dominic Toretto's nos button when heading up the line, and beat the throw to keep the inning alive

Then Austin Slater did this:

And then Joe Panik did this:

Will Smith did not pitch the ninth inning. This is almost certainly because Smith had pitched three times in the last four days, and the Giants have been openly trying to keep their pen rested

Still, with the trade deadline less than a week away, it's worth noting. If nothing else, it served as an opportunity for Sam Dyson, who was given closing duties. Dyson quickly retired two batters, before getting into a bit of a mess, walking Victor Caratini, and allowing a single to Addison Russell. But, with Tony Watson warming up in the pen, Dyson got Schwarber to pop and end the game.

Speaking of relief arms, Drew Pomeranz made his first bullpen appearance of the year, and was magnificent, allowing no baserunners in two inning, while striking out four. He threw 23 of his 29 pitches for strikes, and got six swing-throughs.

The two innings are far too small to draw any conclusions from, but still – be my guest

The Giants came back to win for the 16th time in 19 games. Sam Dyson took the mound to "Cat Scratch Fever" and snuckled out and save. They are over .500 for the first time since they were 61-60 on Aug. 14 of the last season

A one-run win is a fuel for the fires of both "Giants are good!" And "LOL holy unsustainability" campgrounds.

And yet, above all, they're fun. They're in it. And they believe they're in it. If that's not obvious, watch the clip of Panik's double again, and listen to Duane Kuiper – tell me that he's making a call for a go-ahead hit in the eighth innings with that much more in May, and I'll show you a liar.

I dunno. You dunno. They dunno

But I bet you're paying attention.

Where are the excuses for the maple leaves now? | Tim and Sid – SPORTSNET