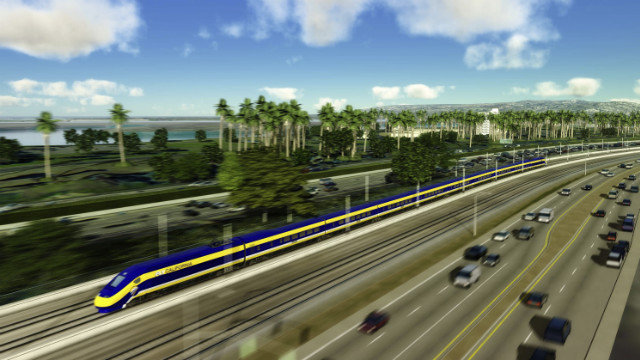 The timing is noteworthy given the current debate over the recently proposed Green New Deal that Democrats have championed as a way to fight climate change and overhaul the US economy and transport system. The plan, without getting into specifics, leans heavily into the notion that high-speed rail could go a long way toward reducing the country's carbon footprint.

Republicans who had spent the past few days criticizing the plan as impractical seized on Newsom's announcement as further evidence that high-speed rail is a bad idea.

President Donald Trump tweeted Wednesday night that California now owed the federal government $ 3.5 billion for the canceled project. "We want that money back now," he wrote. "The whole project is a 'green' disaster!"
Newsom replied in kind saying that the money was already earmarked for California. "We're building a high-speed rail," the governor tweeted . "

Who's right?" "This is CA's money, assigned by Congress for this project. First, the facts.

But these grants came with agreements, and so far California has not abandoned those agreements, meaning it's under no obligation – yet – to give that money back.

When would California owe the federal government?

Not for a few years, if ever. According to a California State Auditor report from November 2018, "violating the grant agreements could require the Authority to repay this $ 3.5 billion in federal grant funds," $ 2.6 billion of which has already been spent.

So what's in those agreements?

So, if California decided simply to build this segment of the high-speed rail track, under the agreements no money would be owed back to the federal government; even if trains were not built for the track. "Those [trains] were going to be bought in the next big segment that goes from Shafter to San Jose," said Jeff Davis, senior fellow at the Eno Center for Transportation.

If California fails to complete this section of track by the end of 2022, they would probably require another amendment to the agreement from the Federal Railroad Administration.

"At that point, theoretically, the FRA could deny that request and ask for the $ 3.5 billion back," Davis says. "But that depends on who is in the White House and running [the Department of Transportation] in December 2022 and what kind of hardball they really want to play."