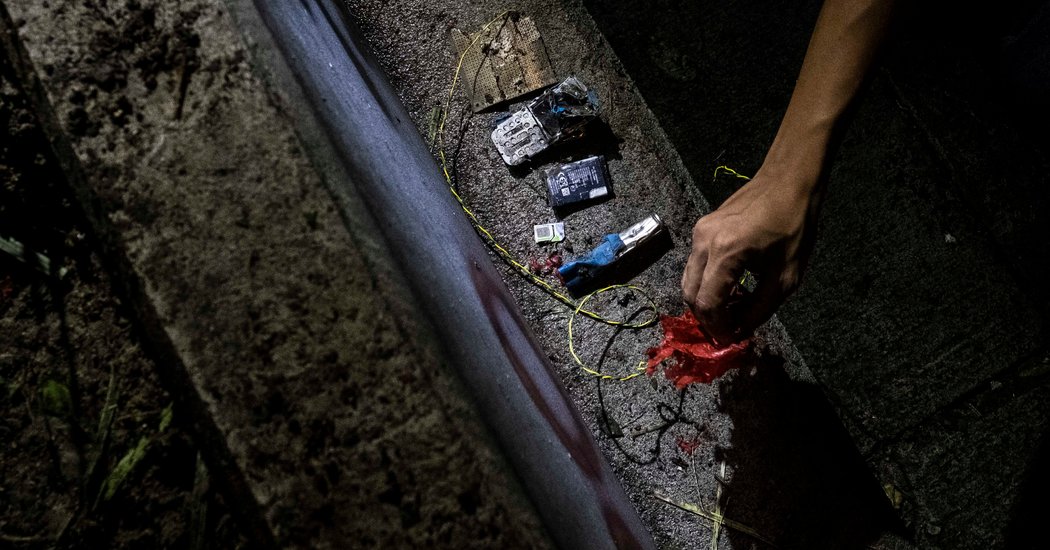 HONG KONG – A home bomb was detonated in Hong Kong on Sunday amid violent protests, police said on Monday, showing an escalation in a gun battle on the street between police and protesters.

The device was concealed in a bush and activated by a cellphone when a police vehicle passed nearby in Mong Kok District in Kowloon, Surianto Chin-chiu, superintendent of the Hong Kong Explosives Division, told a news conference.

The bomb did not cause any damage or injuries, but this is the first time such a device has been used in weeks of collisions, police said. Photos of the device showed a red plastic bag, wires and a Nokia mobile phone. The type of explosive charge he was using was not immediately known.

"We believe such explosives were intended to injure our officers," Tang Ping-kung, the deputy commissioner of police, told the same press conference.

"Those people who commit violent acts are not protesters. They are really riots and criminals that are destroying our rule of law, "Mr Tang said. "For whatever reasons they claim to fight, they can never justify such behavior as the triad," he added, referring to organized crime groups.

As protests become more violent, Chinese authorities note some of the protesters' actions. "Close to terrorism". Authorities in Beijing have warned that the military could interfere in the protests, leaving Hong Kong wondering what line should be crossed to attract such a response.

Once armed with only umbrellas to protect themselves from rain and possibly tear gas, the demonstrators have recently cut brick and sidewalk pavements, as well as knives and gasoline bombs.

In another indication of increasing violence, an officer was stabbed in the neck by a demonstrator on Sunday. Police said Monday that the veins in the officer's neck were severed and that he had undergone surgery and was in serious condition.

Police have also stepped up the firepower they use after the demonstrations began in June.

Protesters regret the use of police spray and tear gas by officers as excessive from the early days of the protests, but last week an 18-year-old high school student was shot in the chest by a police officer – a first-time demonstrator with a live round. The teenager survived.

Over the weekend, police arrested 201 people between the ages of 14 and 62, they said. The hospital administration said 79 people sought medical attention Sunday. Police said 12 employees were injured over the weekend, including the officer who was stabbed.

Protests began 19 weeks ago over a controversial bill that would allow the extradition of people in Hong Kong to mainland China for trial. Hong Kong, a semi-autonomous territory, has its own judicial system and residents have additional rights.

The bill has since been delayed, but protests continue. Demands from protesters have increased, including police investigations and universal suffrage.