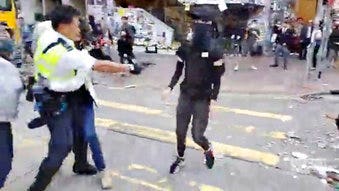 Kari Lam, leader of the anti-Hong Kong campaign, urged residents of the city to avoid engaging in illegal activities, as protests on Monday took a violent turn involving the shooting of a protesting and burning counter-protestor. [19659002] Lam told protesters that their demand for democracy was outstripped by violence, Reuters reported.

Protests began in June over a canceled plan to allow extradition in mainland China, but turned into a movement seeking other demands, including a direct election for Hong Kong leaders, and an investigation into police behavior.

The man set on fire around noon is in a critical condition at a city hospital. A video posted online shows him arguing with a group of young people before someone spills him with a lighter.

Police were also videotaped as protesters blocked train lines and roads during a morning commute to push for democratic reform calls.

A video posted to Facebook by a video producer, Cupid Producer, shows that a police officer is being held up by one protestor and then at first sight another shoots another who approaches.

Violence is likely to fuel even more passion after a student died Friday from wounds suffered in an earlier fall and police arrested six Democrats over the weekend.

Talia Kaplan and Associated Press contributed to this report