Hong Kong protests: a city on the edge after a day of violence 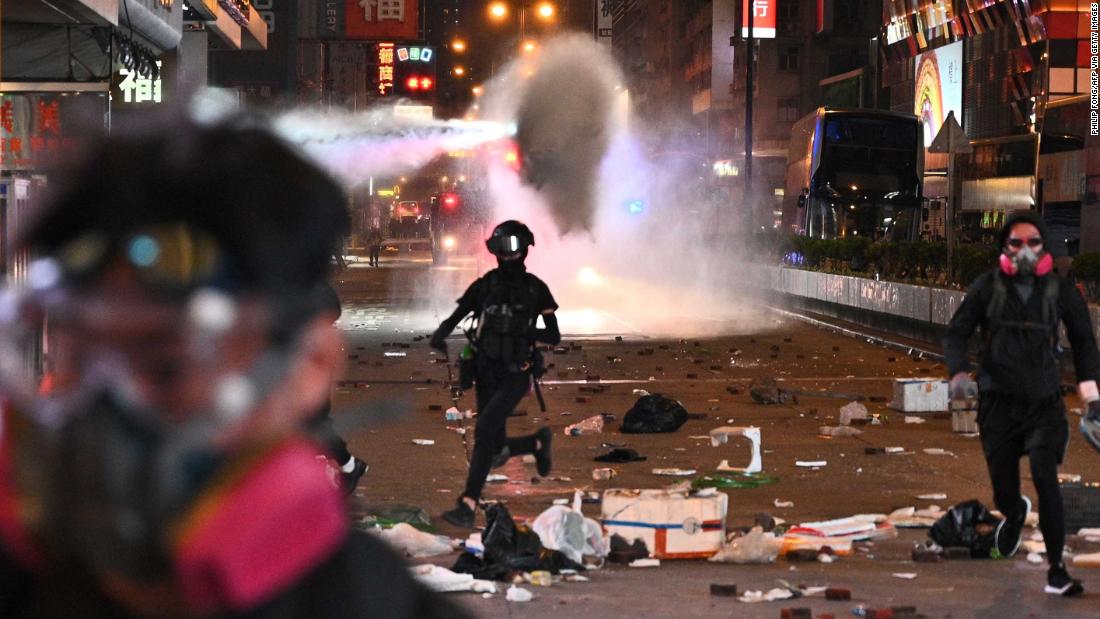 Police officers surround an area where a traffic officer shot a 21-year-old protestor and fired two more rounds of live at Sai Wan Ho on Nov. 11, a protestor is in critical condition, hospital authorities say.

Protesters use a catapult against police during a protest in Hong Kong's central district on November 11.

Riot police rally with protesters outside a shopping mall entrance during a Nov. 10 demonstration.

Protesters use umbrellas to block the mall door on Nov. 10. Protesters broke windows at a metro station and a shopping mall on Sunday and police arrested in areas in Hong Kong.

A man is assisted by a volunteer doctor after police use pepper spray during the Demon Traction on November 10th.

A police officer yells at passers-by as they try to apprehend a man in Mong Kok County in Hong Kong on November 10.

A man places a flower on a memorial for a 22-year-old student from Hong Kong's Chow Tz-lok University on November 8.

Students wearing gas masks are seen during a graduation ceremony at the Chinese University of Hong Kong on Thursday, November 7 in Hong Kong.

Firefighters are standing at the offices of the Chinese Xinhua News Agency after its windows were damaged by protesters in Hong Kong on Saturday, November 2. Police fired several tear gas cartridges and used a water cannon on Saturday to crack a rally of thousands of masked protesters demanding autonomy after Beijing indicated it could tighten its grip on Chinese territory.

Richard Chan, a candidate for county council or election, reacted after pepper spray was sprayed on November 2 by Hong Kong police.

A Halloween woman in a suit talks with a police officer in riot gear on October 31st.

A man dressed as a Joker for Halloween passes by cops on October 31st.

A protester against democracy was arrested by police in Mong Kok District on October 27 in Hong Kong.

Democratic activist Joshua Wong (2nd L) and Kelvin Lam (2nd P) shout slogans while meeting with media outside the Legislative Council (LegCo) in Hong Kong on October 29, 2019, after Wong was banned from is running for the upcoming local elections. On October 29, Wong was forbidden to face the upcoming local elections after months of major and often violent protests in the city.

Protesters collect bricks to use as projectiles on August 24th

Anti-government protesters stand on a barricade made of luggage carts during an airport demonstration on August 13.

Medics care for a woman injured face during clashes on Sunday, August 11.

Police fired tear gas at protesters during a demonstration in Wong Tai Xin on Monday, 5 August

A passenger train gestures toward a protestor on the right, who has been obstructing train doors since closing on August 5. The protestor was trying to interrupt his morning commute to Hong Kong.

A man comforting his pregnant wife near a train platform after a protest wiped the train door on 5 August.

A protestor stands in tear gas during a confrontation with police in the early hours of Sunday, August 4.

Police officers use pepper spray to disperse protesters after a rally in Shang Shui on Saturday, July 13.

A demonstrator sprays paint on a camera at the Hong Kong Legislative Council building, where protesters break through on Monday, July 1.

A police officer used pepper spray during a clash with protesters on July 1.

A protester wearing a "revolution" T-shirt walks past cry crypto along the way saying "Live HK."

Police detained protesters near a government headquarters in Hong Kong on July 1.

A top view shows thousands of protesters marching across a street in Hong Kong on Sunday, June 16.

Protesters confront police during a rally on June 12.

By the morning of June 12, tens of thousands of mostly young people had

a demonstrator holding a sign during a rally on June 12.

Police officers blame protesters during clashes on Monday, June 10th. This is a continuation of the protests that started the previous day.