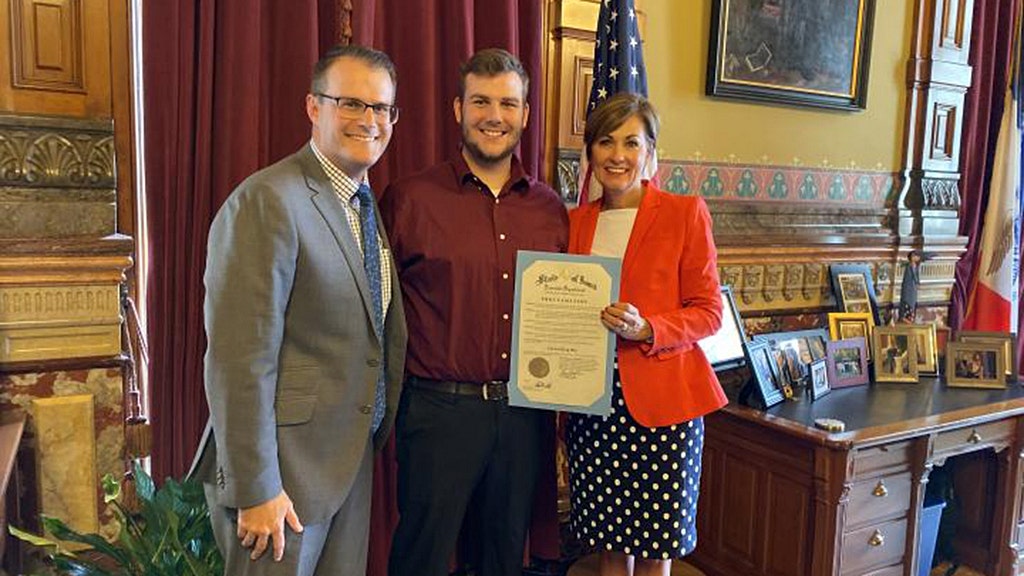 Carson King, the man who raised over $ 1 million for children's charity after asking for beer money on television and was later called out for old tweets, still receives a day and a beer named after him in his native Iowa.

King, 24, made headlines earlier this month when he went to ESPN's College Gameday recording at the University of Iowa, asking people to send him money for beer. His signboard read "Need to Fill Bush Light" and included information on how to send him money through Venmo, the popular money transfer application.

THE DONATION OF THE ACTIONS OF THE WRITING MACHINES AFTER THE LIGHT IS TAKING THOUSANDS OF DOLLARS: "THIS IS THE BEST THING WE ACCEPT ALL THE YEARS"

Soon after, Busch Light decided to balance the donation ̵

1; saying they would send King a year's beer delivery with his face on the can.

But after King's good deed was picked up by the media, a reporter on De's register Maine, working on King's profile, found two racist jokes, which he published in 2012, when he was 16, according to reports based on something from Comedy Central's "Tosh.0", "comparing black mothers to gorillas and another, casting light on black people killed in The Holocaust. "

King went out of his way for express ess remarks and Busch Light severed ties with him.

Saturday, September 28, 2019 is Carson King's Day in Iowa.
(Office of the Governor of Iowa)

"People like Carson King demonstrate that Iowa Nice is not just a slogan but a way of life," the proclamation says. "Carson King can show who we are as a people, not only by selflessly donating to a worthy cause, but by spreading the message of generosity." King said he is now trying to raise $ 2 million for the University of Iowa Stead Children's Hospital.

In addition, the Iowa Brewing Company said they were "applauded" by the Des Moines Register and Anheuser Busch's actions, saying that people are growing and changing.

"We witnessed your growth through your later content on social media and accept your apologies," the brewery said. "We believe that your selfless fundraising act for the University of Iowa Stead Children's Hospital is a truly noble act."

Subsequently, the company stated that it was naming a new Pilsner beer, named "Iowa Legend" after it, and planned to donate $ 1 "of every pint and 16-ounce can be sold to your cause until the lot is sold out."