Islanders 5, Bruins 4: Barzal, Palmieri, Bailey, Eberle and Nelson score in a win in the 5th game over Boston 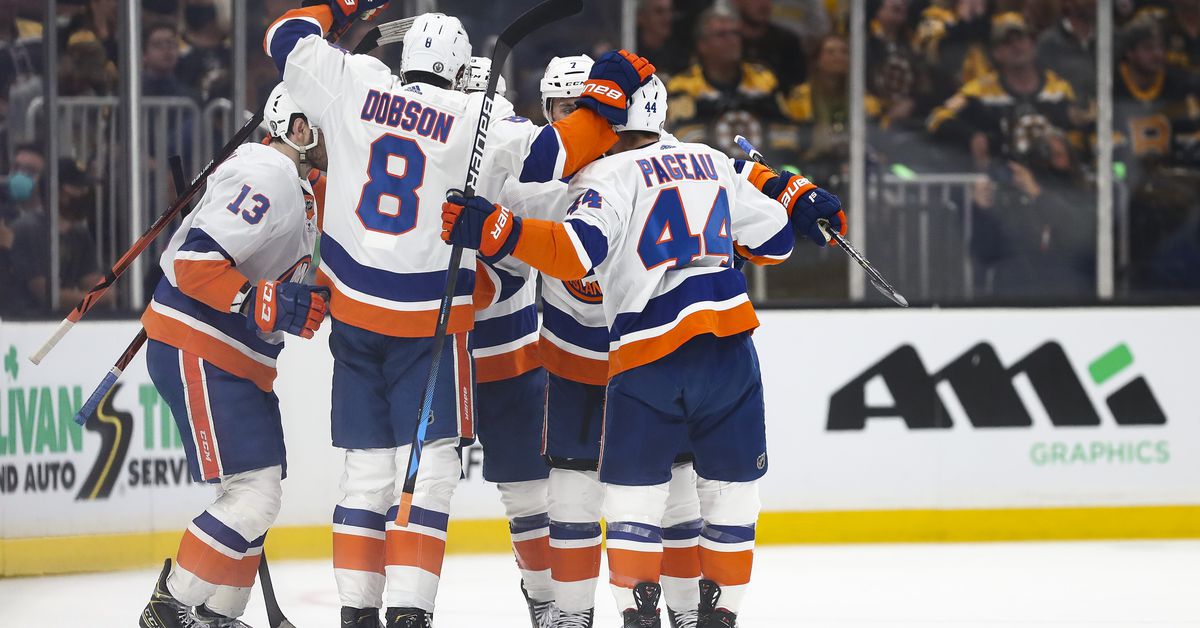 Well, that was quite the game. There must be a full moon, or mercury in the gatorade, or something, because the New York Islanders scored three goals with a powerful game, something they didn’t do from that crazy 5-minute major against the Detroit Red Wings more than three years ago.

Those three goals for a powerful game helped the Islanders take a 4-2 lead, then a 5-2 lead after Brock Nelson scored early in the third period, but the Bruins would come back to make it 5-4. The Bruins definitely dictated the game for most of the game, but these annoying islanders have bent but not broken and will now have a chance to win a place in the Colosseum conference final on Wednesday night.

David Pastrnak opened the scoring in just a minute and a half, capitalizing after Boville was (extremely clear and never penalized) to be chased by Brad Marchand behind the net, prompting him to clear the puck that made its way to Pastrnak. He has a laser shot and no matter how annoying it was to see Varlamov give up another early goal, this one really wasn’t on him.

After that first goal, Bruins smelled of blood and Marshan almost made it 2-0 after blowing an incredible chance in a wide open net, instead sending the puck through the fold.

It was all Bruins in the first 10 minutes, although the Islanders could play by force after Nick Richie (fair play, definitely not a penalty, not in my NHL!) Slammed his elbow and hit Scott Mayfield in the head while he was on his knees. trying to play the puck. No call was made there, but the islanders received one of the weakest calls of the night, a sharp call from Sean Curali after interfering with Noah Dobson’s ability to strike.

In the power game, JG Pageau won Facebook, the puck reached Dobson, who found Matt Barzal, who pushed it past Rusk in the old toy department to tie the game to pieces.

Curtis Lazarus headed for Bruins’ room after a strong blow from Adam Peleh against the boards, where the worst came out. Matt Grzeltsik was sent to boxing after entering the play in front of the net, apparently with the whole purpose of cross-checking Leo Komarov. Josh Bailey, an elite performer in the playoffs, put Kyle Palmieri at the very end of the power play to make it 2-1. Bailey’s pass bounced off both of Connor Clifton’s skates and went straight to Palmieri, who had a hit.

The Islands were pushing after a 2-1 rise and after a while in the Bruins area, Pazhou made it incredibly clear that he partially set 2 on 1 with Rabbit and Palmieri. Zajac failed to get a pass, but then the islanders managed to keep the puck in the area and bring Palmieri alone to Rask in front, but Rask saved.

Pastrnak hit the crossbar, but the islanders could not breathe easy for this almost missed mistake, because Marshan would bypass Ryan Pullock and Brock Nelson (who Cassidy aimed at the match “Perfect Line”) and took Varlamov out of position and scored.

Varlamov had to make several key saves in this game to keep the islands in it, including Bergeron, who bounced off McAvoy’s rebound, and hit Taylor Hall after a turn.

It was all Bruins after they equalized, but Anthony Boville would make a great game behind the net to find Pajo, who made a great pass to Josh Bailey in front, who made it 3-2.

One of Trotz’s main adjustments in this game was the exchange of Pageau and Nelson lines, which allowed him to draw Pageau more against Bergeron, as Nelson was absolutely crushed by this line throughout the game. This change also brought dividends here, starting a little Boville and setting Bailey’s goal.

The islanders went to the power game again, in a very frank cross-call against Chris Wagner, who grabbed his wand at Barzal’s head.

In this power game, Jordan Eberle would make it 4-2 after Barzal took the puck from him with a fantastic ice pass.

Inevitably, the islands would be sent to the box because makeup calls were required and because Bruce Cassidy could literally burn out spontaneously if they didn’t happen, so Eberle went to the weak talk box. However, the power play was split between two periods and the islanders survived the first 1:10 to close the second frame 4-2.

Curtis Lazar was officially excluded from the game, so Bruins was missing in his fourth center and had a new goalkeeper in the net to start. Jeremy Swayman came in for Rusk, who is apparently battling an injury throughout the series and ultimately looks deadly in this game.

Varlamov was the best penalty, who made some key saves, and Pastrnak hit another crossbar to keep 4: 2.

Swiman made a big save for Eberle when he came out of the penalty area, but could not stop the shot of Brock Nelson after a great pass from Boville and a fantastic hold of the blue line by Pelech. The score of 5-2 seemed like just insurance, but it was more important than we would have thought at the time.

After Nelson’s goal, Bruins really took over, and I think every Islander fan hoped we could hold on, as it seemed that Bergeron and friends were on every other shift.

Marshan and Pastrnak had 2 on 1, but Pastrnak shook the shot after a great game in defense of Peleh, but then Peleh was sent into the box after an extremely weak attachment, which was even worse than the weak cut.

Pastrnak scored his second power play to make it 5-3.

Varlamov was key after that goal, saving Hall and Pastrnak to keep the islanders in it. Then Bergeron obviously sent the puck over the glass and the islanders returned to the power game.

This time, Bruins received the criminal murder, as the islanders played the advantage of man more to burn two minutes more than anything else.

After Bruins’ assassination, Craig Smith’s shot went wide and Taylor Hall almost took the rebound, but his shot just missed. Palmieri had a chance for Swayman, but his shot eventually left the zone and put Marchand and Bergeron 2 on 1. They became greedy with the pass and Pullock managed to break it, and then Marchand still got a good shot that Varlamov had to stop.

David Kreichi, who should probably have been sent off for a copy of Barzal, but came down with a $ 5,000 fine but definitely not capable of dirty games, no sir, got hit in the front after Varlamov made a good save and the puck went out Varlamov’s skate to make 5-4.

At that moment, Barry Trotz called a time-out, and the Islanders were better, closing the game, even when the Bruins pulled Suyman by about a minute and a half.

It was nervous all the way, but eventually the Islanders would leave Boston with a 5-4 hand-to-hand victory.

Then it’s time to get noisy as we return to the Colosseum for Game 6. We can see the islands reach the conference finals in recent years for the first time since the playoffs in 1983 and 1984, I believe. It’s been a long time. Come on guoooooo !!!!!!