Japan launched its first launch in 2019 on Friday, using the small Epsilon missile to launch seven satellites, including the RAPIS-1 demonstration mission. Epsilon rose from the Uchinura Space Center at the beginning of a nine-minute, 17-second window that opened at 09:50:20 local time (00:50 UTC). Innovation Satellite for Demonstration of Payload, RAPIS-1, for Japan Aerospace Exploration Agency (JAXA). Also known as the Demonstration Satellite for Innovative Technologies, this spacecraft aims to test components in orbit for potential use in future missions.

The 200-pound (440-lb) satellite has a one-meter (3.3-foot) cube, and was designed by Axelspace along with JAXA. RAPIS-1 will work in synchronous solar orbit.
RAPIS-1 will work for at least a year. During this time, he will test several technologies in orbit. These include field-based programmable grids (NBFPGA) that will be evaluated for use in future integrated circuits, payload with X-band communication comprising a high-speed transmitter and medium gain antenna and a response control system for [19659002] Other experiments include a particle and a star monitor that includes deep machine learning to determine the attitude of the satellite.

Fireant is a low-power miniature receiver that uses navigation satellite signals to track the position of RAPIS-1 in orbit.

Finally, the satellite will be powered by a prototype of lightweight solar grilles consisting of five lightweight panels mounted on an expandable paddle that will be extended after RAPIS is in orbit around 100 watts. 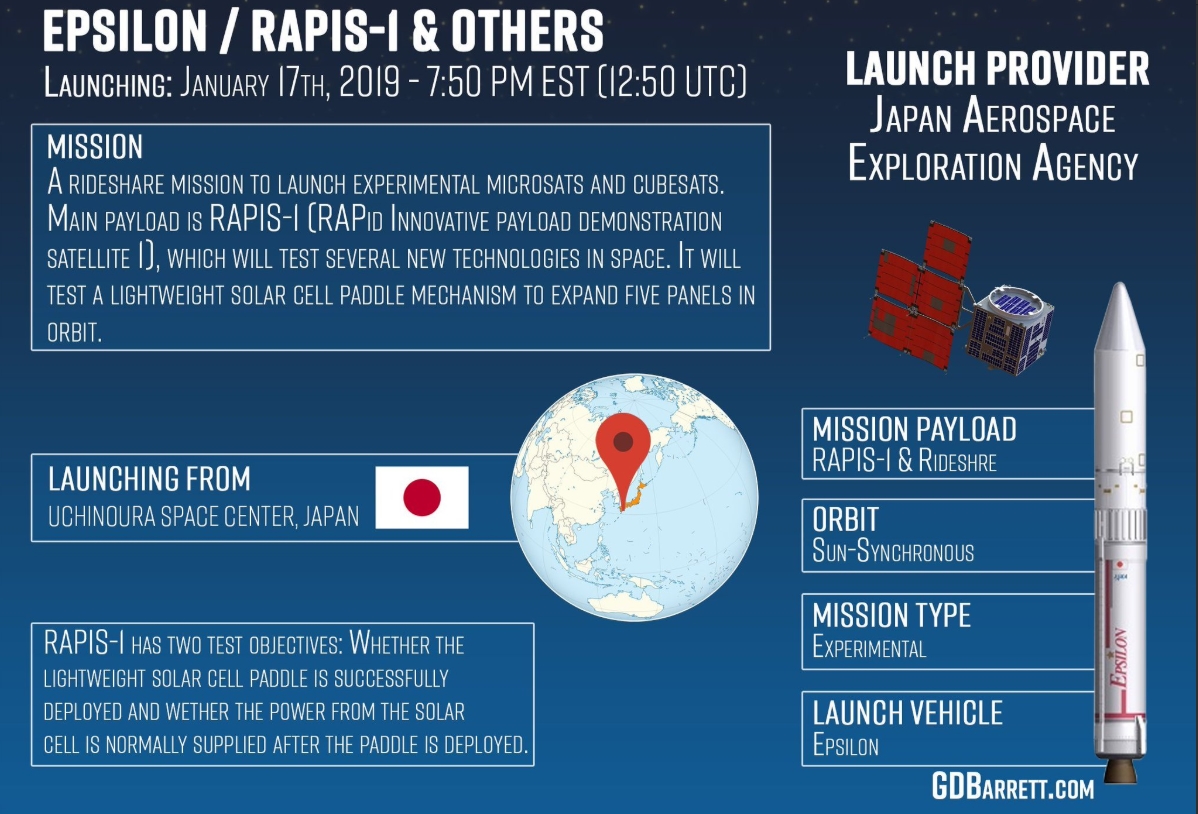 Six small satellites accompanied RAPIS-1 during his climb on Friday.

This included Astro L ive Experience 1 (ALE-1), a 68-pound spacecraft for the Japanese company Astro Live Experiences, which will be used to generate artificial meteor showers. The satellite will emit small pellets into the atmosphere – each with a diameter of about one inch (0.4 inches) in diameter – that will burn over a certain area to enjoy the viewers. ALE-1 is a prototype designed to demonstrate the concept before larger satellites are launched to offer this service in the future. Hodoyoshi-2, also known as RISESAT, is a 50 kilogram (110 pound) satellite for an international research consortium led by Tokyo University. It has a highly accurate telescope to explore how Earth reflects sunlight, two cameras for transient light event recording (TLE) – a phenomenon in the upper atmosphere of the Earth – and to study the surface of the oceans. Hodoyoshi-2 also includes a magnetometer, radiation detectors, a dosimeter, and an experiment for optical communications. In addition, the satellite will be used to collect and transmit data from environmental monitoring stations.

The MicroDragon of Vietnam's National Satellite Center is a 50-kilogram satellite built to study the coastal areas of Vietnam, collecting data to determine water quality, locating fishing areas and monitoring changes in the coastline of the country.

The other three satellites aboard Epsilon were CubeSats. The OrigamiSat-1 is built on the CubeSat standard with three units, 10 in 10 by 34 cm (3.94 x 3.94 in 13.39 inches). The satellite will be run by the Tokyo Institute of Technology. Once in orbit, OrigamiSat will test the deployment of a membrane structure by observing its behavior as it unfolds its final form. The satellite is also equipped with a radio amateur amateur

NiXon University NEXON Satellite is a single CubeSat which is equipped with a camera and a radio amateur transponder. The goal of the satellite is to demonstrate its amateur radio system, which is expected to allow for faster data transmission compared to comparable existing satellites. The Aoba VELOX IV satellite is a two-unit CubeSat developed jointly by the Japanese University of Technology Kyushu and Nanyang Technology University in Singapore.

Aoba VELOX IV will test in Earth's orbit a camera designed to study the moon horizon. soon after sunset over the surface of the moon, a glowing light is observed. Once shown, a similar camera could be sent to a future mission to study this lunar orbit glow. Aoba VELOX IV will also test the pulsating plasma thrusters and transmit the subsystem telemetry to the ground for evaluation.

Friday's launch was the fourth flight to Japan's Epsilon, which was introduced in 2013. after the third rocket flight that deployed the experimental radar of ASNARO-2 on January 18, 2018 (January 17 at UTC). 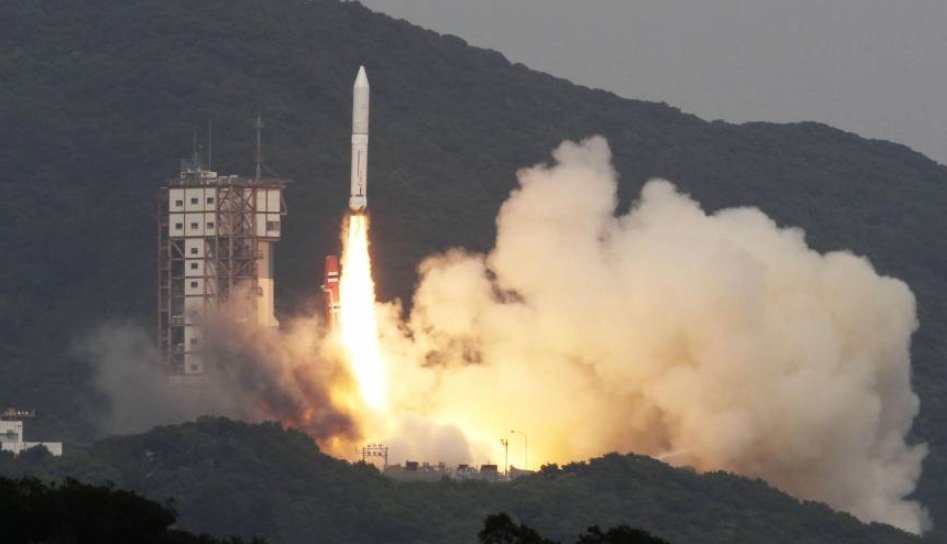 Epsilon was developed as the successor to Japan's earlier missile series, Japan used to release its smaller scientific and technological satellites. The last member of his family, M-V, was retired in 2006 with the possibility of foreign launches and rides on the larger H-IIA missile used to cover the gap before Epsilon's debut. Epsilon was designed to use the existing components by combining the above stages of MV with the first stage obtained from the SRB-A3 boosters used in H-IIA, although modernized versions of the MV stages were used from its second flight. Basically, the Epsilon missile is a three-stage solid fuel, but can also fly in a four-stage configuration with the Compact Liquid Propulsion System (CLPS). This restart liquid in the above step can provide additional impulse for the payload of the rocket and provide delivery to a precise orbit. The CLPS will be used together with Epsilon for the launch on Friday.

Epsilon launched from its Center, the start-up complex of the Uchinoura Space Center, originally built as a rack starter for the Mu series of missiles. After the withdrawal of the MV, the pad was converted to allow Epsilon to run vertically, with the former rail junction remaining in place to serve as a trail.

In the countdown on Friday, Epsilon's first phase ignited and the rocket picked up to begin climbing into orbit. The SRB-A3 engine burns in 108 seconds, speeding up Epsilon to a speed of 2.3 kilometers (1.4 miles) per second. After burning, the rocket dropped – throwing the raid 43 seconds later at a height of 151 kilometers (76 miles, 66 nautical miles). Ten seconds after completion of the separation, Epsilon spends the first ejection step, the second firing stage being carried out four seconds thereafter.

The second stage of the Epsilon is M-35, produced by the M-34, which is the third stage of the earlier MV rocket. The M-35 feeds the Epsilon flight for 129 seconds before another 96-second coast split. The third stage, KM-V2c, begins burning four seconds after splitting the second stage, burning for 88 seconds. KM-V2c is obtained from the KM-V above steps used together with M-V.

The third stage and CLPS are separated from each other 112 seconds after the burn, but the above stage does not ignite for another 285 seconds. CLPS performs a complex seven-mission to deploy each of Epsilon's payloads in their prescribed orbits, ensuring an adequate separation between them. The first burning lasted five minutes, and after a 23-minute, 38-second-six-minute coast, a 32-second burning set the scene in the right orbit for RAPIS-1. The splitting of the spacecraft came 126 seconds after the end of the second burn. When RAPIS-1 was successfully deployed, CLPS waited nine minutes and 16 seconds before performing a 17-second burn. Hodoyoshi-2 is deployed 112 seconds after the end of this burn. Twenty-three seconds later, the fourth stage performed three-second burning and a 74-second coast before putting MicroDragon.

The launch on Friday was the first of Japan in 2019, followed by a year in which the country held six successful orbital shots. This is Epsilon's first launch for just one year and is currently expected to be the only missile flight in 2019 – its next mission will be scheduled for 2020 with another demonstration satellite.

Japan has not yet announced a date for the next country. launch satellite. However, some are expected later this year, including the deployment of IGS through H-IIA vehicles and the provision of HTV-8 (Kounotori 8) vessels to the International space station aboard H-IIB.