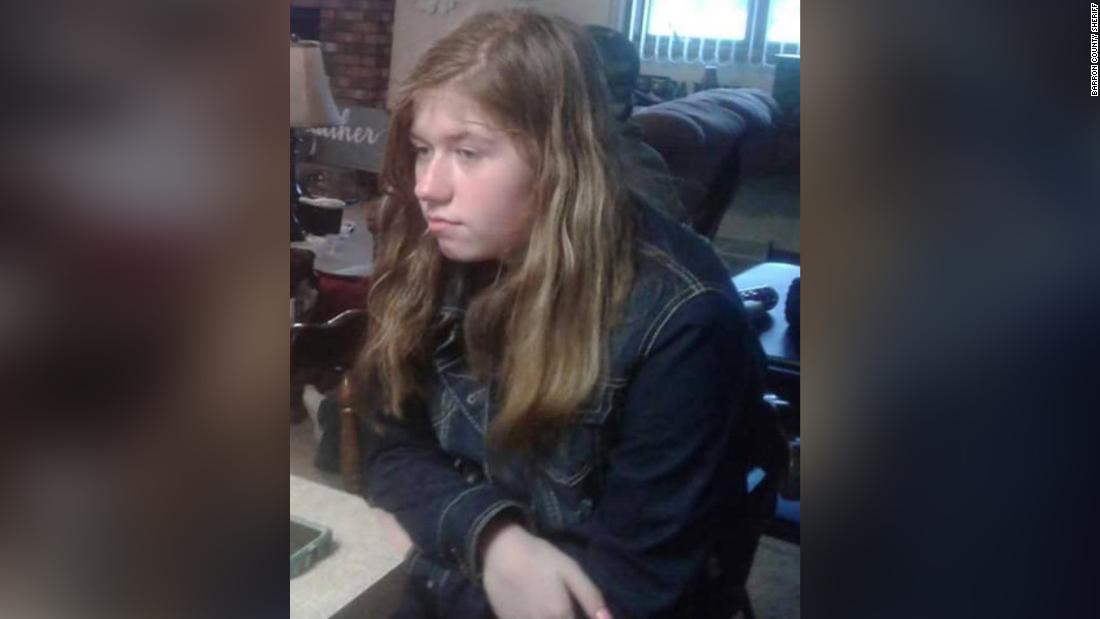 He did not know her name. Nor did he know who lived in the nearby squat, a ranch-style house with a beige siding, set back from the rural Wisconsin road by a cluster of trees shedding golden leaves.

On the third visit, he would not leave alone

Behind the wheel of his old Ford Taurus, facing the taillights on the idling bus, Patterson's elaborate plot began to take shape.

When it was over, he would face two charges of intentional homicide, along with kidnapping and armed burglary counts. He is being held on $ 5 million bail and has not entered a plea.

Investigators said he provided his chilling details of his crime in a lengthy confession, including his insistence that he would never have been caught had he just "planned everything perfectly."

Still, by his own admission, Patterson "put quite a bit of thought "into every detail.

For one, he took his father's 1

2-gauge Mossberg shotgun, and a fairly common weapon he believed would be hard to track. He grabbed half a dozen shotgun shells, then put on the gloves and wiped them for prints. At Walmart, he picked up a black balaclava.

He shaved his face and head so he would leave no forensic evidence. At one point, he stole the plates from a parked car, then switched them with his own. He disconnected his car's dome light to help conceal his appearance.

Twice, Patterson drove to Jayme's home in Barron, and northwestern Wisconsin city of 3,300 residents about 90 miles east of Minneapolis. Cars in the driveway scared him away the first time. A night or two later, he aborted his plan after spotting lights and people in the house.

She knew her father was dead

He wore brown, steel-toed boots and a black jacket and jeans. The mask concealed his round, bespectacled face. Gloves covered his hands.

Jayme was asleep in her bedroom when her dog, Molly, started barking. She got up, saw the car and rushed to wake her parents. Her father, James, 56, headed for the front door.

Patterson shifted into the park, stepped out quietly and walked to the redbrick entrance stairs. Fallen leaves surrounded by decorative pumpkins and a pair of blue lawn chairs.

Jayme and her mother Denise, 46, took cover in the bathroom. They locked and tried to barricade the door with a cabinet drawer. Mother and daughter stepped into the tub and swung shut the shower curtain.

Behind white blinds at a window to the left of the front door, James Closs stood with a flashlight.

James Closs did not move.

Get on the ground, Patterson hollered. His flashlight illuminated the window. 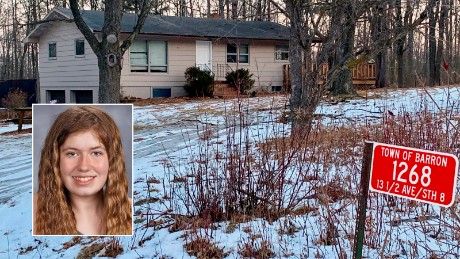 Patterson climbed the brick stairs and opened the storm door. He pounded on the wooden door. Jayme's father looked at him through a small, wrought iron-enclosed window pane in the middle of the door.

Show me your badge, James Closs demanded, mistaking Patterson for a cop.

He stared through the glass, down the chrome-plated shotgun barrel. Patterson pulled the trigger

The blast shook Jayme, who cowered in the tube. She knew her father was dead. Her mother dialed 911 on her cell phone.

He turned his head and squeezed the trigger

It was about 12:53 am. when the call came to the Barron County Dispatch Center, three miles from the Closs family home. No one spoke. Dispatchers heard screaming. A dispatcher tried to return the call and got Denise Closs' voicemail.

Outside, Patterson tried to break open the door. He ejected and spent the shell and unloaded and blast towards the doorknob. He pushed the door and stepped over James Closs' body.

And a flashlight in hand, Patterson stalked the rooms. One door would not budge. He checked the rest of the house: vacant. He returned to the bolted door. He could not kick it open. He rammed it with his shoulder, over and over. The drawer. It took 10 to 15 blows from the top half of his 6-foot, 215-pound frame before it split into two. [196590022] He ripped down the shower curtain. Denise Closs hugs her daughter in what the intruder would describe as a "bear hug."

He handed Denise Closs duct tape and ordered her to cover her daughter's mouth. When she struggled, Patterson rested his weapon on the sink and did it himself. He also bound Jayme's wrists and ankles and helped her out of the tub.

He pointed the shotgun at her mother's head and squeezed the trigger as he turned his head away.

Patterson then grabbed the 5-foot, 100-pound teenager and almost slipped on the bloodied floor on the way out. He dragged her across the yard and forced her into the trunk of the Taurus.

Three Barron County Sheriff's deputies were already on their way to the Closs home.

Patterson removed his mask. The shotgun lay next to him. He pressed the gas pedal. But only 20 seconds into his getaway, he was slowing on blinking lights and blaring sirens.

A deputy saw a maroon Taurus yield to the passing squad cars. It would not be the last time during Jayme's ordeal that law enforcement would encounter that car.

Patterson was ready for a gunfight, later telling investigators he "would probably have shot at the police" if they'd stopped him.

In the trunk, Jayme heard the sirens. Then, they faded away.

At the Closs family home, deputies discovered the bodies around 1 a.m .; Jayme was gone.

For three months, police and volunteers across North Wisconsin have searched for her. Detectives chased thousands of tips. The FBI offered a $ 25,000 reward for information. Her parents' employer added another $ 25,000.

"Jayme, we need you here with us to fill that hole we have in our hearts," her aunt, Jennifer Smith, said in a message released by relatives . "We all love you to the moon and back."

The whole time, Patterson was holding Jayme in a cluttered, single-family home near the tiny and heavily forested town of Gordon, population 650, just 70 miles north of where she lived. A sign at the front door greets visitors to the beige and brown two-bedroom home, set on 2.6 secluded acres: "Patterson's Retreat," reads

In the basement fireplace, he burned her clothes, the duct tape and his gloves. He would have Jayme changed into his sister's pajamas. He was surprised to find no blood spatter on his boots or clothing.

Patterson forced Jayme to stay under his twin-size bed, shutting her in bags, laundry bins and barbells when the visitors arrived or he left the house. When his father came on Saturdays, he turned up the bedroom radio to muffle her movements

He said that he kept her in line by yelling and hitting the walls, especially the two times he noticed she had tried to get out of under the bed. He repeatedly warned that "it would be bad to happen if she tried to come out."

During one outburst, Jayme said Paterson struck her "really hard" on her back. She stepped into a cold, unfamiliar world

For a time , he kept the loaded shotgun outside the bedroom in the case the police came.

But two weeks after the kidnapping, he put the weapon away. Patterson later told detectives he believed "he had gotten away" with his crimes.

Perhaps it was this feeling of confidence and accomplishment that led Patterson to apply for a nighttime warehouse job at a liquor distributor on the morning of January 10 – 87 days after Jayme's abduction.

"I'm an honest and hardworking guy," he wrote under his "Skills" heading on his resume. "Not much work experience but I show up to work and I'm a quick learner."

That morning, Patterson had told Jayme he was going out for a few hours. And Jayme made a decision: She would be caged no longer. She shoved the bins and weights away from the bed. Then, she crawled out of the 2½ feet that separated the mattress from the cold floor.

Freedom at her grasp, she unlocked the front door and stepped out into an unfamiliar, snowy landscape wearing only pajamas and her captor's sneakers on the wrong feet.

Jeanne Nutter was walking her dog near her driveway about 4 pm when she spotted a blond-haired girl, alone, without a coat or gloves in January chill. Nutter does not usually visit her cabin in the winter. But on this day, she was there.

"Did she run away?" Nutter asked herself of the teenager. "Did somebody dump her here?"

"I'm lost and I do not know where I am and I need help," the teen said. games do.

She held Jayme tightly as they walked to the nearest home.

Kristin Kasinskas heard her pounding on her door. Her neighbor stood out with a skinny girl with unkempt hair and oversized sneakers. "This is Jayme Closs!" Nutter told her. "Call 911 right now."

Inside, fear crapt over Nutter. What if the kidnapper came looking for Jayme?

"Get a weapon," she told Kasinskas.

"The women dialed 911 with Kasinskas' husband stood guard at the front door with a gun."

"Douglas County 911," and the dispatcher answered

"Hi, I have a young lady at my house right now , and she has said her name is Jayme Closs, "Kasinskas said."

"Yes, it's her. 19659006] Nutter soon took the phone. She said Jayme did not know where she was but told them that a young man named Jake Patterson had killed her parents and kidnapped her. Nutter said he lived a few doors from her cabin.

"We're kind of scared because he might come," Nutter said.

But the dispatcher was still stuck at the start, asking, "And she said, 'I'm Jayme Closs?'"

Catching on the panic, the dispatcher assured the women's authorities were on their way. "Ma'am, my deputy, she just wants you to lock the doors … and do not let the dogs out or anything."

Deputies pulled up to the house just before sunset, at 4:43 pm. But even then, Nutter could not trust they were safe.

When she got home, Jayme was gone. He searched the house, then went out and noticed her footprints.

Just then, a deputy ferry Jayme away from the Kasinskas' home spotted a red vehicle – and Kia or a Ford – approaching from the other direction. Jayme could not say whether she was her abductor. The deputy alerted her colleagues.

Patterson would now have restored the original plates to his car. A license plate check by police showed the vehicle was registered with someone with the surname Patterson. An officer saw a male driver alone in the car and followed her through the house they would soon come to learn was Jayme's secret prison

Two sergeants stopped the Taurus One ordered the driver to put his hands up , then opened the door.

Jake Patterson identified himself. He said he knew what this was about.