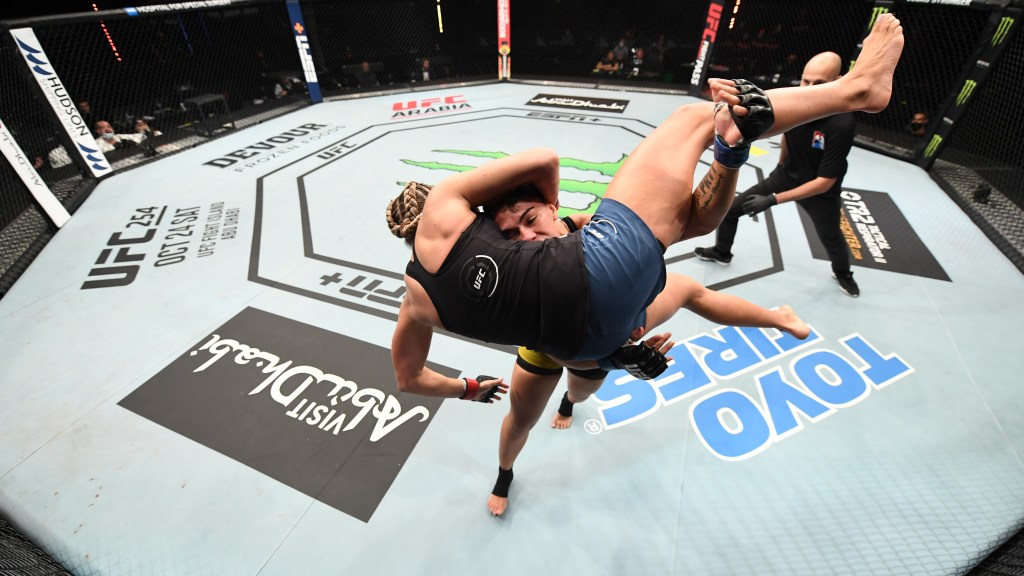 Jessica Andrade made history on Saturday when she became the first woman to win UFC fights in three divisions with a final in the first round of Kathleen Chokagian in the UFC at ESPN + 38.

The 125-pound match was the UFC’s ESPN + 38 event, which was the main event of the Flash Forum on Yas Island in Abu Dhabi. It was broadcast on ESPN +.

Andrade immediately looked to close the distance to begin the battle. She sheltered the haymakers in Chookagian, forcibly entered the clinch, then landed, all within the first minute. Chookagian avoided injury and found his way back to his feet, but the battle for the clinch resumed. Eventually, they parted, but Andrade released Chookagian with a powerful kick and began to focus his attacks on his legs.

Chookagian began to find her time in the final stages of the round when she connected with short knees. Andrade entered inside the end of the round with a helmet, followed by ground and pound before Chookagian escaped.

Andrade caught Chokagian with a powerful shot to the body just before the bell, then charged and launched another short-hook attack on the body. Chookagian fell down and the referee intervened to stop the action at 4:55 in round 1

After becoming the 12th in UFC history to win victories in three weight categories and first woman, Andrade turned her attention to a second belt with a description of the women’s champion in the men’s category Valentina Shevchenko.

“We’ll see if that brings me to Valentina,” Andrade said through an interpreter during an interview after the battle with Daniel Cormier.

The current UFC of ESPN + 38 results include: