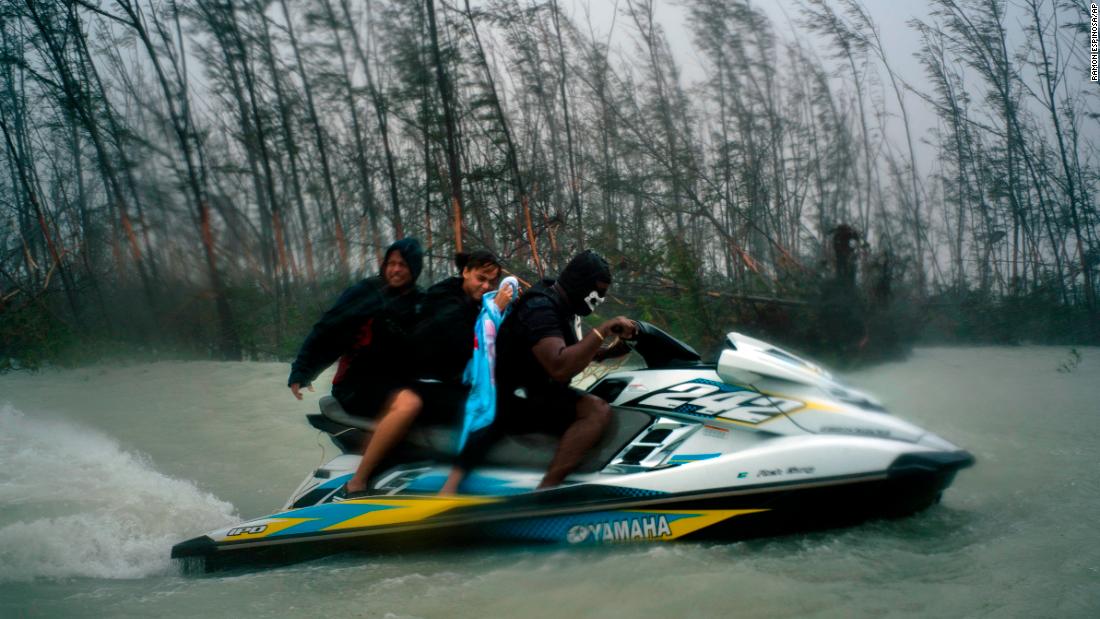 Michael Pintard, the Minister of Agriculture and Marine Resources in the Bahamas, had been making calls for help. He knew his family was in grave danger when flood waters from Hurricane Dorian shattered windows and blew through the doors of their Freeport home.

Pintard's wife heard jet skiing engines outside on Tuesday. Help came in the form of three friendly faces sitting atop two jet skis. They grabbed their 6-year-old daughter and rushed out to their rescuers.

"We thought it would be pretty much a routine ride out, but the waves were still pretty strong, and the wind was fairly high. We capsized. .., my wife and I, at least twice, "Pintard told CNN on Friday. "My daughter capsized on a jet ski as well."

The jet skis could not carry the weight of the three rescuers and the family of three. After capsizing twice, Pintard stayed behind, able to float over to a spot where he could stand.

When the jet skis came back for Pintard, the family saw the scope of rescue missions on the island of Grand Bahama, which was ravaged by the hurricane.

Jensen Burrows and d'Sean Smith, as well as dozen other jet skiers, were able to rescue 1

00 people that day. It's a story of how residents came together to save one another amid dangerous conditions.

"They did a phenomenal job, not just with us. What we saw when we came out is that they went on to go back in and over and over again, "Pintard said.

Jensen Burrows and d'Sean Smith, two friends who are part of the GB Jet Ski Club, were the men who drove their jet skis to save the minister. Jason Albury rode on board to navigate them to the minister's house and help with the rescue.

"The wind was pelting you, it felt like rocks being pelted at you. I had his daughter and my friend, and the jet ski tipped over," Smith said. "Jensen had the minister and his wife and Jensen also flipped over. He insisted we take the daughter and wife to safety first, so we did and came back for him."

Before the dramatic rescue of the Pintard family, Smith and Burrows tried to rescue Smith's cousin on Monday. Conditions were too rough to ride safely, but they had to try.

After a couple of failed attempts to ride out on Monday, the pair made it to Pioneers Way, a street south of the decimated Grand Bahama Airport. They say they saved troubled people pleading for help, among them pregnant women and even a baby in a Styrofoam cooler.

"On Monday, it was really just my two workers and Jensen, four of us," Smith said. "Tuesday was another effort that ballooned into something else."

Smith kept getting messages from his high school friend who shared videos of rising waters in his home. Within an hour, the water engulfed the first floor of his friend's home.

"I was concerned about them. I didn't want to know they died if I didn't try and help them." Smith told CNN. "That's the reason I went out in the first place."

After saving Pintard and another family, Smith was able to reach his friend's home on Tuesday.

Smith has not heard from his friend since 10 p.m. Monday. When he arrived on Tuesday morning, he screamed and screamed, but no one appeared. Eventually his friend Michael emerged on the balcony and they were able to rescue him.

The dozen jet skiers ferried rescued people to the Casuarina Bridge, the closest dry spot. Together they saved about 100 people on Tuesday, according to Rescuers and Pintard.

Thankfully, other residents, volunteers and government workers came together to provide more fuel, water and other supplies.

Grass and debris clogged the intakes of water scooters. And after two days of missions, they were running low on gas.

"The water conditions were so high, we didn't know if we were riding over water or land. I was pretty much driving my jet ski into peoples. 'living rooms to rescue them,' said Burrows, one of the rescuers.

Pintard estimated about 150 people were saved on the island on Tuesday, many who were saved on jet skis and others by other means.

He is grateful for his rescuers, yet he prays for those in his community who have lost so much.

"So many families have lost loved ones and others are displaced. My effort now is to help us rebuild and reestablish normalcy," Pintard said. "We have an indomitable spirit in the Bahamas and we will bounce back from this, scars and all."