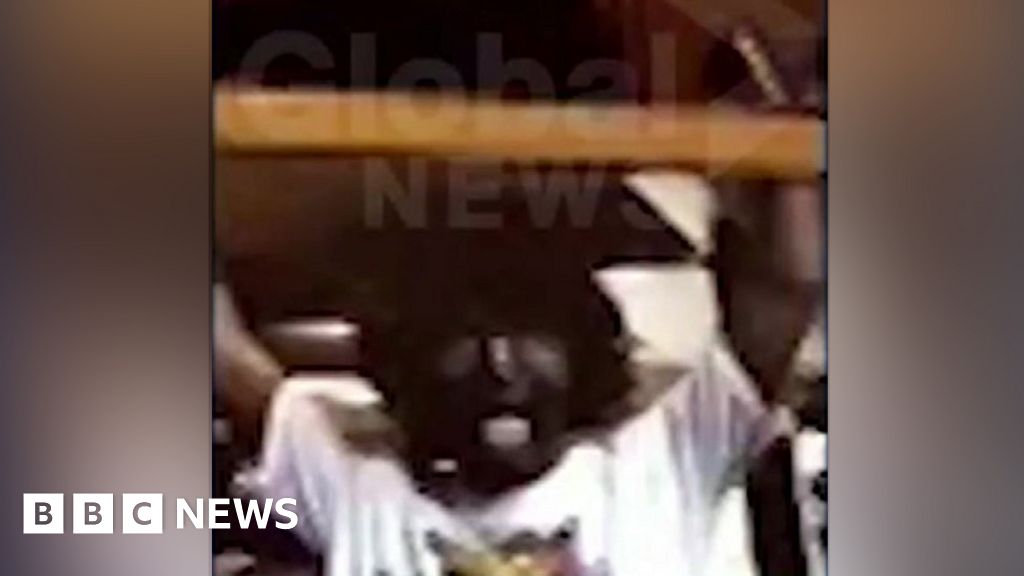 A third instance of the Canadian Prime Minister, Justin Trudeau, donning racist make-up when he was younger has emerged.

A video shows him with "blackface" ̵

1; only a day after he apologized for two similar episodes.

His Liberal Party has confirmed that the video is genuine and dates from the early 1990s.

The revelations come amid campaigning for the October 21st election, when Mr Trudeau hopes to win a second term.

His face and limbs appear to be covered in black make-up. He is seen laughing, throwing his hands in the air, sticking his tongue out and pulling faces.

Mr Trudeau would have been in his late teens or early 20s.

What about the other episodes?

On Wednesday, the embattled PM apologized for wearing a "brownface" makeup at a gala at a private Vancouver school where he taught nearly two decades ago.

The 2001 yearbook picture obtained by Time Magazine shows Mr Trudeau, then aged 29, with skin-darkening make-up on his face and hands at West Point Gray Academy.

Addressing the image, Mr Trudeau said "deeply regretted" his actions and "should have known better."

The second image to emerge on Wednesday shows Mr Trudeau performing in a talent show as a student at high school.

How did Trudeau respond?

The images are acutely embarrassing for the prime minister, especially as he has made progressive policies a signature issue .

Speaking to reporters after the Time article was published, Mr Trudeau said he had dressed up in a photo of an Aladdin costume at an Arabian Nights-themed gala.

"I take responsibility for my decision to do that.

"I should have known it better. It was something I didn't think was racist at the time, but now I recognize it was something racist to do and I'm deeply sorry. "

The practice is associated with minstrel performances – in past centuries, white actors could be seen with their faces painted black, caricaturing black people, and perpetuating offensive and racist stereotypes.

In recent years , there are several controversies involving politicians, celebrities and brands accused of "blackface", "brownface" or "yellowface".

On Wednesday, Mr Trudeau said "brownface" was "a significant thing that is very hurtful" to " communities and people who live with in tersectionalities and face discrimination. "

Mustafa Farooq, executive director of the National Council of Canadian Muslims, said:" Seeing the prime minister in brownface / blackface is deeply saddening. The wearing of blackface / brownface is reprehensible, and hearkens back to a history of racism and Orientalist mythology which is unacceptable. "

The council added that it recognized" people can change and evolve over two decades. "Later, The council issued a tweet thanking Mr Trudeau for apologizing promptly.

What was the political reaction to being?

Referring to the "brownface" episode, Andrew Scheer, leader of the opposition Conservatives, said the picture was racist in 2001 and was racist now.

"What Canadians saw this evening is someone with a total lack of judgment and integrity and someone who is not fit to govern this country," he said.

"Any time we hear examples of brownface or blackface, it's making a mockery of someone for what they live and what their lived experiences are," Mr Singh told reporters on the campaign trail in Toronto.

"This is about every young person mocked for the color of their skin, the child who had the turban ripped from their head," he wrote online.

The image was also criticized in a tweet by Green Party leader Elizabeth May.

Brian Lilley, a political columnist for the tabloid The Toronto Sun, writing about the first image to emerge, said it was a "shocking photo" and that Mr Trudeau was "a hypocrite."

"Trudeau isn't resigning over this even though he would demand that any other party fire any candidate caught in the same situation," he said.

Meanwhile, political scientist Max Cameron told the Vancouver Sun that Mr Trudeau's apology "hit all the right notes", but still had a "real dent in the strongest part of his armor" as he had built himself up as a defender

However, Dr Cheryl Thompson, who has researched the phenomenon in Canada, told the magazine it "was not nearly so denounced in 2001 as it is now".

She credited Mr Trudeau for apologizing unequivocally, but said he hoped his colleagues would not "let him off easily".

Mr Trudeau has taken a pro-immigration stance as a prime minister, and worked to appeal to ethnic minority voters.

However, his costume choices have attracted criticism in the past – including during an 2018 official visit to India, when his extensive range of traditional Indian outfits were mocked as "ridiculously overdressed."

Opinion polls indicate October's election will be a tough race for Mr Trudeau, who is seeking a second term in office.

His campaign got off to a bad start after his plane was grounded by a scraped wing on the first day. A bus ferrying journalists collided with the Liberal party's chartered Boeing last week.