Kirsten Dunst gets her star on the Hollywood Walk of Fame 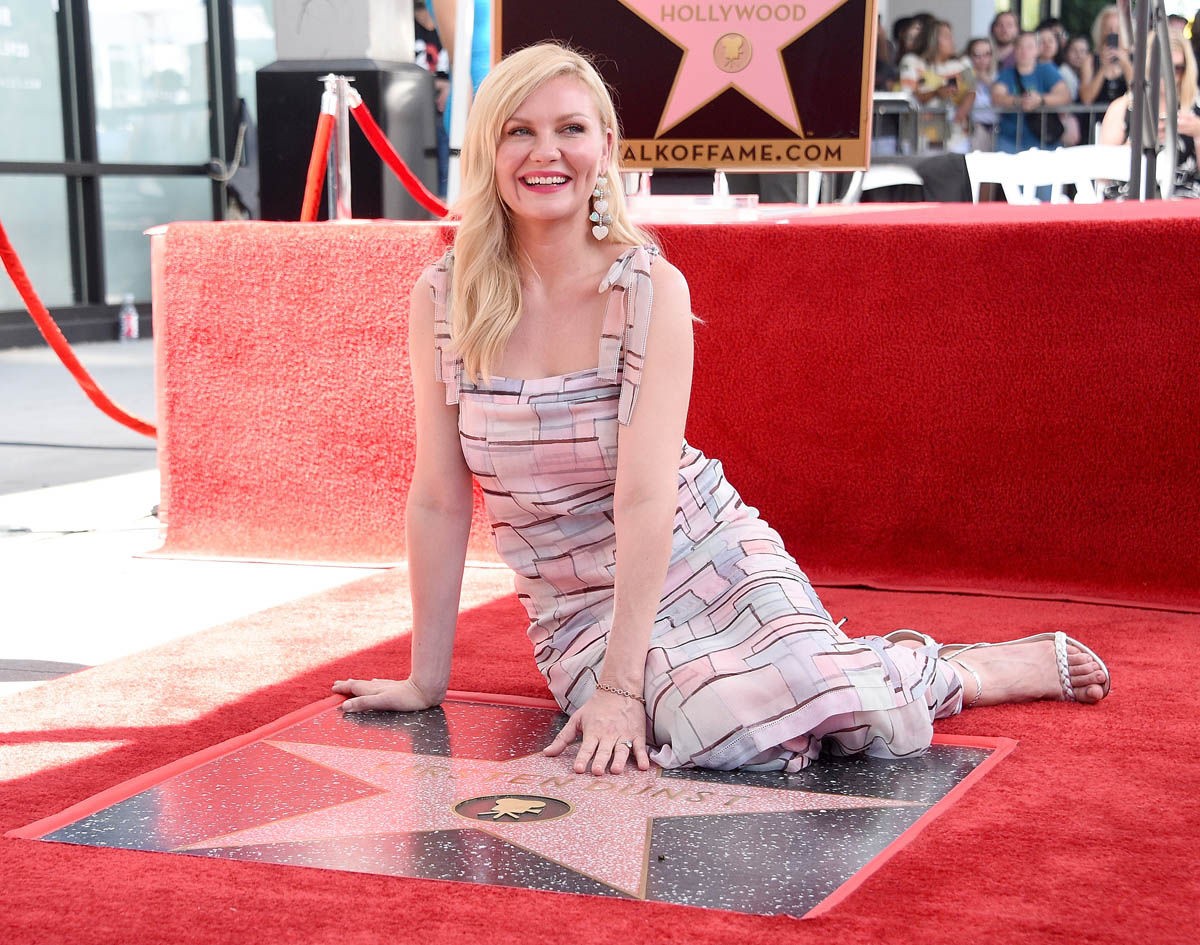 The Kirsten Durst news cycle has been a pre-long weekend gift for the past 48 hours or so. We've been treated to new photos and videos of Kiki and her fiancé Jesse Plemons as she received her star on the Hollywood Walk of Fame, which included the public debut of their adorable 15-month-old son Ennis, learned more about their pseudo -Canadian meet-cute, and she way critics and her peers on blast for not recognizing her work early or often enough within her industry. Twice.

But let's start with Jesse Plemons, AKA Landry. He and Sofia Coppola, with whom she's worked four times (a "Coppola" times, even. Sorry) were the two people to speak at her induction ceremony on Thursday. While she's currently promoting her new Showtime series On Becoming a God in Central Florida her star was in the honor of her movie work, and neither Landry nor Sofia has a tie to the series. Landry was introduced as an "actor and Kirsten's husband" at the 1

2:30 mark of this video which … are they married now? He also referred to her as his "wife" in his remarks, while she referred to him as a "partner," so the jury's out.

I love the cheese factor though. Speaking to the pageantry of the induction ceremony, Landry's mission was to both honor and embarrass Kiki.

“Standing here today, I'm reminded of one of my favorite quotes… In Hollywood, they shoot for the moon, because even if you miss at least you'll land among the stars… That's not my actual speech… We didn't share our speeches, and I just wanted to see her face as I gave the most clichéd and boring speech of all time. ”

“The truth is, I love you Kiks, and I couldn't be any prouder of you than I am right now. … Aside from the brilliant actor you are, also has the greater pleasure of getting to know you as a person outside of work. … Seeing the kind of mother, wife, daughter, sister, friend and cohort you are is why I and all of your friends and everyone else are here today and why we all love you… It's for the incredibly generous and amazing person that you are . ”

He recounts" every detail of the meeting "her as they flew to Calgary to work on Fargo and even starts a" Kiki "chant to embarrass her. It's Gold.

Sofia's speech was short and sweet, and she briefly touched on meeting Kiki "in Toronto when she was 16, and I was 29" before filming in The Virgin Suicides.

Standing at the podium, Kiki thanked Landry for his sweet, touching words, saying, “Jesse, you are my everything. I never thought I would have a partner that understands me the way that you do. ”

Speaking of honor, she adds:

“ The choices I've made [professionally] have always come from my intuition and my heart, and have people respond to what is truly a gift. ”

It certainly is. But is this recognition overdue? After all… Lainey first wrote about Kiki's Walk of Fame induction over two years ago, in June of 2017.

Kiki is somewhat of a cult icon. She's fun, a great interview, and has a solid sense of humor about herself and her career path. I could watch her 1800s "Girls Gone Wild" parody video from The Beguiled set all day. But when she sat down with Sirius XM earlier this week, as she looked back at her career, she expressed her disappointment about the type of recognition she's received thus far, and the delayed appreciation for her work.

"The things that people [enjoy] are like, 'Remember when' Marie Antoinette '[came out] – y'all panned it? And now you all love it. Remember' Drop Dead Gorgeous'? Panned. Now you all love it… It's interesting to me.I feel like a lot of things I do people like later.I have never been recognized in my own industry.I have never been nominated for anything.Maybe like twice for a Golden Globe when I was little and one for 'Fargo.' Maybe they just think I'm the girl from 'Bring It On.'

… I just feel like, 'What did I do?'… I am so chill. Maybe I don't play the game enough I mean I do everything I'm supposed to It's not like I'm ore or not doing publicity or anything I just f eel like… .I know that all you have is your work at the end of the day. And really all people really care about. I'm intelligent enough to know that and have perspective, but sometimes you're like, 'It would be nice to be recognized by your peers.' ”

You can feel the sense of frustration and heartbreak in her words, but also the tenacity. It's not like she's defeated by her choices – if nothing else, Kiki is standing by them. And social media is rallying behind her. These quotes have been picked up, days after they were recorded, and are circulating at the same time as one of the biggest professional milestones of her career. Recognition in any field always takes time, and Hollywood is known for eventually cashing in on the "overdue" narrative. It still boggles the mind that Julianne Moore's first Oscar came for Still Alice, for example.

And vividly remember getting excited about the buzz for Melancholia after Kiki won Best Actress at Cannes in 2011. And I remember how excited she was while talking about her family's response to the award at the then-Late Night with Jimmy Fallon, dishing about how her grandma would talk about it at the grocery store.

There's no doubt her family is still proud of her. But when are we going to get the “overdue” narrative going for Kiki? Is it just a matter of time or years until the timing falls on its side? (Lainey: To be clear, no one here feels sorry for Kirsten Dunst. She's never had to worry about work, when it's coming, where it's coming from. There are a lot of people in Hollywood who are more hard done by, obviously But this is a "relative" discussion, a comparative discussion Ten years before there was Emma Stone and Jennifer Lawrence, there was Kirsten Dunst She's not naming anyone, but you know the praise and recognition those two have received. happened for Kiki even though, arguably, they occupy the same spaces.)